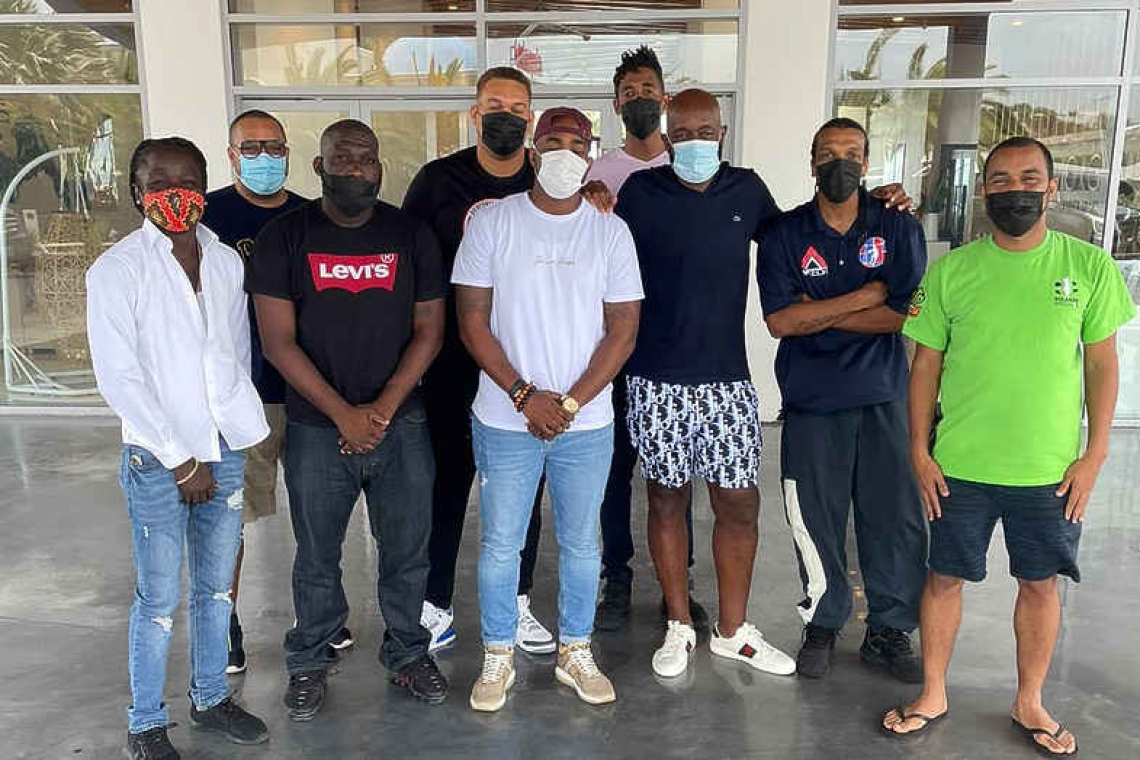 SIMPSON BAY--A weekend trip to St. Maarten by LA Lakers basketball superstar Anthony Davis with the help of Thomas Kelly - an Anguillan who resides in New York as a successful businessman and philanthropist – and an  intervention from basketball enthusiast and President of the St. Maarten parliament, Honorable Rolando Brison, is believed to be the foundation on which a basketball revolution will soon be realized.

Despite there being a number of basketball associations across St. Maarten, there is no central body that oversees the affairs of the sport and ensures that players get the exposure they deserve.
Speaking after a meeting that was held at the Morgan Resort in St. Maarten, over the weekend, Jose Helligar of the Dream Chasers Association revealed that plans are already underway to have players exposed to camps and other beneficial events including some surrounding All Star break.
“It was really such a great meeting. That was the final push we needed to all get together to make basketball get its true potential in St. Maarten,” Heyliger said, adding that “Thomas was very motivational and he has outlined the plan for how we will move forward together.” Other attendees gave remarks on the meeting.
Kerry Wilson, President of "Swally World Entertainment" and Vice President of the St.Maarten High school Athletic Association said "In my opinion the meeting was not only beneficial, but also historic in regards to the future of the Sports on St. Maarten and the Caribbean on a whole. With this partnership and proper leadership we can lead by example while breaking barriers and opening doors not only for us, but the entire caribbean in the near future. I'm delighted to have met Mr. Kelly and in my eyes Thomas Kelly is a genuis and his love for not only basketball, but the evolution of the sport in the Caribbean is genuine and I can't wait to work with him in the future to bring our common goals into fruition. I'm also glad that he pointed out how the incorporation of musical acts (entertainment) also benefits and boost not only the event, but the notoriety of the island as a go to destination. I have been saying this for years, unfortunately it's fallen on deaf ears, so I'm hoping with all this new information we can not only build towards a dynamic sporting system/industry, but also towards an innovated entertainment industry as well"
Omar Beauperthuy founder of Performance Sports Academy also shared comments "In regards of the meeting the main purpose was to bring  the various organizations together so we can be able to strategize ways in what is needed for the development of the youth on the island and I look forward to this new chapter"
Duncan van Heyningen, vice-president of the SXM NBA also attended and shared the following "I believe the meeting went well and hope that it fosters a network that can assist in growing our local basketball talent. Mr. Thomas Kelly explained projects that he was involved with in Anguilla in the past and made suggestions on how we could establish our foundation/groundwork for continuous training and assessment  programs for our youth/developing players"
Finally we heard from Alex Ferdinand, President of the St. Maarten National Basketball Association (SXMNBA) "Am grateful for the opportunity to be a part of the meeting and am looking forward to see how we can build on this great opportunity for basketball on sxm and the region"
A follow up meeting is being planned for August 25 at the Parliament. It is expected that a Memorandum of Understanding (MOU) will be signed to solidify plans to work with NBA players, associated agencies and Mr. Kelly.
Among the other ideas discussed was the possibility of using the sport of basketball to boost Sport Tourism for the island.