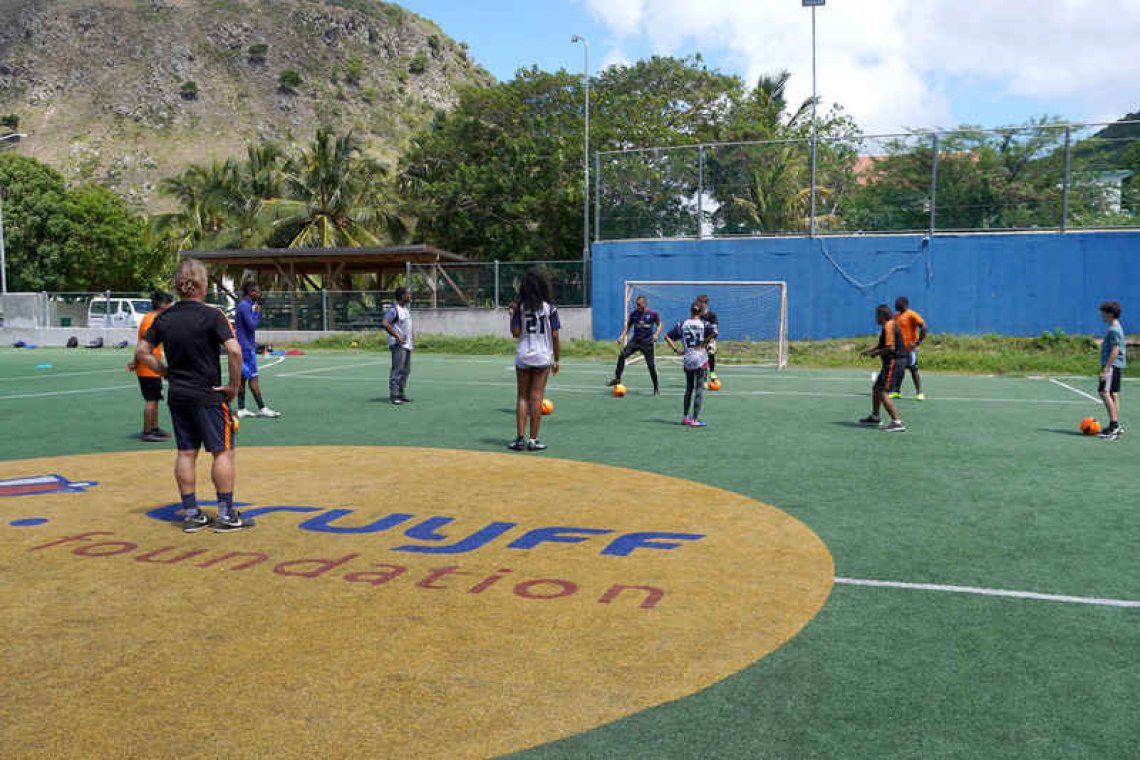 SABA—Organized by the Saba Youth Council with funding from the Ministry of Public Health, Welfare and Sport (VWS), youngsters on Saba in the first two weeks of August took part in soccer and volleyball practices offered by professional coaches from the Netherlands and Aruba.

The successful project which had a large turn-out, called the Gain Train, was initiated by the Saba Youth Council. The Youth Council approached the Public Health Department of the Public Entity Saba a few months ago to assist.
Four coaches came to Saba for two weeks of practice. While on the island, Ine Klosters and Jolanda Gudde (both from the Netherlands) of the Netherlands Volleyball Association (NEVOBO), and Bert Zuurman (the Netherlands) and Elvis Albertus (Aruba) of the Royal Netherlands Soccer Association (KNVB), also provided coaching courses. The KNVB coaches and the trainings that they provided were part of the KNVB WorldCoaches program.
Commissioner of Sports and Public Health Rolando Wilson said he was very pleased with the visit of the four coaches. “Their visit and the professional trainings that they provided fit right in Saba’s healthy lifestyle policy and our objective to keep our people, including the youngsters, active and healthy. I commend and thank the coaches for a wonderful job,” said Wilson.
The program consisted of daily soccer practices in the morning with the first session for children age 6 to 11 and the second session for 12-19 years old. Volleyball practices took place in the afternoon, with the first session 6-11 years old and the second session 12-19 years old. The coaching courses for persons 16 years and up also took place on a daily basis. The soccer trainings took place on the Johan Cruyff Court in The Bottom, while the volleyball trainings were at the school gym in St. John’s.
When the coaches arrived, the Youth Council held a reception at the Cottage Club Hotel to welcome the coaches and introduce them to the island. The program ended on Saturday night, August 14, with a gala event at Queen’s Garden to honor the coaches and all participants. The gala event included a full dinner and awards.
The four coaches were scheduled to leave for St. Eustatius on Sunday, August 15 for similar trainings with the youth there, but because of inclement weather, they could not leave Saba until Monday and Tuesday. The visit of the coaches to Saba and St. Eustatius has been financed by the Ministry of VWS.