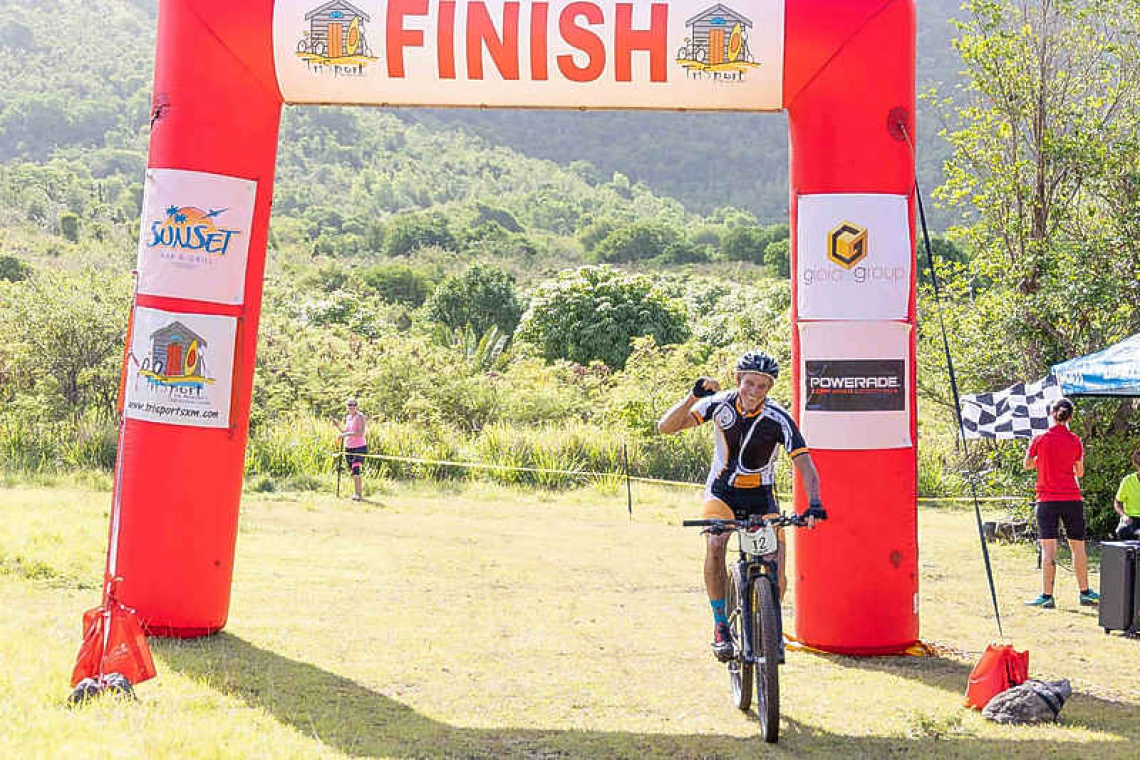 The Union Cyclisme International (UCI) national championship cross country race was held in Bellevue on a 5.3K fast, undulating course including one steep rocky descent that left no margin for error.
Maidwell (54) always a model of consistency in training, proved how adept he is at both road and mountain bike disciplines, turning in a solid, error-free ride. But, on this occasion he was no match for the prodigious talent of super-fast Otis “Oats” Paines who won the Elite Category with a six-minute gap, leaving Maidwell in second.
A somewhat disappointing turnout of 22 riders meant eligibility for the Dutch mountain bike champion came down to just five riders in the Elite category; favourites Maidwell, Dick Luttekes, Karl Spijker, and Wilmer Azcarate and Bart van der Meijden. Susy Piscione would have been the contender in the Women’s Elite category but she retired after a fall and there was no Junior candidate.
Spijker finished third, four minutes behind Maidwell while Luttekes was six minutes behind Spijker. Luttekes, usually famous for punishing his rivals, was uncharacteristically off the pace in fourth place, admitting he felt insufficiently trained and motivated.
The weather may have had something to do with it. Two days of rain led to fears of a very wet and muddy race but in fact conditions were perfect. Despite a slick and moist track at the start there was no further rain with the course continuing to dry out after each lap, with everyone agreeing the last lap was thebest.
“On the first lap it was kind of sketchy because you didn’t know how much grip you had,” said Paines afterwards. “But by the third and fourth laps, you knew you were sticking it and could push it on the corners. My plan was just to go hard from the beginning.”
The open categories saw Paines and Sandra Garnier win the Men’s and Women’s Elite race, and E-bikes was won by Julien Renaud, clocking the fastest time for the race of 1:07:54. The father and son duo of Vincent Guibreteau and Andy Guibreteau won Masters C and Juniors respectively.
Rising star Andy (16) had signed up for Elites but because it was a UCI-sanctioned race he was not allowed and had to remain in Juniors, much to his anguish. It would have been interesting to see how he matched up with Otis and Mark.
St. Maarten Cycling Federation’s Susy Piscione regretted that St. Martin has a world class track but simply not enough mountain bikers, particularly from the Dutch side.
“We decided to start a girl’s mountain bike club because it’s crazy that the two most consistent women riders are in their 50s, and we also want to organise more fun rides, like we used to have, to make mountain biking less intimidating.”
Sunday’s race was made possible by Coors Light, Boolchands, Heavenly Water, Tri Sport and Point.Com.