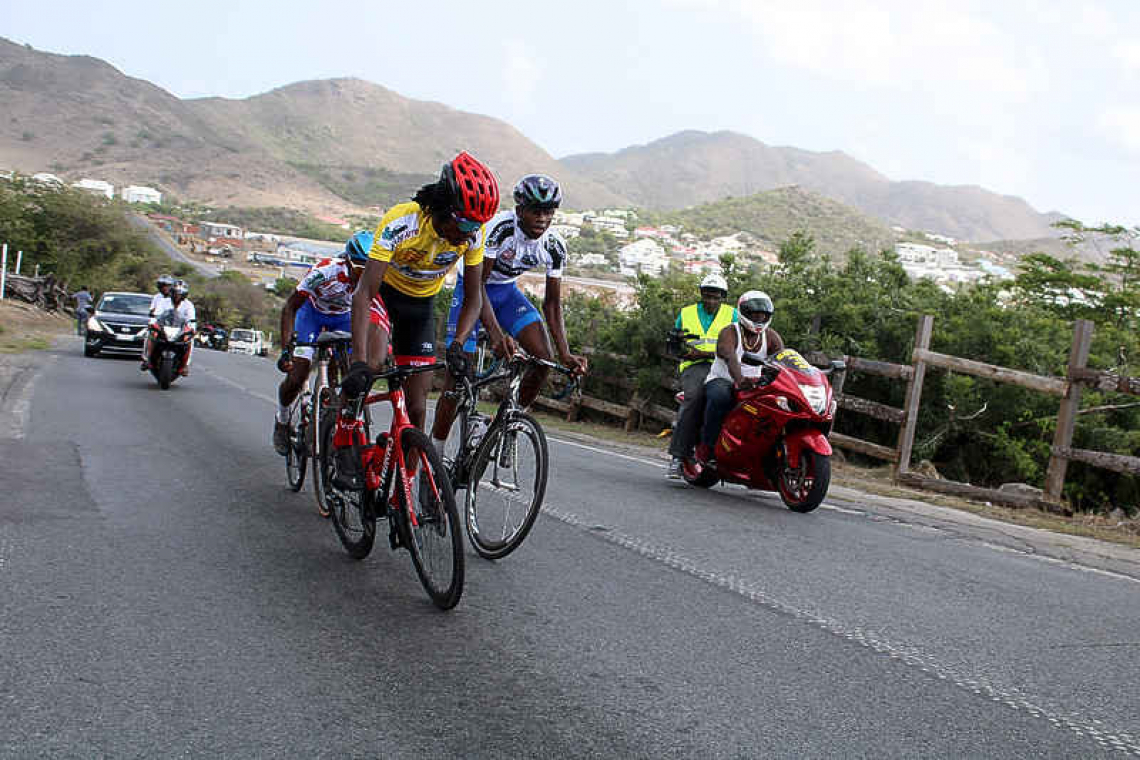 Building on excellent top five results in the Cadet Tours de Martinique and Guadeloupe, Carty is shaping up to be an excellent all-rounder, a powerhouse on the flat and a super-charged mountain goat on the climbs. He won Saturday’s first 55K stage with around a two-minute advantage before taking the yellow jersey and going on to win Sunday’s gruelling, sun-baked 70K race.
Carty and Keelian Cleonis from the Marie Galante Club UVMG were the only two leaders in a fragmented field coming int to the finish on Sunday at Chez Clement. Carty launched his attack at the bridge, leaving Cleonis unable to respond, and crossed the finish line in a blaze of glory.
No one could be prouder than his family, and his father Patricio “Blade” Carty who created this race. Blade was awarded the Collectivité Medal on Bastille Day for his work coaching a new generation of young cyclists.
Some 12 Cadets took part in the race from Clubs VCSG, Association Sportif de Marigot (ASM), and the Clubs from Marie Galante and Guadeloupe.
In the overall classification on Sunday, it was Jahkim Carty (VCSG) first, Cleonis Keelian (UVMG) second, Louis Isidor Phil (ASM) third, Kennedy Hodge Jahiem (VCSG) fourth, and Brooks Mercedes Edgar (VCSG) in fifth place.
Best Climber went to Jahkim Carty (VCSG), second to Cleonis Keelian (UVMG), and third to Edgar Brooks Mercedes (VCSG). The Best Young Rider standings saw ASM’s Louis Isidor Phil take first place, second to Kennedy Hodge Jahiem, and this Brooks Mercedes Edgar. In the Team’s Classification it was VCSG first, ASM second, and Raymond d’Argent from Guadeloupe third.
Jahkim Carty will shortly be leaving for France to pursue his education and cycling career. President of the Collectivité Louis Mussington was among a few prominent officials watching the races.