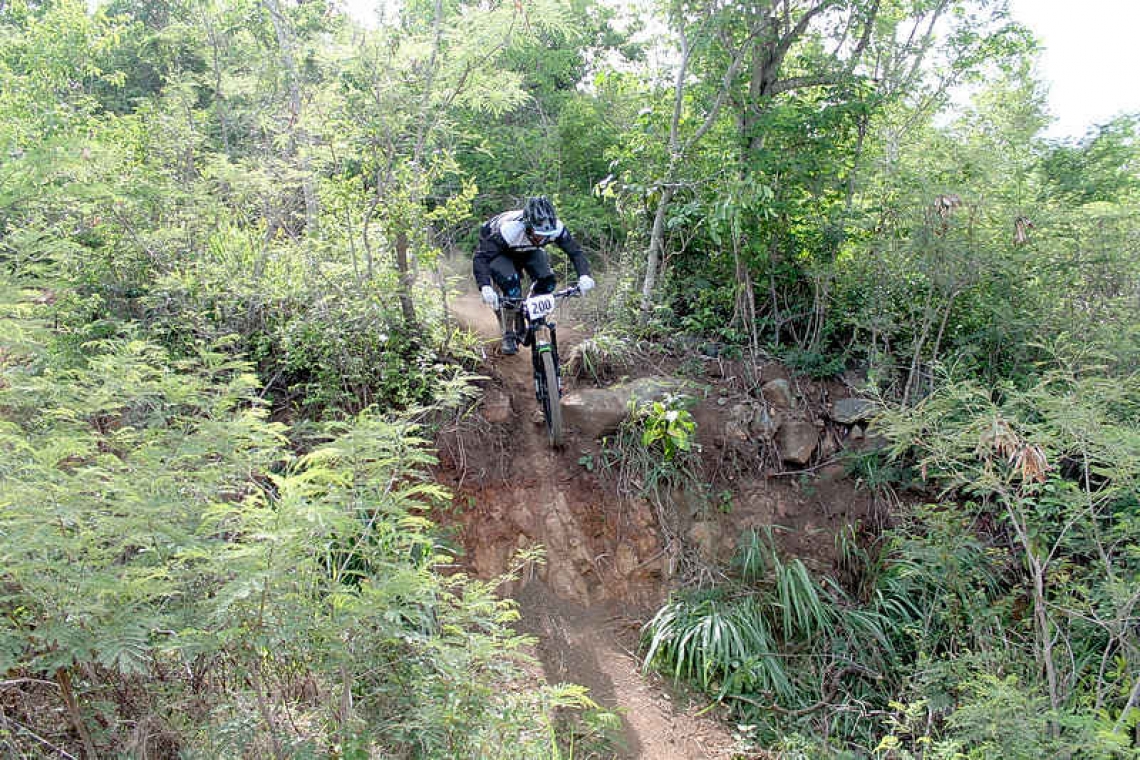 MARIGOT—Robin Charrasse was in a league of his own on Sunday when he won the COVID Downhill Mountain Bike Race in Bellevue for the second time.

With 11 mountain bikers and four E-bikers taking part this was a better turnout than the first edition, even though some expected mountain bikers from Guadeloupe could not make it, most likely due to the coronavirus restrictions.

Conditions for the race were excellent, fast and dry with a strong breeze that threatened to blow away the starting gate tent at the top of the mountain.

Riders in full protective gear were allowed three runs to record their best time for the course. Times could not be compared to the first race as the course was made longer by 300 to 400 metres. With a mixture of tricky rocky sections, steep turns, jumps, fast single track and even a two-metre vertical drop, this was not a course for the faint hearted. Fortunately, no serious accidents and a first aid person was on site to deal with minor cuts and scrapes.

Drawing on downhill mountain biking and moto cross experience learnt from his father David-- organiser of the original Caribbean Cup inter-island mountain bike series back in the day--Charrasse managed to combine blistering speed with superb bike handling to edge out his rivals.

A notable absentee however was Paco Pischney who came second in the first race. He could not make it due to a death in his family but will most likely return for the next race.

Kenny Carty from ASM, fifth in the first race, lost time coming out of his pedals on one run and crashed on another.

The race was made possible by Tri Sport, Madd Designs, DFC air conditioning, Lipstick, the Best Etencheite, IOTV, Capt. Jo Charters, Jet Extreme, Jeunesse Soualiga and Air Antilles Express. The latter donated an air ticket to the winner. Volunteers from Jeunesse Soualiga were posted at various points on the course.