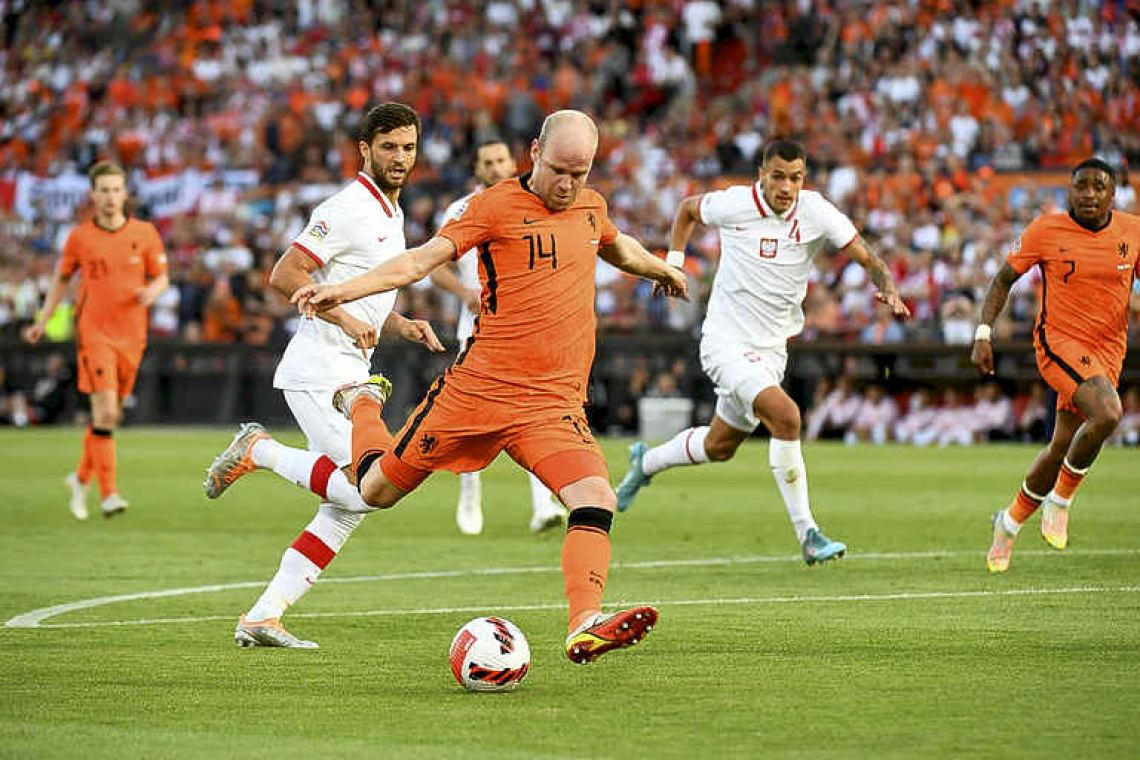 ROTTERDAM--The Netherlands came from 2-0 down to draw 2-2 with Poland in Rotterdam on Saturday evening. Memphis Depay had the chance to decide the Nations League game late on but he missed from the penalty spot.

Dutch coach Louis van Gaal reverted back to the starting eleven that defeated Belgium 4-1, but goalkeeper Mark Flekken and defender Stefan de Vrij came in for the unavailable Jasper Cillessen and Virgil van Dijk, respectively.
The Netherlands controlled possession from the start but they failed to hurt Poland, who stunned the audience in De Kuip stadium by netting with their first chance.
The Poles, seeking a first ever victory against their hosts in the Netherlands, led 2-0 just after halftime as English-born Matty Cash and Piotr Zielinski both scored, much to the delight of their sizeable contingent of travelling fans in the stadium.
Poland were without talisman Robert Lewandowski as the striker sat out through injury, but took the lead on 19 minutes when Cash scored his first international goal. He capitalised on space left by Daley Blind and fired past Flekken.
Early in the second half, Zielinski tapped in to make it 2-0, and even though the linesman raised his flag, the goal was allowed by the Video Assistant Referee (VAR).
Davy Klaassen pulled one back almost immediately from a cross, before Denzel Dumfries fired the Netherlands level in the 54th minute.
Van Gaal made a triple change with Klaassen, Steven Berghuis and Jurriën Timber going off for Teun Koopmeiners, Cody Gakpo and Jordan Teze. Wout Weghorst also came on, but the Dutch were frustrated by the visitors, who looked to waste time at every opportunity.
In stoppage time, Memphis Depay had a shot blocked and VAR intervened as it came off an arm. The ball hit the penalty spot but Memphis blasted his penalty against the crossbar. Moments later, Memphis was denied by an excellent save from goalkeeper Luksz Skorupski.
Poland held on and took a point, while the Netherlands will be frustrated with their inability to turn so much possession into a victory towards the end.
The result sees the Dutch top Nations League Group Four with seven points from their three games, three ahead of Belgium and Poland.
“I missed and unfortunately that can happen,” Depay told Dutch public broadcaster NOS. “Now it feels like a defeat. It was a difficult game. Poland were compact and the spaces were super small, but we have shown that we have fight in us. We continue to believe in ourselves, but today was difficult. The 0-2 was a mental blow, but we handled it well. It wasn’t our best game, but we kept fighting,” Depay said.
Tomorrow, Tuesday, June 14, the Netherlands face Wales at home in their final match of this international period.