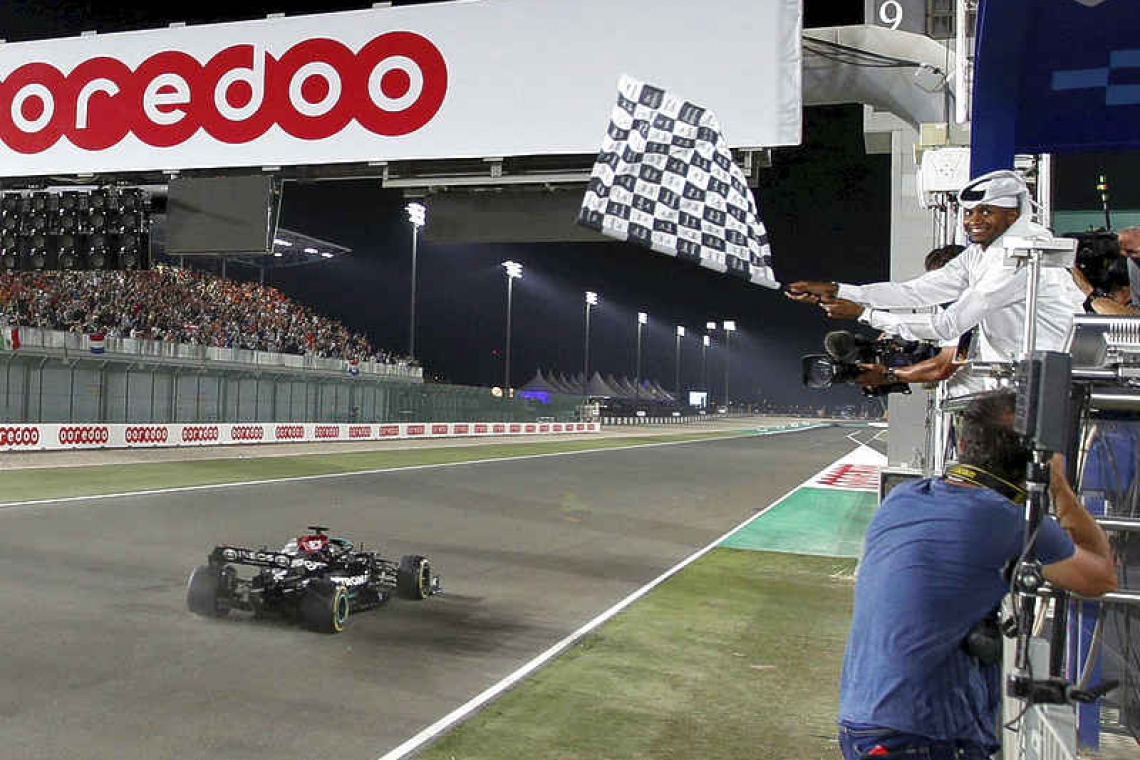 Red Bull's Verstappen was second, after starting seventh following a five-place grid drop for failing to respect warning flags in Saturday's qualifying, but took a bonus point for fastest lap.
Double world champion Fernando Alonso was third for Renault-owned Alpine, the 40-year-old Spaniard's first podium finish since he was second in the 2014 Hungarian Grand Prix with Ferrari.
"It was pretty straightforward, it was pretty lonely at the front," said Hamilton, who led from pole position and was never challenged over the 57 laps of the floodlit night race that finished under virtual safety car conditions.
"Of course, I enjoy those races where you're battling through but we needed those points today, so I think a real solid job from the team... Bring on the next two."
The win was Hamilton's seventh from 20 races this season, second in a row, and the record-extending 102nd of his career also continued his strong pedigree at new circuits on the calendar.
The Briton took the chequered flag, waved by Qatar's Olympic high jump champion Mutaz Barshim, a hefty 25.743 seconds ahead of Verstappen.
Verstappen, who has nine wins this year, carried out another solid piece of damage limitation as Red Bull cut Mercedes lead in the constructors' standings from 11 to five points.
"Of course, our starting position was a bit compromised but luckily we had a really good start," said Verstappen, who was fourth by the end of the opening lap and up to second after the fifth.
"I know it's going to be difficult to the end but that keeps it exciting. It's going to be a tight battle until the end."

Saudi Chance
The Dutch 24-year-old can still win the championship with a race to spare at the next race in Saudi Arabia if Hamilton fails to score.
Team boss Christian Horner will have to watch his language then after collecting an official warning from stewards for referring to a "rogue marshal" in a heated reaction to Verstappen's penalty.
Mexican Sergio Perez was fourth for Red Bull with Frenchman Esteban Ocon fifth for Alpine in a race livened up by a spate of punctures late on among those trying to make a single pitstop work.
They included Hamilton's team mate Valtteri Bottas, who was the only driver still to pit when his front left deflated after 33 laps.
The Finn, who also had a three-place grid penalty, pitted from third place and returned in 14th with a new front wing and set of hard tyres. He was then told to retire from 12th with 10 laps to go.
Lance Stroll took sixth for Aston Martin, ahead of the Ferrari pairing of Carlos Sainz and Charles Leclerc. Lando Norris finished ninth for McLaren and Sebastian Vettel 10th for Aston Martin.
Williams pair George Russell and Nicholas Latifi suffered late punctures, with the latter parking up beside the track and triggering the virtual safety car, rendering needless a final Verstappen stop for fresh tyres to be sure of fastest lap.