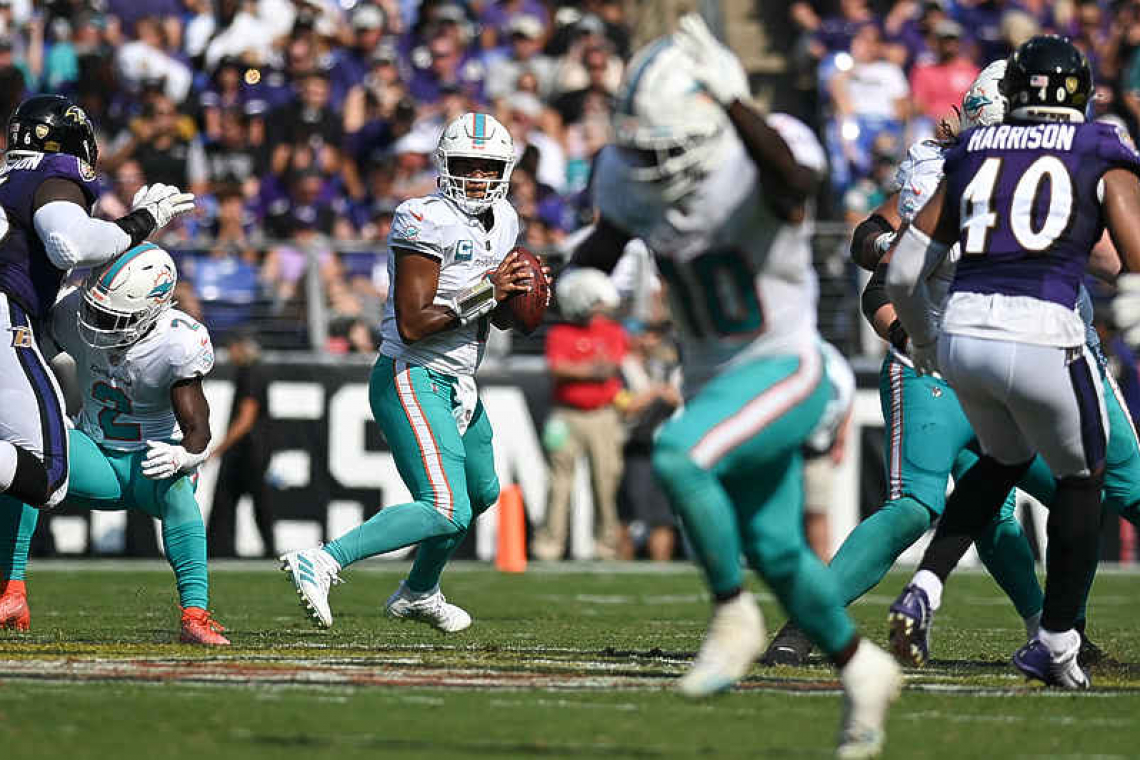 BALTIMORE --Tua Tagovailoa rallied the Dolphins from a 21-point deficit in the fourth quarter and his sixth touchdown pass of the game with 14 seconds remaining pushed Miami past the host Baltimore Ravens 42-38 on Sunday.

Tagovailoa shrugged off two first-half interceptions and threw a 7-yard laser to Jaylen Waddle for the go-ahead score in the fourth quarter, marching 68 yards in six plays to respond to Justin Tucker's 51-yard field goal, a kick that gave Baltimore a brief 38-35 lead with 2:18 on the clock.
"Never did you think we're going to have that many balls thrown over our heads," Ravens coach John Harbaugh said. "That just can't happen."
NFL Network said the fourth-quarter, 21-point comeback was the first by any team in the past 12 seasons.
Tagovailoa completed 36 of 50 passes for 469 yards and six TD passes, outdueling Ravens quarterback Lamar Jackson. Jackson had nine carries for 119 yards and threw three TD passes for Baltimore, but it wasn't enough. Six TD passes in a game is tied for the second-most in NFL history.
Miami head coach Mike McDaniel is 2-0. The Dolphins have won the first two games of the season for the first time since 1996 in the Jimmy Johnson era.
Jackson's 79-yard touchdown run looked like the nail in the coffin for the Dolphins near the end of the third quarter. Baltimore led 35-14.
"I was really hoping we'd get some adversity this game and see how we'd respond to a deficit," McDaniel said. "And apparently they took me way too literal."
But Miami outscored the Ravens 28-3 in the fourth quarter as the comeback began with Tagovailoa's pair of TD passes to Tyreek Hill and another to River Cracraft.
After a quiet three quarters, Hill's second score on as many Miami possessions at the 5:19 mark of the fourth quarter tied the game.
Waddle and Hill had 11 receptions apiece in the game, with Hill totaling 190 yards receiving and Waddle gaining 171 yards. No wide receiver tandem has had 170-plus yards and two touchdowns each in the same game since at least 1950, per the NFL.
Baltimore had two 100-yard receivers: wide receiver Rashod Bateman (4-108) and tight end Mark Andrews (9-104). A final heave from Jackson as time expired fell incomplete with Bateman fighting for the ball in the front of the endzone.
Wide receiver Devin Duvernay left the game on the final drive with a concussion. He opened the game with a 103-yard kickoff return for a touchdown.