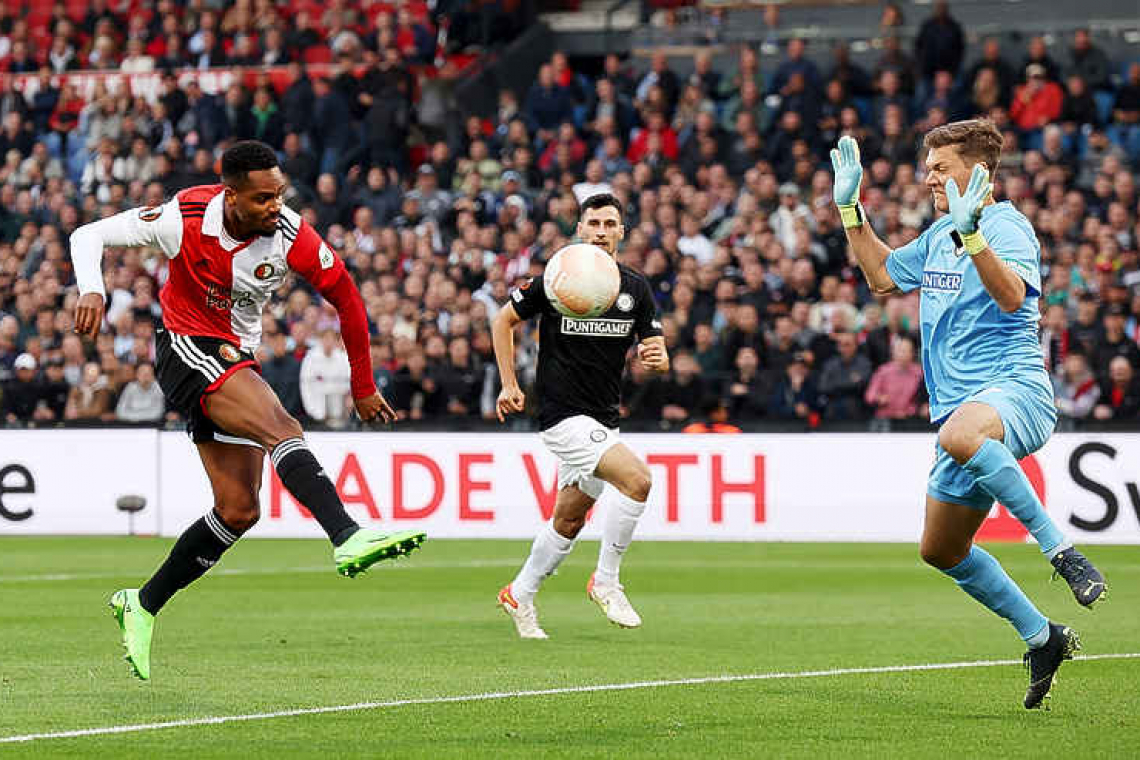 ROTTERDAM--Feyenoord Rotterdam convincingly recovered in the Europa League from last week’s defeat in the opening game against Lazio (4-2) in Rome. The Rotterdammers were much too strong for Sturm Graz, the current number three from Austria, in De Kuip stadium on Thursday evening. Halfway through the game it was already 4-0 for the home side, which scored two additional goals in the second half.
Feyenoord started the game extremely effectively and opened the score after 10 minutes thanks to a clever shot by Alireza Jahanbakhsh. David Hancko doubled the score after a chop from Oussama Idrissi, and after another nice attack Danilo made it 3-0. With his second goal of the evening Jahanbakhsh provided his team with a comfortable 4-0 lead at halftime.
The Rotterdammers continued after the break where they left off in the first half. Substitute Santiago Gimenez headed in the fifth and with a bit of luck Idrissi’s powerful shot put the final score of 6-0 on the boards.
Lazio lost 5-1 to Danish-side FC Midtjylland, so that all four teams in Group F are on three points after two games. Feyenoord lead the table as they have the best goal difference.
With their big win against Sturm Graz, the team of trainer Arne Slot gained confidence for the match against PSV Eindhoven in the Eredivisie next Sunday.
PSV did not play on Thursday. Their Europa League away game against Arsenal was postponed to October 20, due to the death of Queen Elizabeth.

AZ-FC Vaduz 4-1
AZ Alkmaar beat FC Vaduz from Liechtenstein 4-1 in their Conference League action on Thursday. Vaduz is ninth in the Swiss Second Division, but eliminated Turkish-side Konyaspor and Rapid Wien from Austria in Conference League Qualifiers.
Also, against AZ they played a solid game, but AZ was the better side and opened the score as Yusuf Barasi made it 1-0. However, they did not play well enough to decide the game early on.
Vaduz even made it 1-1 with a great shot by Frenchman Anthony Goelzer, but after goalkeeper Benjamin Büchel took down AZ forward Jens Odgaard, the pressure became too great.
A goal by Sam Beukema, after a pass from Milos Kerkez in the 81st minute led them to victory against Vaduz who had been reduced to 10 men after an hour.
Yukinari Sugawara and Dani de Wit brought the final score of 4-1 on the board in the AFAS stadium.