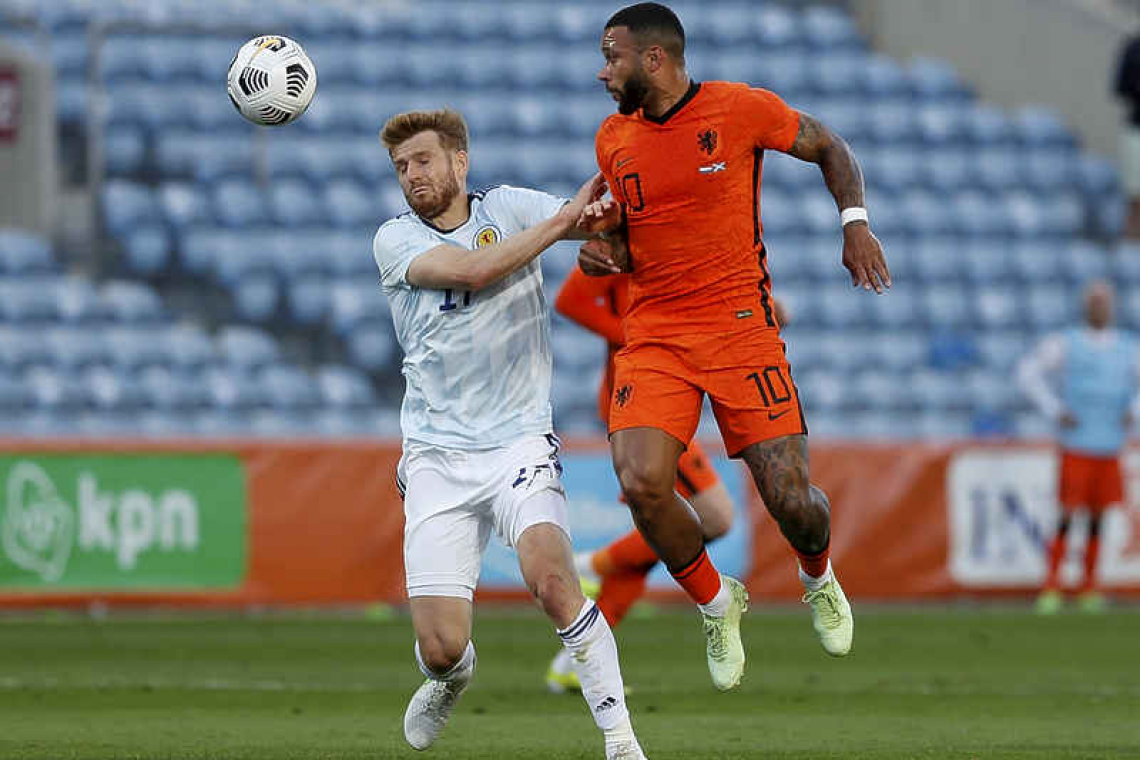 ALMANCIL, Portugal -- Netherlands captain Memphis Depay curled home a free kick with two minutes remaining to grab a 2-2 draw that denied Scotland a surprise win in their friendly at the Estadio Algarve in Portugal on Wednesday.

Depay scored both goals for his team but the result was a major psychological boost for Scotland with both countries preparing for the European Championship.
Scotland, without seven players following a positive COVID-19 case at their training camp in Spain, led after 11 minutes through a rasping shot from Jack Hendry and went 2-1 ahead after 63 minutes when Kevin Nisbet tucked away a cross from Andy Robertson on the left.
The Dutch had equalised six minutes after Scotland's opener when Depay struck home a left-footed volley after being cleverly set up by captain Georginio Wijnaldum’s deft header.
It was a well executed goal that suggested the Dutch would overcome the early setback and turn their dominance of possession into a comfortable win but a gritty Scotland had other ideas.
Hendry opened the scoring after stealing the ball as Depay and Stuart Armstrong scrapped in midfield and cracked it home with precision from just outside the area.
Scotland's second goal was also impressive as Nisbet got a strong connection to direct Robertson’s cross into the net with his first touch after coming on as a substitute.
The Dutch, who took Wijnaldum and fellow key midfielder Frenkie de Jong off after only 30 minutes as a precaution, applied heavy pressure at the end in a bid to stave off defeat and got the equaliser as Depay curled home a free kick that secured a deserved share of the spoils.
A total of seven Scotland players did not travel following a positive coronavirus test for midfielder John Fleck. David Marshall, Grant Hanley, John McGinn, Che Adams, Stephen O'Donnell and Nathan Patterson all stayed behind at Scotland's training base in Spain as a precaution.
Both countries have one more warm-up game before the European Championship. The Dutch return from their training base in Portugal to take on Georgia in Enschede on Sunday when Scotland visit Luxembourg.
The Netherlands play Ukraine in their opening Group C game in Amsterdam on June 13 while the Scots play the Czech Republic at Hampden Park on June 14 in their opening Group D game.