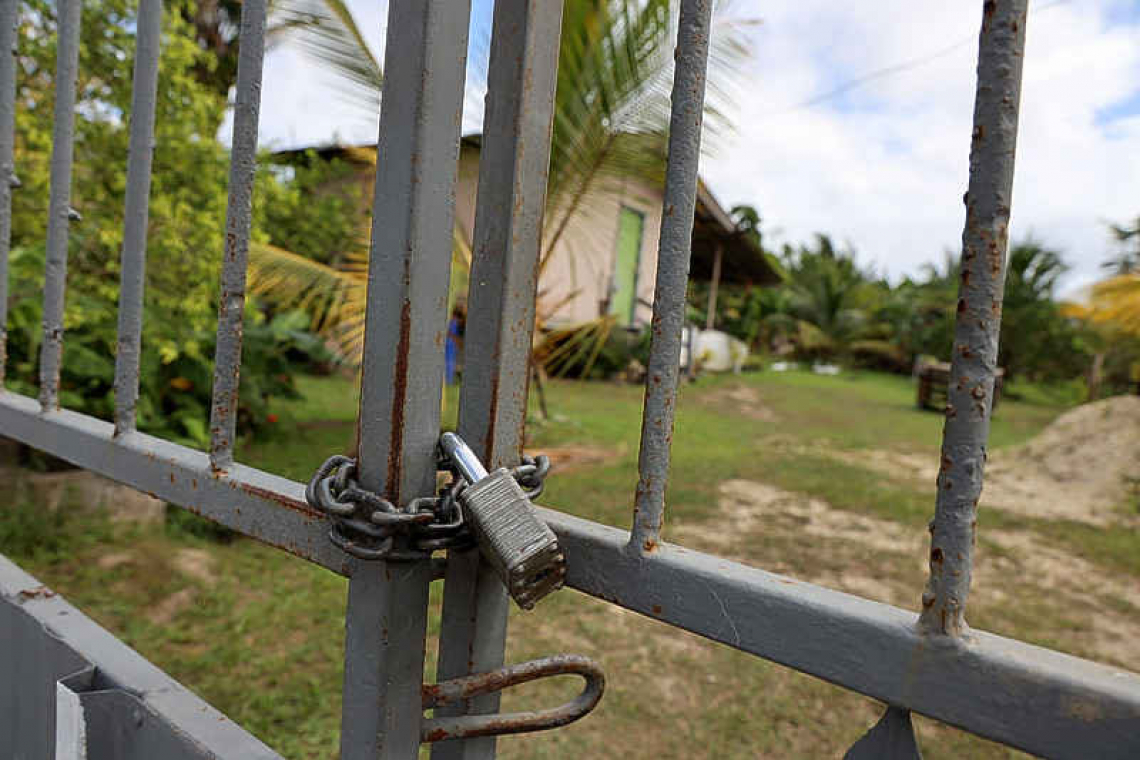 A padlock with a chain locks the front gate of kidnapping victims Narine and Mattie Maraj’s home at Madras Road, St. Helena.

PORT-OF-SPAIN, Trinidad--A man who was part of a couple that was kidnapped from their farm in Piarco and for whom a $2 million ransom was made, has escaped his kidnappers.

However, up to late Sunday night, his wife remained in the custody of the men who took them. Three men are now being questioned by police.

The husband and wife were identified as Narine Maraj (62) and Mattie (54). According to a police report, around 5:30pm on Saturday, Maraj and his wife left their home at Madras Road, St. Helena to go to 3B’s Drive, Piarco, to check on their property and animals in a silver Ford Focus.

Around 6:35pm one of their daughters received a phone call from her father’s cell phone where a strange male voice stated: “We have your people, and we are demanding $2 million for them.”

The daughter tried to contact her father’s phone again, but the attempt was futile. A report was made to the Piarco police station and officers responded by visiting the 3B’s Drive area, but neither the victims nor their vehicle were at the location.

Police said that they acted on information they had received and conducted an exercise in Oropune Gardens in search of the kidnapped couple. The operation involved members of the Anti-Kidnapping Unit, the Northern Division ERP Units, the Northern Division Task Force, the Arouca CID, the Tunapuna CID and the Air Support Unit. The officers conducted searches at Buildings One and Two in the China Town Area of Oropune Gardens for the victims, but their searches were futile.

However, police reported late Sunday evening that the couple’s vehicle was recovered in Wallerfield. After evading his kidnappers, Maraj managed to flag down a vehicle around 3:00pm on Monday and asked the driver to take him to the nearest police station. He was said to be in good health.

Police confirmed that three suspects were also subsequently arrested in connection with the kidnapping. Relatives are now being told by police not to talk about the latest developments with anyone as the investigation is said to have reached a sensitive stage.

Prior to this latest development and speaking with the Guardian Media, a close female relative said the couple’s four adult children are holding strong and praying for their safety.

The relative said that sometime between 5:00 and 5:30pm, they received a phone call from someone demanding a ransom, but she claimed that no ransom sum was given – contrary to the official police report.

“The person just called and said they wanted a ransom, but no amount and we have not heard anything else again from them,” the relative said. “We really do not know who or why. All we were told was that the car was seen leaving the farm and no one could have seen inside the car as it drove off,” she added.

Maraj is a retired auto mechanic and operated an auto mechanic shop and wrecking service for over 20 years. Since his retirement, he handed over the business to his only son, who is one of four adult children. Maraj’s wife is a housewife. “The couple would usually go to see the few animals they have at Piarco which is not too far from their home at Madras Road. They just have a few chickens, ducks and mostly crops,” the relative said.

Asked if the couple had an argument with anyone, the relative replied: “No. Narine is well known in the area, but he [has – Ed.] no enemies. We do not have any enemies, so we really, really do not know what’s happening.”

The relative said when they went to the farm all they saw was the couple’s slippers and added that nothing else was “seen amiss”. ~ Trinidad and Tobago Guardian ~