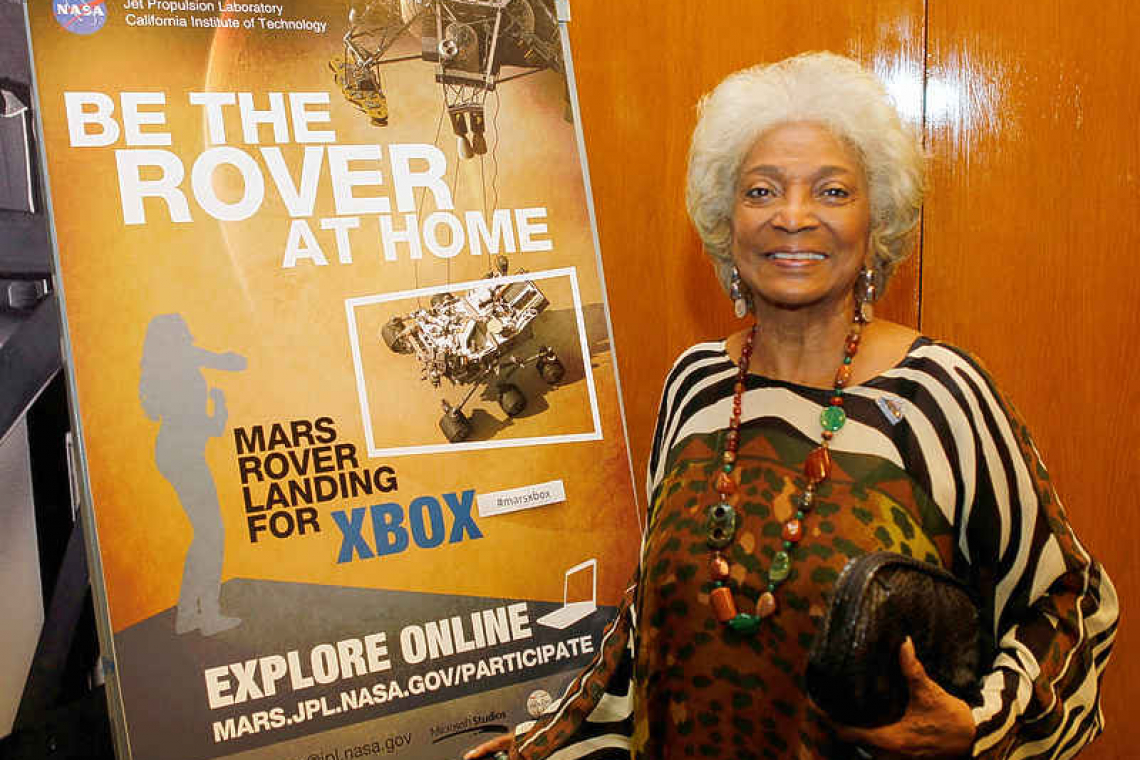 Nichols, whose fans included Martin Luther King Jr. and a young Barack Obama, "succumbed to natural causes and passed away" on Saturday night, her son, Kyle Johnson, wrote on Facebook.
"Her light however, like the ancient galaxies now being seen for the first time, will remain for us and future generations to enjoy, learn from and draw inspiration," Johnson wrote.
The series, which became a pop culture phenomenon, shattered stereotypes common on U.S. television at the time by casting Black and minority actors in high-profile roles on the show. In 1968 she and "Star Trek" star William Shatner broke a cultural barrier when they engaged in U.S. television's first interracial kiss.
She had planned to quit "Star Trek" after one season, but King, the 1960s civil rights leader, convinced her to stay because it was so revolutionary to have a Black woman playing an important senior crew member at a time when Black people were fighting for equality in American society.
Nichols also helped break colour barriers at NASA, whose leaders were "Star Trek" fans. After she criticized the space agency for failing to pick qualified women and minorities as astronauts, it hired Nichols in the 1970s to help in recruiting. Her efforts helped attract, among others, the first woman U.S. astronaut, Sally Ride; the first Black woman astronaut, Mae Jemison; and the first Black NASA chief, Charlie Bolden.
Nichols' portrayal of the competent, level-headed Uhura also helped inspire future Black actors, including Oscar winner Whoopi Goldberg. Nichols recalled Goldberg telling her of watching "Star Trek" as a 9-year-old, seeing her playing Uhura, and yelling out to her mother: "Come quick! There's a Black lady on television and she ain't no maid!'"
The original "Star Trek" series, tracking the adventures of the crew of the starship USS Enterprise in the 23rd century, ran for only three seasons on the NBC network from 1966 to 1969. But it became hugely popular in syndication in the 1970s, inspiring first an animated series that reunited the cast from 1973 to 1975 and then a succession of feature films and shows. Nichols appeared in six "Star Trek" films ending with "Star Trek VI: The Undiscovered Country" in 1991.
Uhura deftly handled the starship Enterprise's communications with allied spaceships and alien races while interacting with Captain James T. Kirk (Shatner), Vulcan first officer Mr. Spock (Leonard Nimoy) and the starship's helmsman, Sulu (George Takei). Takei wrote on Twitter that he and Nichols "lived long and prospered together," describing her as trailblazing and incomparable. "(My) heart is heavy, my eyes shining like the stars you now rest among," Takei added.
Nichols' best-known scene featured the first scripted interracial kiss on U.S. television, although it was not a romantic one. In an episode called "Plato's Stepchildren," Uhura and Kirk were compelled telekinetically to smooch by aliens toying with the feeble humans. In real life, Nichols disliked Shatner, who she considered arrogant.
She felt differently about "Star Trek" creator Gene Roddenberry, who cast her after she had acted in a previous show he produced. Nichols had a romance with him in the 1960s and sang a song called "Gene" at his 1991 funeral.