Water rationing in Statia to last until end of 2020 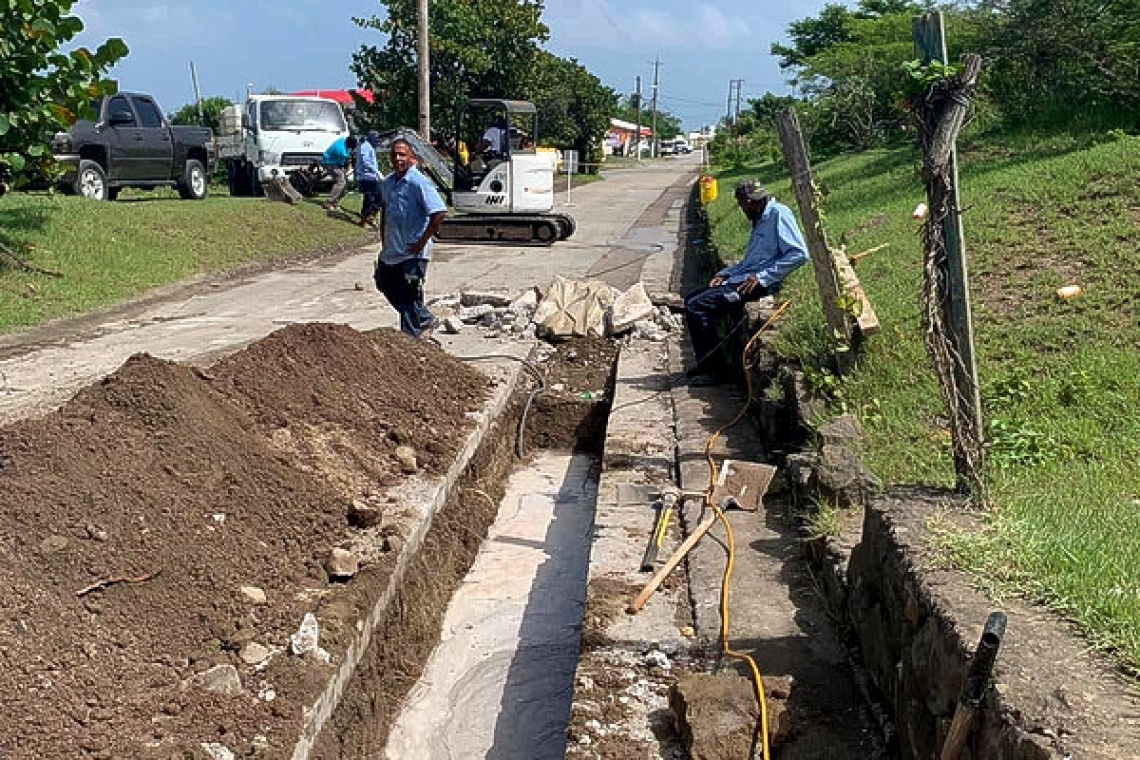 STUCO linemen carrying out repairs to a leaking pipe on Korthalsweg. (File photo)

THE HAGUE--The drinking water woes in St. Eustatius that involve regular rationing are expected to last until the end of this year, according to Dutch Minister of Infrastructure and Water Management Cora van Nieuwenhuizen Wijbenga.

St. Eustatius Utility Company STUCO is working hard on a structural solution for the problem and is executing three projects, the minister stated in response to written questions of Member of the Second Chamber of the Dutch Parliament Nevin Özütok of the green left party GroenLinks earlier this month.

The first project entails an expansion of potable water production from

375 to 625 cubic metres (m3) per day. The second project involves replacing and increasing the capacity of the drinking water transport pipelines with a subsidy from the Ministry of Infrastructure and Water Management IenW.

Under the third project the drinking water storage capacity will be expanded to cope with increased demand at certain times of day. The minister explained that the materials for replacing the transport pipeline were already on the island.

The first two projects should be ready late 2020, after which there will be sufficient drinking water available and water rationing will no longer be necessary. However, until these two projects are completed, residents should take into account that there will be periods of rationing.

The expansion of the drinking water storage capacity should be ready in 2021. Based on word from the IenW Ministry, STUCO will be supported by drinking water specialist Vitens Evidens International and engineering, design and project management consultancy company Royal HaskoningDHV.

The minister said she was aware of media reports that Statia residents, during periods of rationing, had running water in blocks of three hours, from 5:00 to 8:00am and from 5:00 to 8:00pm. She agreed with Member of Parliament (MP) Özütok that everyone in the Caribbean Netherlands, just as in the Netherlands, should have reliable access to drinking water.

Van Nieuwenhuizen explained that the IenW Ministry had decided some years ago to make funding available to solve the regular water shortage issue in St. Eustatius in a structural manner. A drinking water plant, a water transport pipeline and a storage tank were built. With a subsidy from the European Union (EU) a drinking water network was constructed which has been operational since 2014.

The cost of potable water is high, too high for some residents. The IenW Ministry structurally subsidises drinking water so everyone can have a reliable and affordable supply of it. However, the demand for water and the number of connections on the water network have increased steadily, by some 20 per cent in the past year.

The drinking water production could not keep up, and at times there is more demand than the system can handle. Aside from that, problems have evolved with the water transport pipes, which leak in certain places.

“The ad-hoc leakages are repaired, but in combination with insufficient production capacity this leads to periods of rationing. This is done in order to provide everyone with water on a daily basis. Naturally, this is an undesirable situation,” stated the minister.

Last week Government Commissioner Marnix van Rij asked the people not to use pipeline water to fill their cisterns, because after that the water can’t be used as drinking water anymore. The water in the cisterns can be used for other purposes, such as hygiene.

The minister agreed with MP Özütok that access to reliable drinking water was of great importance, especially in light of preventing and combating COVID-19 infection. She said an inventory of local public health authorities showed that schools, day-care centres, afterschool care facilities, the hospital and the home for the elderly did have sufficient water for extra hygiene to prevent and combat COVID-19 infection.

There is also sufficient water in St. Eustatius to fill up the cisterns. Prostar/GTI is designated as the emergency producer of water. The public entity St. Eustatius can buy water there and distribute it using water trucks.