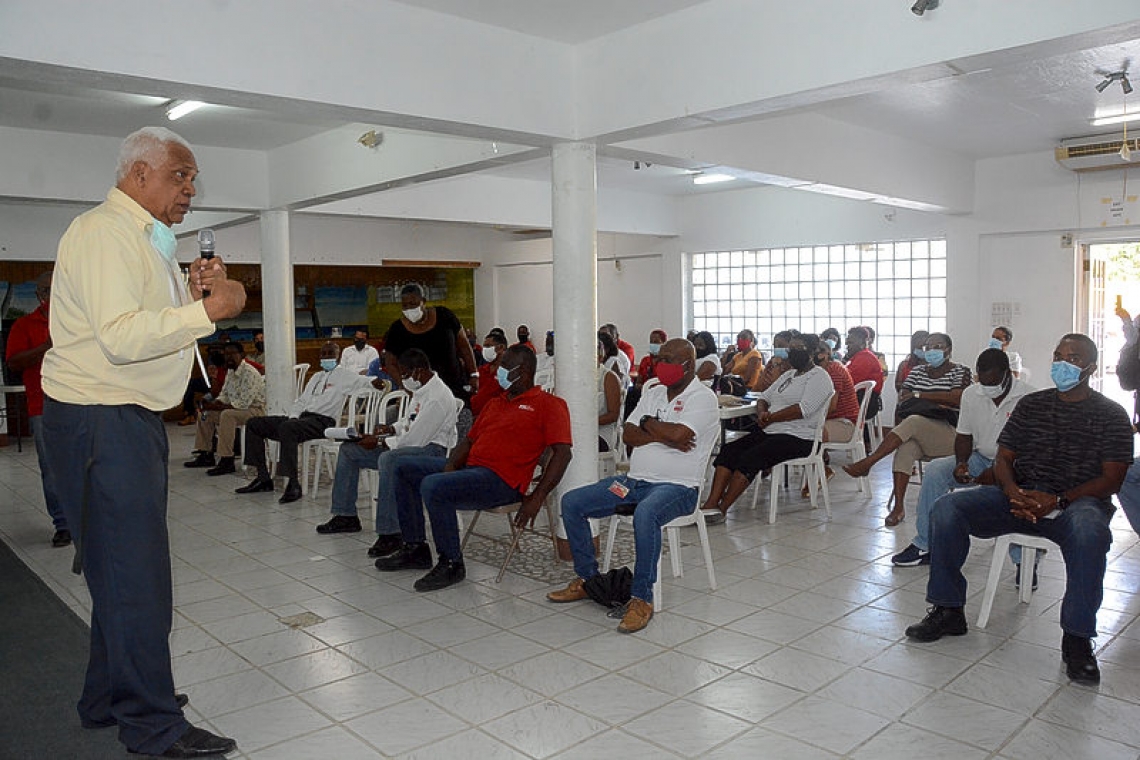 Members came out in large numbers to hear from their union leaders. (John Halley photo)

PHILIPSBURG--A resounding no echoed as members of the St. Maarten Communication Union (SMCU) indicated their disagreement with the cost-cutting measures proposed by management of TelEm Group.

SMCU leaders and members gathered on Tuesday, June 2, at the WIFOL building to discuss the letter that was received by the union from management on Monday, June 1.

In that letter, TelEm Group announced that the company will be implementing a 12.5 per cent cut in salaries for all staff starting July 1.

President of SMCU Ludson Evers reviewed in detail the contents of the letter. Many members expressed their disappointment in the measures proposed.

Members were allowed time to voice their questions, concerns and opinions. Once their voices were heard and the union was made aware of the direction in which its members wished to move forward, Evers presented three motions for members take a vote on.

The first motion was that the union will not accept the proposed cost-cutting measures from management. This motion held a unanimous agreement from all members.

The second motion was to request from the prime minister and Board of Directors of TelEm Group a forensic audit to be administered by the Government Accountant Bureau SOAB for the company. This again was met with an agreement from members.

The union submitted a letter to management of SMTOC [St. Maarten Telecommunication Operating Company – Ed.] on Tuesday afternoon. In the letter the union stated, “The SMCU considers your letter dated June 1, 2020 with the subject: ‘cost-cutting measures’, to be very disrespectful and threatening towards the employees of the St. Maarten Telecommunication Operating Company. In other words, your letter can be labelled as an ‘indecent proposal’ to the employees.”

The union stated its disagreement with the cost-cutting measures that were proposed by management pointing out that this would have a direct negative financial impact on employees.

In addition to this, the union has also requested from management a list of documents and information, prior to any formal discussions or meeting. These documents include the amount of consultants and companies working for, or with SMTOC and the divisions where questioned, as well as the total financial cost and the reasoning for the use of these consultants and other companies.

The union requested a list of all government departments and companies that have outstanding bills older than three months; any and all companies and individuals receiving free services from SMTOC; the monthly and yearly cost of SMTOC caterers and building/grounds-maintenance contracts; and an indication as to how many legal firms SMTOC has on retainer, and what the monthly cost is to the SMTOC.

Management is requested to provide the total travel expenses of employees, management and the supervisory board for the past five years. Management are to provide the cost and projected revenues for all investments made for the past five years, this includes the purchase of CableTV, FTTH [Fiber-to-the-Home], IPTV [Internet Protocol Television], Sitcoms Dominicana and the billing systems.

The unions also requested SMTOC’s structure and formation plan for 2012 and 2020 in order to compare the amount of employees in the company for both years. Management are requested to provide the business plan(s) for the past five years.

In closing the letter, the union said it would be awaiting a prompt response from management of all the aforementioned requests in order to peruse the documents prior to a meeting.

Representatives of other unions came out to the meeting in support of the SMCU. Reginald “Bakari” Arrindell of the Windward Islands Civil Servants’ Union/Private Sector Union (WICSU/PSU), Rogerrel Mauricia of the NAPB (Police union St. Maarten) and Theophilus Thompson of the Windward Islands Federation of Labour (WIFOL) all shared remarks to the crowd. Each person shared their solidarity on behalf of their respective union for the SMCU and encouraged all persons there to continue to fight for their rights.