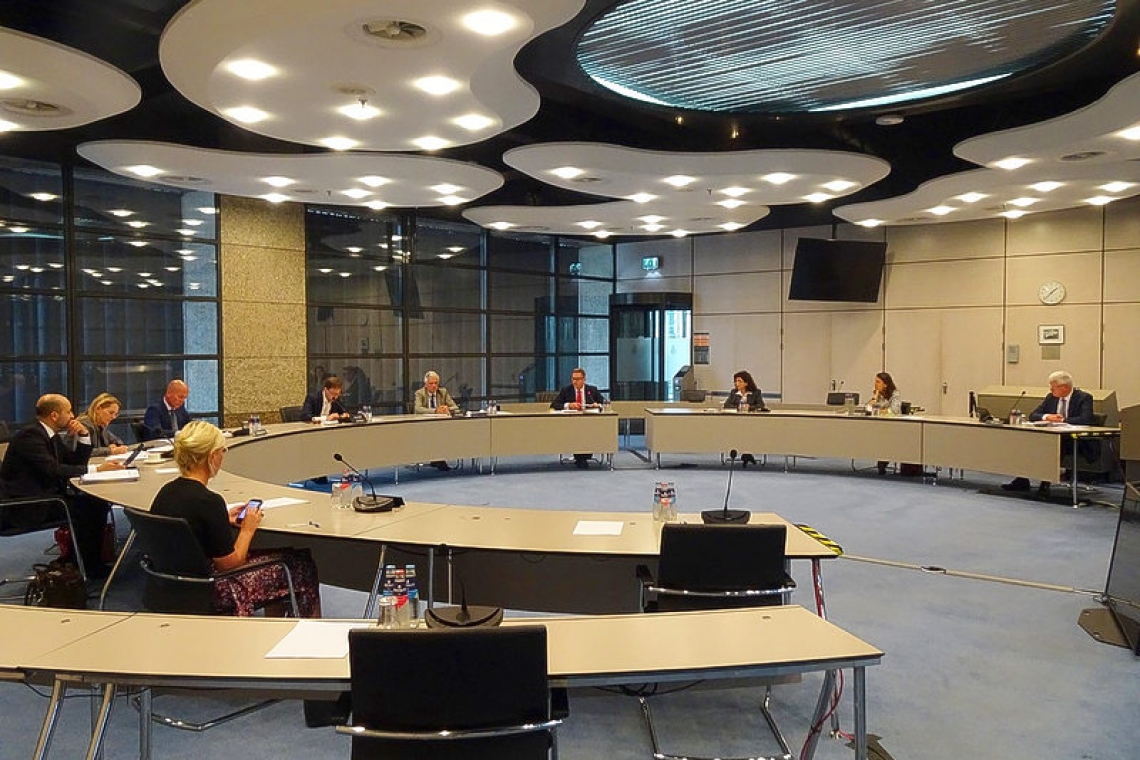 The Second Chamber’s Permanent Committee for Kingdom Relations during a debate with State Secretary of Home Affairs and Kingdom Relations Raymond Knops on Wednesday, asked about the 12.5 per cent across-the-board salary cut. (Suzanne Koelega photo)

THE HAGUE--The Second Chamber of the Dutch Parliament has no problem with the Dutch government setting firm conditions for the provision of financial help for Aruba, Curaçao and St. Maarten, but it does have an issue with essential workers and those with lower salaries having to take a 12.5 per cent salary cut, especially when top civil servants and directors are spared.

During a debate with State Secretary of Home Affairs and Kingdom Relations Raymond Knops on Wednesday, several parties wanted to know if it was possible to forego the so-called “cheese slicer method” of cutting 12.5 per cent across the board for all persons working for (semi) government, government-subsidised institutions and government-owned companies in the three Dutch Caribbean countries.

Member of Parliament (MP) Attje Kuiken of the Labour Party PvdA said it hurt her to see that persons with vital occupations working for government, such as police officers, healthcare personnel, teachers and garbage collectors – of whom a lot has been asked during the COVID-19 crisis – have to take a 12.5 per cent salary cut. “Can we be allies for those that should really be spared?”

“Cost-cutting measures and structural reform are needed, but we need to exempt vital personnel and the vulnerable. Let the broadest shoulders carry the majority of the burden,” said MP Nevin Özütok of the green left party GroenLinks. She said that reforms were necessary. “We all agree on that.”

MP Antje Diertens of the Democratic Party D66 questioned whether the requirement to reduce the total wage sum by 12.5 per cent of (semi) government personnel was proportional. She asked for “tolerance and righteousness” of the Dutch government. “Be a bit nice to each other.”

MP Chris van Dam of the Christian Democratic Party CDA said he had been approached by persons who were very concerned about the effects of the Dutch conditions on the countries. “But I also have people tell me that the Netherlands should keep insisting because these reform measures should have been executed a long time ago. I do not envy any government on the islands, but I do support the state secretary in this resolute policy, in the sincere conviction that it is best for the countries and that they will emerge stronger.”

MPs Ronald van Raak of the Socialist Party (SP) and André Bosman of the liberal democratic VVD party were highly critical of reports they received that top civil servants and directors of government-owned companies/institutions in Curaçao do not have to take an immediate pay-cut, but will have to later on.

Bosman said it was important that the reforms, which have been shelved for years, were finally executed, and that cost was cut, but he did wonder why the exorbitantly high salaries at government-owned companies in Curaçao were not cut back.

“Why are those not tackled instead of the garbage man or the teacher? It cannot be that the low-income earners are hard-hit and that government-company directors who earn up to a million guilders per year are getting a deferment of one to two years, and maybe even five,” said Bosman.

“We all know that if we give money without conditions, the money will end up in the wrong pockets. I am all for it that we assist, but it needs to end up in the right place, where the people need it most,” said Van Raak. He asked the state secretary whether his information was correct that the garbage collector pays the bill of the crisis. “I will be very upset as a socialist if that is the case.”

Knops confirmed the reports that top-earning civil servants and directors of government-owned companies in Curaçao are getting an extension on the proposed salary cut of one to two years. He emphasised that it was up to the Curaçao government to decide how and where to cut, and it was not the Dutch government that told the islands to implement a 12.5 per cent salary reduction.

“The total wage sum has to go down by 12.5 per cent. The countries can give content to that in their own way, they can differentiate. The salary cut is their choice,” said Knops, who explained that there were also other ways of bringing down the wage sum, for example, by making pension cuts and reducing overtime and allowances.

Knops explained that the reform measures were necessary to give the countries perspective for the future. “The reforms are necessary to improve the public finances, to tackle the exorbitant salaries. The differences in income are too big. It is intolerable that people are earning very low salaries and live in poverty, while those earning the big money in government are living in wealth, at the expense of public funds.”

The state secretary said he was very aware that The Hague was demanding offers. “We are asking for leadership, taking hard decisions that are in the best interest of the people, doing the right thing. Further delay is no longer possible. There is too much lopsided growth, too much income inequality and too little result.”

Several MPs enquired about continued emergency humanitarian assistance that was being provided with Dutch funding on the islands. The Netherlands at first, allocated 16.5 million euros for food parcels for all six islands, of which 16 million euros was for the three countries.

“That source cannot run dry,” said Van Dam. Özütok urged the state secretary to continue the funding for the food parcels to keep people from going hungry. “Earlier, the state secretary said that humanitarian assistance was unconditional and that it was not dependent on negotiations for liquidity support. Is that still the case?” asked Attje Kuiken.

Knops confirmed that humanitarian assistance was unconditional, and that the Netherlands would continue this support, which is coordinated by the Netherlands Red Cross. He said currently some 18,000 food parcels were distributed weekly: 5,000 in Aruba, 3,200 in St. Maarten and 10,000 in Curaçao. The demand for food parcels has been increasing steadily during the crisis.