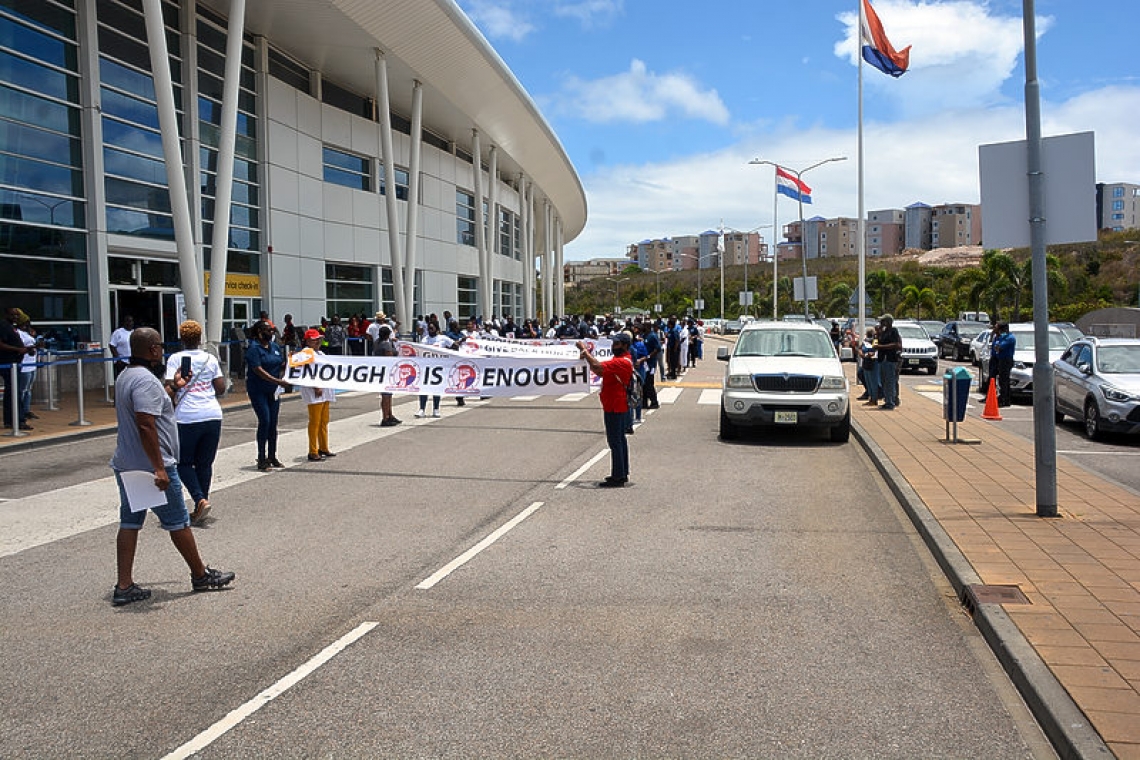 Wednesday’s protest action in front of the airport.

AIRPORT-- Multiple failed attempts at concluding negotiations between airport operating company PJIAE and trade union ABVO in recent weeks led to further frustration of airport employees, who amplified protest measures on Wednesday, July 1, by not only marching with signs and chants, but also effectively shutting down the airport to flights.

The protest action, which was organised by employees and not by ABVO itself, prompted the ABVO union leaders to join in solidarity, and kickstart more negotiations with management and a government mediator requested by management, that otherwise would have started on Friday.

After hours of talks between the parties Wednesday, it was agreed that on Friday management would present a new proposal concerning the workers’ demands about back pay due starting from 2017 – their main grievance – as well as other allowances and benefits such as bonuses, vacation pay, incremental salary increases, and cost of living adjustments (COLAs).

Management does not deny that the back pay is long overdue, and had been promised, but says that it is crucial to preserve money to secure salaries and the future of the company, given the unforeseen crisis caused by the COVID-19 pandemic and the predictable rough months that lie ahead. The company expects to be running on a cash deficit for a significant amount of time.

The employees say that further protest actions will depend on the outcome of the Friday meeting. If the results are not clear, they plan to march to the Parliament building, and if the results are deemed not good enough, most supported the idea of more strikes.

In the meantime, there is no planned protest today, Thursday, and all employees are expected to work.

The strike caused the diversion of an incoming Air France cargo plane, and grounded a Jetair passenger flight that would have come in from Curaçao – passengers getting notice of this from the pilot after boarding the plane. A stranded would-be traveller stuck at Princess Juliana International Airport (PJIA) in St. Maarten had been looking forward to seeing his family in Curaçao after four months apart, but said that he understood the employees’ predicament.

According to international aviation regulations, the planes could not come in due to lack of availability of the airport fire department employees and operations personnel. While some Air Traffic Control (ATC) employees also came to show support and hear results of the trade union/management talks, which affect them in the same way as the other employees, the ATC Tower remained open, which allowed for emergency medical flights if needed. ATC employees are represented by another union, Windward Islands Civil Servants Union (WICSU).

Members of the Windward Island Chamber of Labour Unions (WICLU) had scheduled an Emancipation Day Manifestation, but joined their counterparts at the airport after hearing about the strike – bringing with them banners reading “Stop colonization” and “Enough is enough”. The employees who planned the action brought their own placards with different phrases. “Equal rights and justice” and “Who got to go? Mingo!” were amongst the chants being shouted.

July 1 was the first day the airport would have been officially open to receiving flights from Europe and Canada. The same would have been true for the United States (US), but a last-minute decision had been made to postpone all commercial flights to and from the US for the next two weeks.

While ABVO represents the workers, employees at Wednesday’s protest made it clear that they do not want to compromise, and want ABVO to take a strong and definitive stance in Friday’s meeting and see to it that the result does not become the scheduling of yet another meeting. “We have been too passive and too understanding for too long,” one employee lamented to ABVO President Sharlon Cathalina after he made the announcement.

The employees do not want partial payback, but 100 per cent of it, and now. It had been promised for March. They also want full, not partial, vacation allowance. They pointed out that for most, it would be used for regular expenses and is not considered a luxury. However, some said that it would be acceptable if it were deferred, not cancelled.

The hard stance, they say, is because money was made available, they were promised the payback, their rights according to the collective labour agreement (CLA) are being trampled, and it has already been three years.

Member of Parliament Grisha Heyliger-Marten was present, and on the side of the protesters.

Cathalina told The Daily Herald that the union had been negotiating for the longest while, and that while he understands that money needs to be saved, the money made available should have at least ensured partial payback, which could have given some form of motivation to the employees who are tired of waiting.

“We understand the situation of management, but we also understand what the employees have been going through for the longest while,” he said.

Management initially wanted the new proposal to be presented next week, but after consulting the employees, ABVO demanded it be on Friday. If it’s “decent for our people, we will accept it,” Cathalina said.

Chief Executive Officer Brian Mingo and Chief Financial Officer Leo van der Meiden said to this newspaper that they do understand the employees’ points and appreciate the frustration, but the controversial move to delay the overdue payback even longer is because of the unforeseen crisis caused by COVID-19 and the responsible thing to do in the current situation would be to protect job security and base salaries, as well as the company, for the upcoming period.

While they acknowledge the CLA terms cited by the employees, they say the CLA had a clause that takes hardship into consideration, and that this is not “business as usual” by any means. The airport, having zero revenue, is using the money that should have been used for back pay to continue paying salaries every month, said Mingo. Paying staff is more than half of the operating cost, Van der Meiden pointed out.

While the employees lamented that the numbers had to be crunched once more before a new proposal could be presented, Mingo also pointed out the curveball of the last-minute change to being able to accept American travellers. “They say 15 days, but I can bet you the delay will be more than two months,” he said. “This is about how we can get through this crisis as smoothly as possible.”

“We’re going to phase through a hard period, and we have to preserve that cash to keep the airport running and to secure the jobs of the employees. We don’t want to gamble, but to do what’s in the best interest of the employees, and also the country,” said Van der Meiden.

The two do not expect to be able to see 100 per cent passenger return even by late 2021 due to the current crisis.

Mingo also pointed out that parliamentarians getting involved is not helping negotiations, as they are providing input that is not correct, and adding to the uproar.