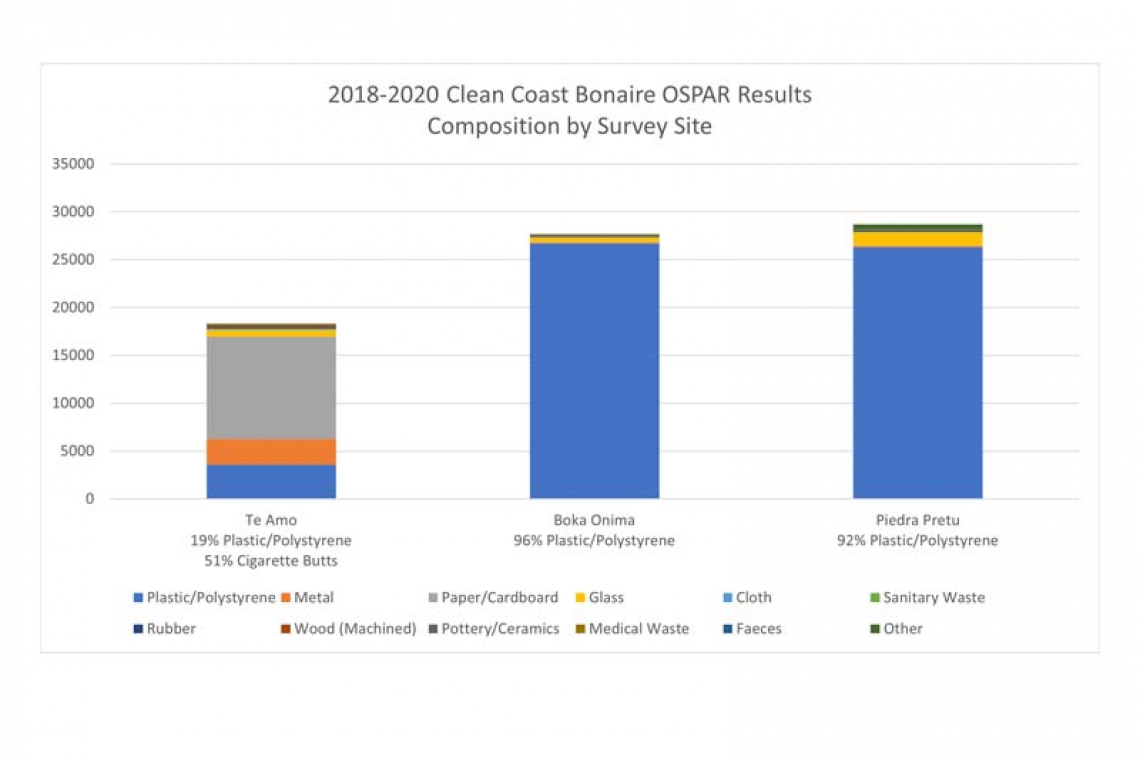 BONAIRE--Although the marine litter crisis is a global threat, small islands experience a disproportional burden of the problem. An estimated eight million tons of litter enter the ocean every year. When it washes ashore in coastal communities, it has negative impacts on economies, marine life and even human health. Last September the Caribbean Netherlands marked two milestones in the global fight against marine litter. Clean Coast Bonaire celebrated its second anniversary of collecting OSPAR marine litter data, as Saba launched its own OSPAR marine litter monitoring programme. The Convention for the Protection of the Marine Environment of the North-East Atlantic is also known as the OSPAR Convention.

“Bonaire and Saba’s achievements are significant because solutions to the problem of marine litter require long-term, cooperative measures. Although Bonaire and Saba are 800 kilometres apart, collecting marine litter data in a standardised way makes it possible to analyse the data and identify problematic items in our region,” stated a release.

“Long-term, consistently collected data will allow scientists and policymakers to see trends in quantities, composition and significance over time. This partnership is a positive step towards harmonising marine litter data collection in the wider Caribbean region.”

In the two years since its inception, Clean Coast Bonaire says its volunteer citizen scientists have collected over 75,580 items of marine litter from three locations around the island. The two sites on the eastern, windward coastline receive a significant amount of litter that drifts in from offshore. Over 90 per cent of the items found there are composed of plastic or polystyrene.

Less litter is found at the one site on the western, leeward shore. However, what is collected there has been left behind by beachgoers, including 9,254 cigarette butts.

The OSPAR Marine Litter Monitoring Protocol is used because it has proven to be an effective long-term and region-wide method in Europe for monitoring marine litter on beaches. The programme is recognised by global policy makers and survey data provided by OSPAR was influential in recent marine litter reduction policies enacted in the EU. In the past few years, regional marine litter experts have discussed using the OSPAR methodology to harmonise data collection in the Caribbean.

“I am so impressed by the dedication of our volunteers. Their work is taking our knowledge to a whole new level,” said Clean Coast Bonaire Coordinator Carolyn Caporusso.

“They’re proving that we can use the OSPAR monitoring protocol in a harmonised way in the Caribbean. This will lead to a better understanding of the amounts, types, sources and potential impacts of marine litter in our region, thereby enabling the development of targeted measures to reduce plastic and other types of marine litter pollution.”

According to the release, volunteer citizen scientists of Bonaire and Saba are certainly embodying the phrase “Think globally, act locally”. Their contribution to their communities has the immediate result of cleaner beaches locally.

“However, they are also making impactful steps towards filling a regional knowledge gap and supporting a comprehensive strategy to combat marine litter. It is commendable that by giving the valued gift of time, these volunteers are also contributing to the regional and global fight to keep our coasts clean.”