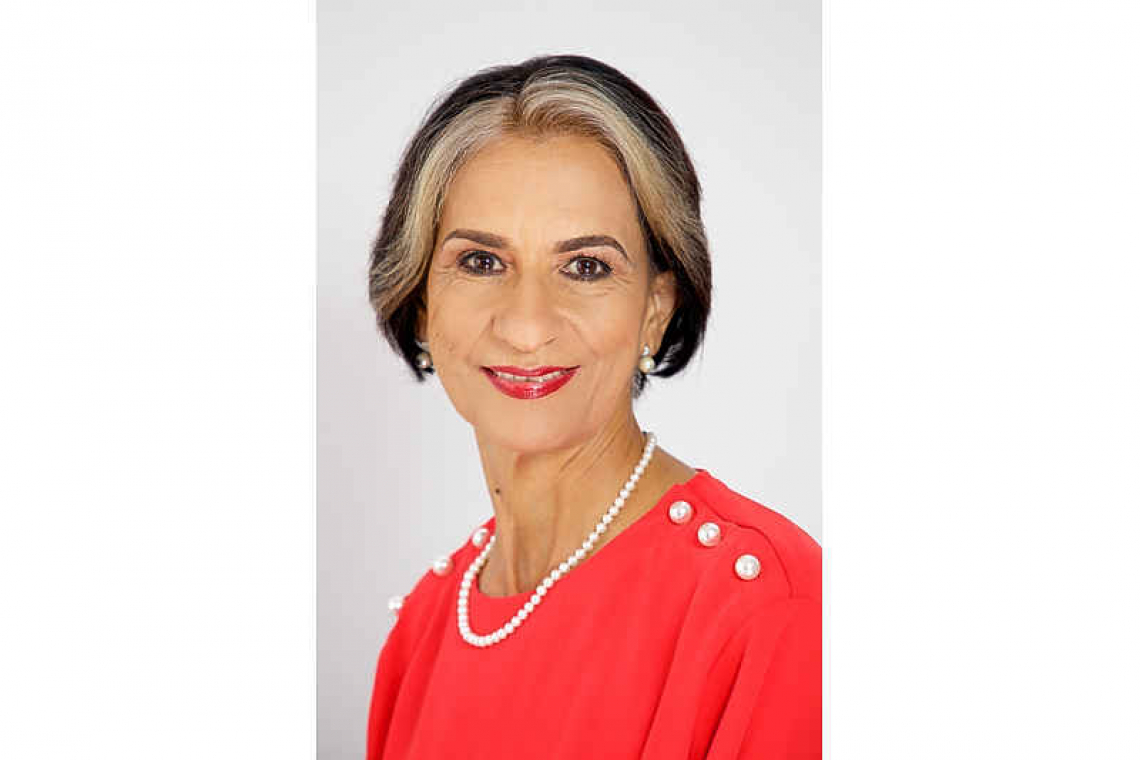 PHILIPSBURG--United Democrats (UD) Member of Parliament (MP) Sarah Wescot-Williams says the Parliamentary meeting to propose the establishment of a Permanent Committee for Constitutional Affairs and Decolonisation for the Parliament of St Maarten was a “smokescreen” to “push through” a motion that followed at the eleventh hour last Thursday.

She also said that it is “criminal” to tie the hands of government at this crucial stage of negotiations with the Dutch government when the liquidity assistance to help residents is at stake. She also questioned Parliament entertaining the Choharis Law Group based in Washington, DC (see related story), noting that “not a word” was said about this in the meeting and no questions were answered about Parliament’s presidium entertaining engaging the law firm.

“It is ironic that the government does not have the legislative capacity to prepare the necessary laws to make adjustments to civil servants’ legal position, so that these decisions can be challenged if necessary, but they can engage legal counsel for the decolonisation drive,” Wescot-Williams said. “It should also be noted that no motion of Parliament can set aside procedures such as open solicitation for bids to carry out work on behalf of Parliament; formal decision-making by Parliament, or financial procedures,” she added.

“The coalition majority in Parliament does not have a blanket approval to do as they please and then expect government to make payments, sanction contracts and/or agreements. I urge the government to carefully consider how far they want to go along with these dubious tactics by the coalition for the sake of wanting to appease individuals in the coalition.”

She noted that with all the pressing matters facing the country, such as the financial position of government, the state of government agencies such Social and Health Insurances SZV, healthcare and the fragile economy, Parliament spent much of the past week discussing decolonisation. “The Presidium of Parliament decided to quickly rush a Central Committee meeting and the following day a public meeting of Parliament to ‘establish a permanent decolonisation committee’ of Parliament,” Wescot-Williams said, adding that it was only after objections from her and others about the need for such a committee at this time, was it “grudgingly decided” to name the committee: Committee for Constitutional Affairs and Decolonisation (CCAD).

“While I have been very critical of this so-called decolonisation drive, because of what I read behind these attempts, I voted for the establishment of the committee, because I saw it as the right setting to continue the discussion regarding the constitutional future of this country and to ensure that no fast balls are passed. Fast balls such as wanting St. Maarten back on the list of Non-Self-Governing Territories (NSGTs),” she said.

She said “a good discussion” was held last Wednesday on the establishment of the committee, during which she was able to highlight that St. Maarten has the right to self-determination and doesn’t have to seek or ask for it to be given; the constitutional future of this country is a decision of the people, not of a selected few and she considers going back on the list of NSGTs is a decision to be made by the populace. She also highlighted that the people must know all of the relevant facts.

She said the proponents of the CCAD were very adamant about the openness of the committee, the involvement of the people and the input of all MPs, which is why she supported the committee.

“I too want us to get to the bottom of this discussion, so that this carrot that is held in front of our people by some of our elected representatives that the UN charter can force the Netherlands to ‘take care of us’ without any conditions, without any push back, without any deliberations, can be seen for what it is, a carrot. The statement about the Netherlands having to take care of us unconditionally is incomplete and inaccurate,” Wescot-Williams said.

“I have to conclude, however, that the committee proposal was, but a smokescreen to push through a motion that followed at the last moment on Thursday. A motion that attempts to put the Parliament on the seat of government and steer the government. A motion that attempts to circumvent the constitutional division of powers between the Parliament and the government, with total disregard for financial rules, parliamentary procedures and our democratic system. It is criminal to tie the hands of government at this crucial stage of negotiations with the Dutch government when the liquidity assistance to help our people is at stake,” she said.

“Not to mention the prime minister’s answers to Parliament which did not reach us, until pressed for them on the day of the meeting. Answers that only seek to appease coalition members. Interestingly from these answers, statements by [Dutch–Ed.] MP André Bosman have now become our frame of reference.”

She said now that the matter of constitutional affairs has taken centre stage, it is government’s duty to explain to the St. Maarten public what their intentions are with respect to self-government/autonomy/independence; decolonisation route to the United Nations; what of these and in what order are these constitutional items priorities for government and funding for these initiatives.