Retaining wall collapses on road, none hurt in accident 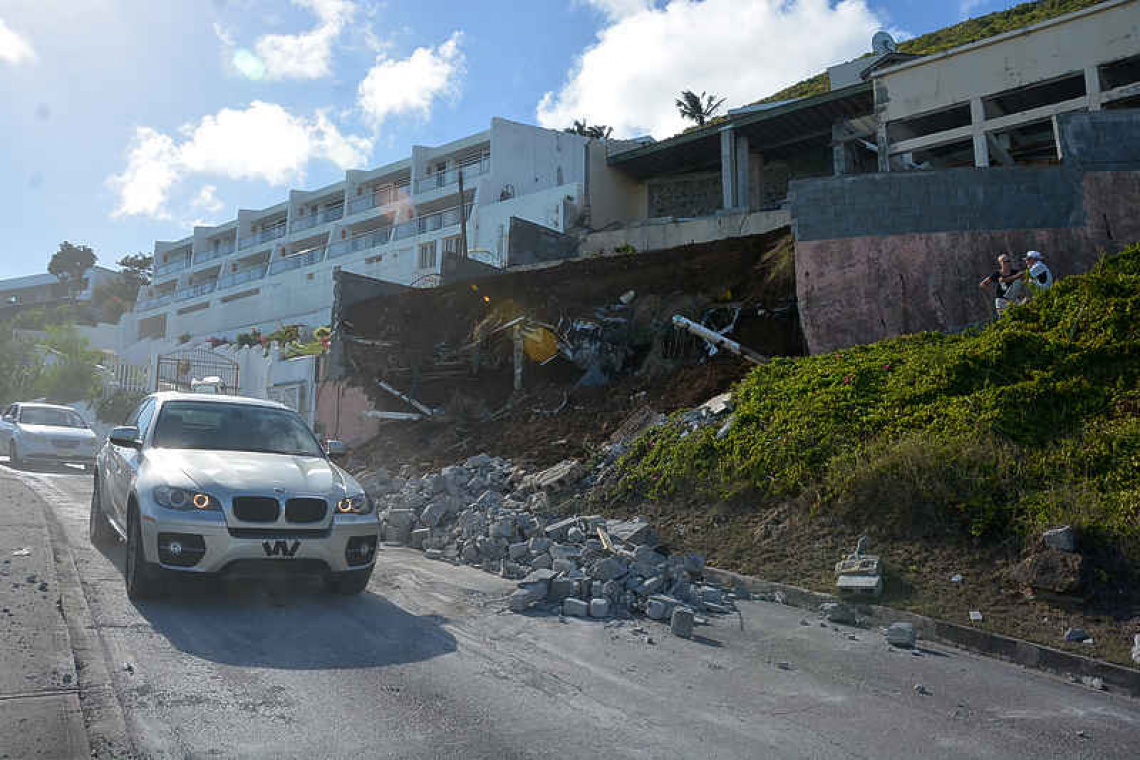 The retaining wall’s collapse initially blocked Little Bay Road with debris and earth, causing traffic jams to worsen in the immediate area. This John Halley photo was taken after heavy machinery cleared one lane, which allowed vehicles to slowly make their way through the accident site.

GREAT BAY--A private property’s retaining wall collapsed on Little Bay Road around 2:45pm Thursday, littering the area with debris and restricting the flow of traffic for several hours. No one was hurt in the accident despite copious amounts of heavy blocks and earth falling on the busy road.

It was fortunate that no one was in the area when the pink wall caved and crumbled onto the street below. Some filmed the aftermath on their mobile phones, and videos circulated widely on social media just moments after the accident.

Motorists suddenly had to find alternative routes to their destinations, as concrete blocks, stones, dirt, and other materials were strewn across the entire width of Little Bay Road, making it impossible for vehicles to pass. Shortly afterwards, police officers were seen near Learning Unlimited (LU) Preparatory School restricting persons from driving towards the scene.

Only after heavy machinery cleared one lane of rubble could cars slowly make their way through the accident site. Despite this partial alleviation, the late afternoon rush hour was more severe than usual. For several hours, lines of cars were backed up on Bush Road going both ways, finally clearing around 8:00pm.

“It just failed,” said property owner Steven Johnson about the wall’s abrupt collapse, adding that it had broken away at its base. A mini-excavator was doing landscaping work on the property at the time of the accident.

“We got lucky nobody got hurt,” Johnson said. “That is, if you could possibly get lucky with something like this.”

Civil servants from the Ministry of Public Housing, Spatial Planning, Environment and Infrastructure VROMI visited the area after the collapse and spoke with Johnson.

When contacted by The Daily Herald on Thursday afternoon, VROMI Minister Egbert Doran had no comment about why the retaining wall had failed, but said he was waiting on a report from VROMI’s Department of Inspection.

Doran also said officials from the ministry’s Department of Infrastructure Management were in discussions with Johnson about cleaning up the debris. Johnson told this newspaper that he had arranged for heavy machinery to work through Thursday night to take away the rubble.

The retaining wall was between 40 and 50 years old, and was part of the property Johnson bought from businessman Ralph Ledee in 2004 or 2005. It was constructed with eight-inch concrete blocks, but without steel to reinforce the structure. Shortly after he made the purchase, Johnson extended the retaining wall several feet higher and backfilled the resulting space. But unlike the original wall, he made sure steel was part of the extended construction.

According to Joris Vanden Eynde and Yuri Daal of local engineering firm Independent Consulting Engineers (ICE), the greatest stress to a retaining wall is at its base, and this pressure grows exponentially with any additional height.

Homeowners should periodically check retaining walls for signs of failure, they said. One such sign is horizontal cracks forming in the ground directly behind the wall, which signals that the structure is shifting or bulging.

Several of the area’s residents said Johnson’s retaining wall looked had unsteady for some time. Vanden Eynde and Daal agreed with this assessment, saying they were “surprised it took so long for that wall to collapse.”

“It is unfortunate that it happened, and lucky nobody got hurt,” they said, warning that they have seen more retaining walls across the country that appeared unstable.

“This should be an eye-opener for many to have their retaining walls checked by professionals,” said Vanden Eynde.

As for Johnson’s plans after the costly clean-up, he said he will demolish the remaining portions and rebuild the entire retaining wall from scratch. 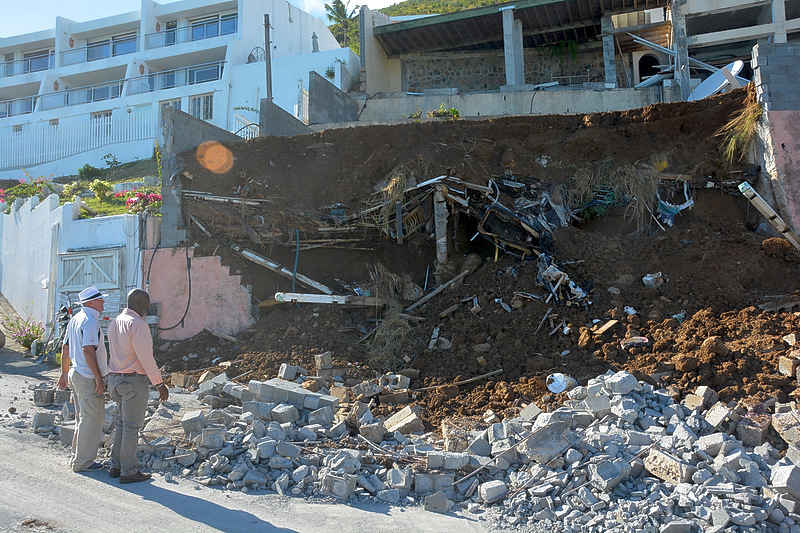