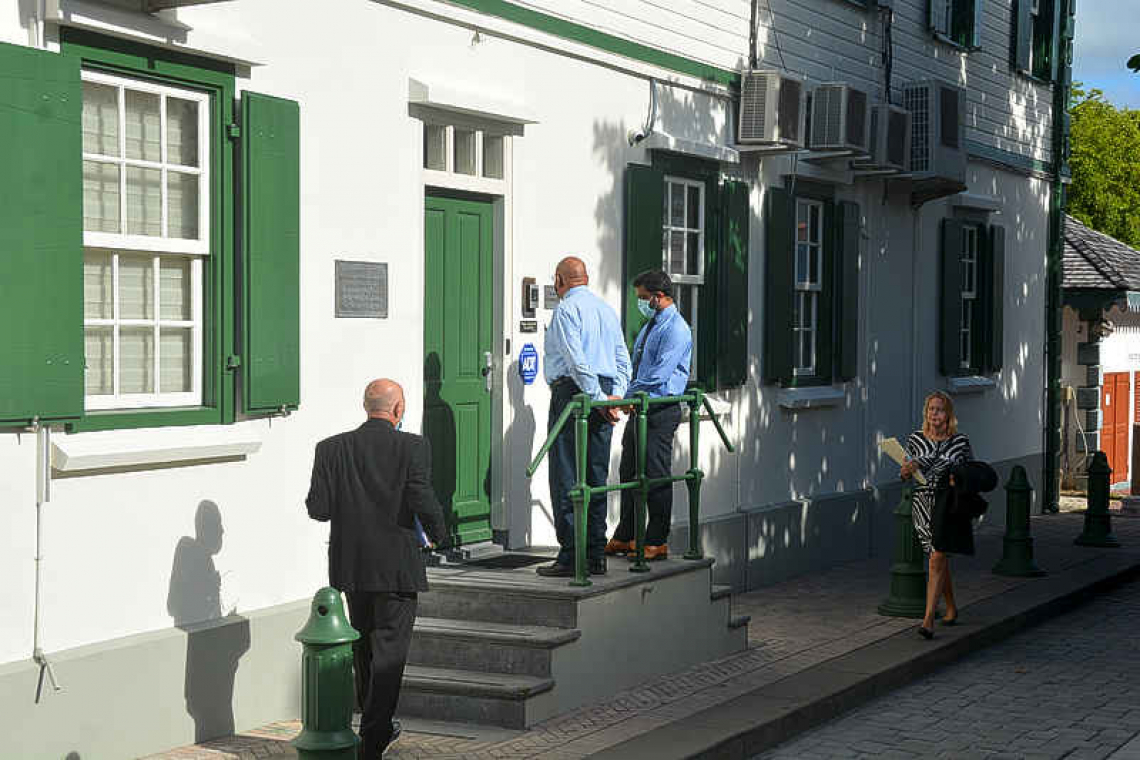 From left: plaintiff Steven Johnson, representatives of Balaclava NV, the developer of Planet Hollywood St. Maarten Beach Resort, and attorney on behalf of the Ministry of Public Housing, Spatial Planning, Environment and Infrastructure VROMI, Caroline van Hees, gathering at the courthouse for the – postponed – injunction hearing on Friday, October 9.

GREAT BAY--Steven Johnson, who lives in the vicinity of the location where Planet Hollywood St. Maarten Beach Resort will be built, has withdrawn a request with the Administrative Court for the nullification of the permit for the construction of the fourteen- to sixteen-storey all-inclusive resort with 452 rooms, a casino and a beach club with facilities at Great Bay, which was issued by Minister of Public Housing, Spatial Planning, Environment and Infrastructure VROMI Egbert Doran on July 10, 2020.

The resident of Little Bay Road withdrew the injunction during Wednesday’s hearing in the Administrative Court during which policy advisor A. Kolthof announced on behalf of the VROMI minister that no later than Friday, November 6, a date will be set for public review and an objection procedure, and that no building activities by developer Balaclava NV will be permitted up to six weeks after a decision in the objection procedure has been taken.

During yesterday’s hearing, Balaclava’s representatives stated that the developer is not doing any construction work at the site at this moment and that it also does not have any intention to perform building activities in the near future.

Johnson told the court that he was willing to wait and put his legal proceedings on hold for the time being. “I don’t mind doing that as long as I know what is going to happen, and they [Balaclava and VROMI – Ed.] do not sneak behind my back,” he told the judge.

The injunction followed a previous case which was heard by the court in February. In these summary proceedings a permit for the construction of the resort, which was granted by a ministerial decree of April 9, 2019, was annulled by the court, as it did not meet the legal requirements.

In the new injunction filed against VROMI Minister Doran and VROMI director of permits Charlona Pompier in September, Johnson called on the court to declare the new permit granted to Balaclava null and void, as he claimed that the permit was issued in direct contravention of existing administrative laws.

This illegal act represents a “clear and present” danger to the local community and endangers his life and property, the plaintiff stated in his petition to the court. He called for the court’s intervention to protect him and all others who reside in the immediate surrounding area of the to-be-constructed resort.

According to the St. Maarten resident for more than 20 years, the new permit should be shredded to pieces, because if the developer had wished to proceed he should have presented a completely new permit application, including the required “true” information, specifications, plans and “accurate” engineering data to support the new application, all of which was previously missing from the original application.

This would, by law, also require a new public review and objection procedure to preserve the rights of nearby residents to protect themselves and their properties, but this opportunity was never offered to the public at large before the new permit was issued in July, Johnson claimed.

The proposed construction of the resort will be more than 70 metres (200 feet) high, making it the tallest coastal building ever constructed in St. Maarten, which will tower over all surrounding residential properties, including the Lt. Governor’s house. The land upon which the project is proposed is only some 40 metres from Great Bay. According to plaintiff, the construction and operation of a hotel of such “massive” size would cause noise and traffic in a densely populated area, constituting “an unacceptable nuisance by any standard.”