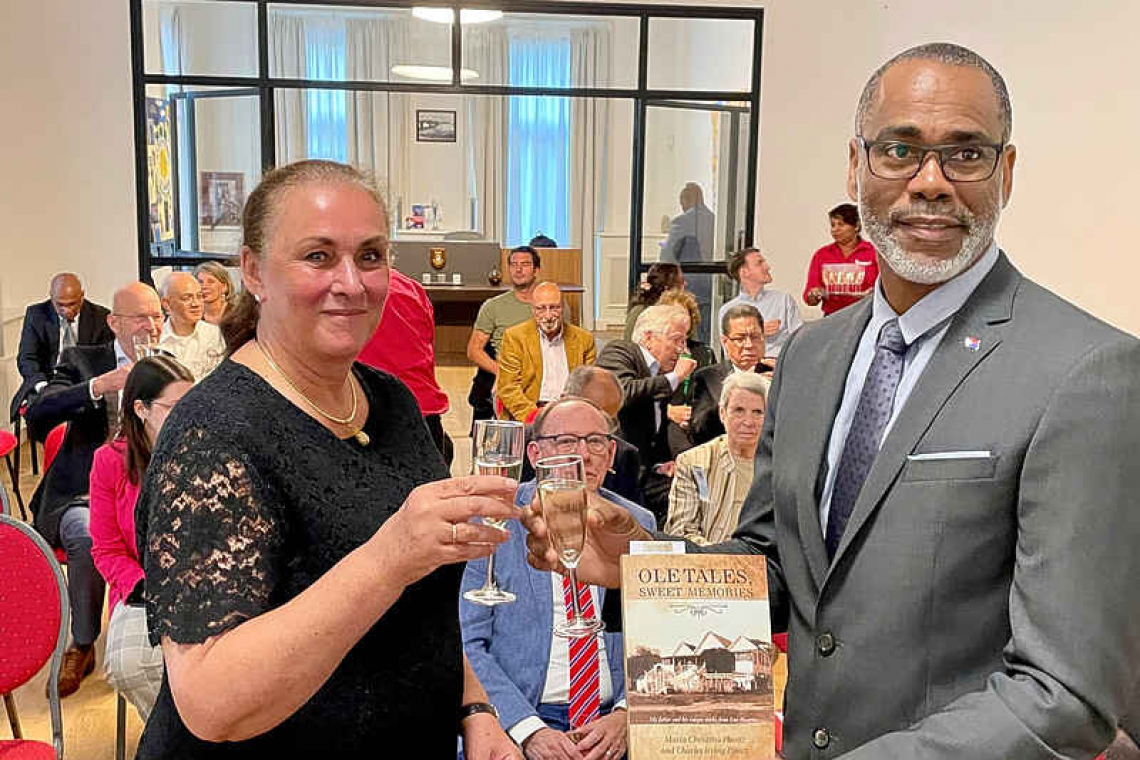 THE HAGUE--The new book of Maria Plantz and her father Charles Irving Plantz Ole Tales, Sweet Memories was launched at the Cabinet of the St. Maarten Minister Plenipotentiary in The Hague on Wednesday evening.

St. Maarten Minister Plenipotentiary Rene Violenus welcomed the invited guests and spoke of the importance of preserving cultural heritage, St. Maarten’s identity. “It is important to preserve stories of how daily life was in those days, stories of what it meant to be a St. Maartener back then. They are lessons of our forebearers, their traditions and how they lived. Cultural history needs to be shared and spread so others can learn about it,” he said.

Maria Plantz expressed thanks for holding the book launch “in the house where it belongs: the St. Maarten House.” She said that with the publication of Ole Tales, Sweet Memories, St. Maarten has recovered a “treasure of cultural heritage.”

“When we agreed as siblings that my father’s stories had to be published, I decided to write a short biography about my father, Charles Irving Plantz, describing his deep St. Maarten roots and ancestry. Between 1948 and 1952 my father wrote at least 18 St. Maarten stories. It was a surprise to all of us. We had no idea that he had written these stories, let alone also recorded them for broadcast to the islands by Radio Nederland Wereldomroep,” she said.

Maria Plantz said that thanks to the research conducted by Dr. Jos de Roo for his thesis about the contribution of Radio Nederland Wereldomroep to the literary development of the Dutch Caribbean, Ole Tales, Sweet Memories became a reality, a book in which the 18 remarkable stories were published for the first time.

In her speech, Maria Plantz described her father as a humble man, modest, renowned for his values, standards of integrity and intellectual prowess. “He was very demanding of himself and the people around him, always in pursuit of making things better. The concept of ‘we’ definitely had priority over the concept of ‘me’, where ‘me’ was only justified or even relevant if acting in service of ‘we’.”

Charles Plantz did a lot for the community, through the Kiwanis, as a lawyer for the labour unions and as a member of the board of the Monsignor Verriet Institute in Curaçao. “Without ever expecting anything in return, he had a spirit of generosity which nowadays may be considered old-fashioned but is sincerely missed. In his humility he was very approachable, regardless of his standing in the community, always ready to extend a helping hand and to do the right things right. He was a role model for many,” said Maria Plantz.

Gilbert Wawoe, a former Member of the Council of State of the Kingdom and a former member of management of Shell in Curaçao, knew Charles Plantz well during the latter’s working life in Curaçao.

Wawoe described him as a “quiet man with 100 per cent integrity, trustworthy, gentle and highly professional. He was through and through a good man.” He said that he and Charles Plantz, then the head of the Finance Department, met every year to negotiate the fuel price for the water and electricity plant KAE.

“He would come with then Island Secretary Boelie van Leeuwen, a flamboyant man with strong opinions. But Plantz knew his stuff; knew how to get the best price for the island government,” said Wawoe, who also recounted how he met Charles Plantz for the first time during an information event for students, who were about to go to the Netherlands for studies, an event that Charles Plantz organised and spoke at.

Lynn Kaplanian of the American Book Center said it was through stories that cultural history was passed to next generations. “They are wonderful stories and I’m so proud of you,” she said to Maria Plantz. Kaplanian and Mary Hellmund of The Daily Herald were the editors of Ole Tales, Sweet Memories.

Ole Tales, Sweet Memories is sold through the Boekscout publishing company in the Netherlands, but due to the book’s success, it can now also be obtained via Amazon.com. The book is also for sale at Van Dorp in St. Maarten.