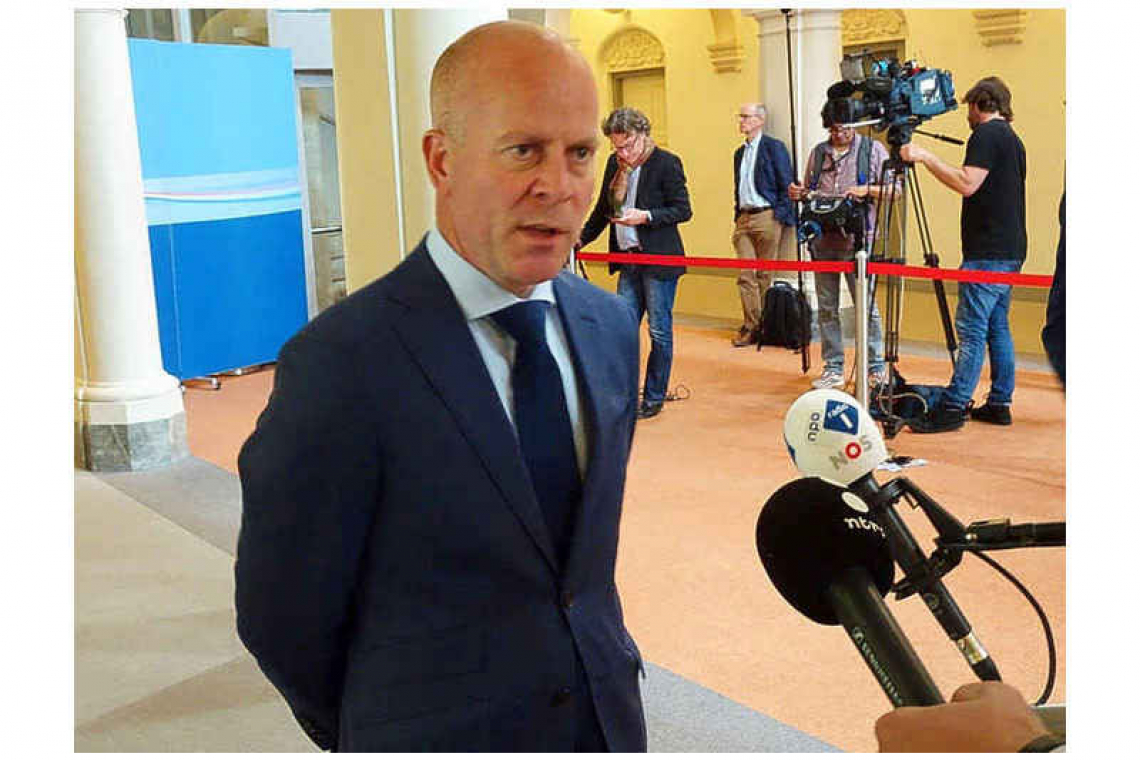 THE HAGUE--St. Maarten will not be receiving some NAf. 39 million in liquidity support until its Parliament clarifies its position on the recently submitted petition to the United Nations (UN) and confirms approval for the Caribbean Entity for Reform and Development COHO, wrote Dutch State Secretary of Home Affairs and Kingdom Relations Raymond Knops to the Dutch Second Chamber of Parliament on Friday.

Knops’ letter followed the Kingdom Council of Ministers meeting on Friday that decided on issuing further liquidity support for Aruba, Curaçao and St. Maarten in the second quarter of 2021, which is tied to reform packages to be implemented by the countries in conjunction with the to-be-established COHO.

St. Maarten Prime Minister Silveria Jacobs told Knops on March 17 that her Council of Ministers had agreed to the implementation agenda, setting the stage for more liquidity support to be given at the end of the month.

However, the recent petition by St. Maarten’s Parliament to the UN derailed these plans. The petition – backed by 12 of 15 MPs, including all who support Jacobs’ cabinet – seeks “investigate violations of a UN mandate right to a full measure of self-government for the St. Maarten people.”

According to Knops’ letter, Parliament’s earlier support for the COHO proposal has been nullified because the petition requests the UN to “terminate the COHO proposal and ensure that no new Dutch entity or person(s) assumes similar powers” and to ensure that “the powers proposed in the COHO legislation and other executive and legislative authority remain exclusively with the elected island governments”.

The draft COHO legislation is also not without internal criticism. In documents leaked this week, the Council of State – the Dutch government’s highest advisory body – called the draft law “unfitting” and said it required changes before being submitted for approval.

“The content of this petition, as well as the language used in it, cannot be reconciled with the previously expressed support for the country package and the establishment of COHO,” said Knops in Friday’s letter. “The COHO law requires consensus on the part of St. Maarten … The petition submitted shows that a majority of St. Maarten MPs, including the coalition parties, are rejecting the COHO law and the associated country package.”

Knops and Jacobs exchanged a series of letters last week, in which she confirmed government’s support for the process.

Knops told Dutch MPs that he even received a letter from St. Maarten’s Parliament Chairperson [Rolando Brison – Ed.] on March 24, which said a majority of St. Maarten parliamentary factions still support the country package and the path to realising it.

However, for Knops, this assurance was not good enough. “The letter does not provide any clarity about how this support relates to the petition submitted, which is also supported by a majority of MPs,” he said. “How can there be support for the country package and the process towards the COHO law, but also support for a petition expressly requesting to stop this exactly process?”

Parliament cannot have its cake and eat it too, Knops seemingly implies.

“The Kingdom Council of Ministers has decided to once again request St. Maarten for clarification regarding the support of Parliament for the country package and the process for the realisation of the COHO law, in relation to the petition submitted and any other upcoming processes within the framework of the adopted motion of November 5, 2020,” wrote Knops.

The Netherlands will not provide liquidity support as long as there is no clarification and explicit political support, said Knops. “A decision on the liquidity support for the second quarter of 2021 can be made as soon as sufficient clarity has arisen about the position of Parliament.”

Without additional cash, it is uncertain how long St. Maarten’s government can continue to fund its operations and provide financial aid through the St. Maarten Stimulus and Relief Plan (SSRP).

Before the Netherlands disbursed some NAf. 61.2 million in liquidity support in late December 2020, St. Maarten’s finances were in dire straits because of the economic fallout of COVID-19. Jacobs told MPs earlier this year that, without the funding, there were concerns about government making payroll at the end of January.

St. Maarten received that round of liquidity support after agreeing to the COHO proposal in mid-December 2020, which only came on the heels of back-and-forth dialogue between authorities in Philipsburg and The Hague.

The Dutch government initially withheld support that time too, being unconvinced about local support for the COHO proposal because several MPs harshly criticised the move on Parliament’s floor in the preceding weeks.