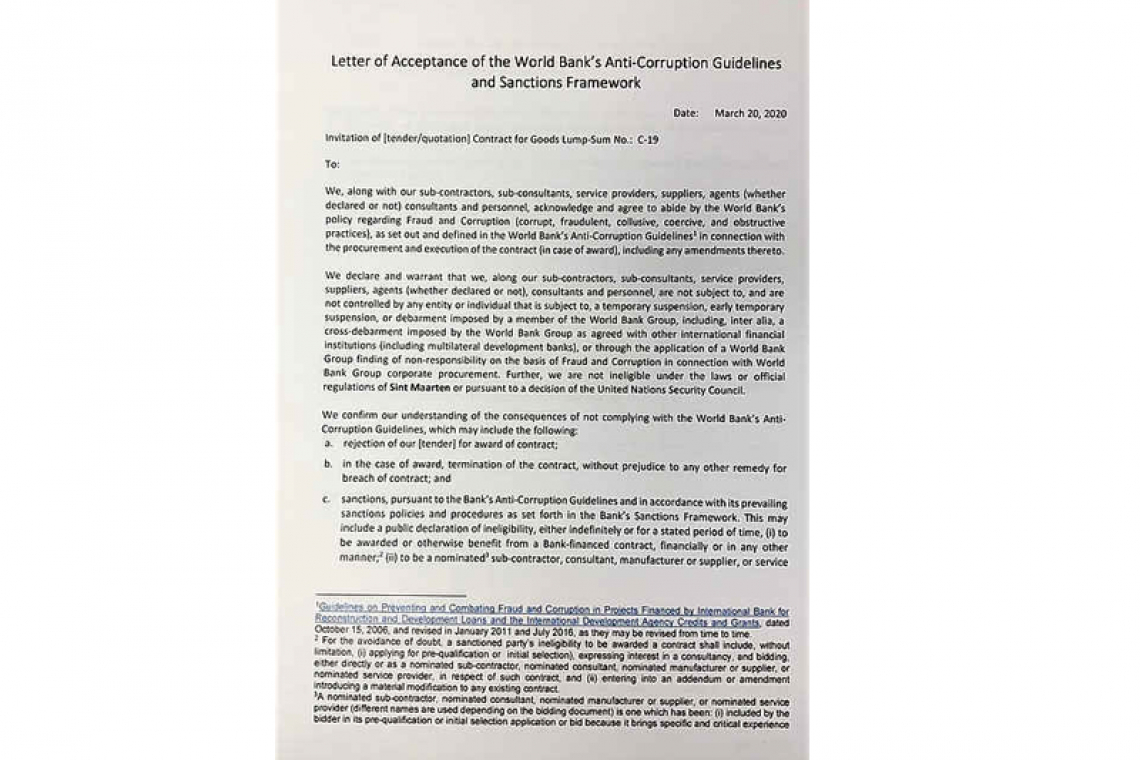 MP Emmanuel refers to the Letter of Acceptance of the World Bank’s Anti-Corruption Guidelines.

PHILIPSBURG--In response to the news that Ballast Nedam has been awarded the contract for the airport reconstruction project, independent Member of Parliament (MP) Christophe Emmanuel questioned how Dutch firms with a criminal history continue to secure contracts on St. Maarten.

In the past he also questioned Ballast Nedam’s role in the roof repair at the airport. “Now we have the same company with shady history of bribing government officials being awarded another major contract on St. Maarten. The measuring stick seems to be very different for St. Maarten when it comes to Dutch companies as compared to local individuals and companies,” the MP said.

Ballast Nedam was investigated in the Netherlands for paying almost 30 million euros in bribes to government officials in Suriname and Saudi Arabia. Fines to the tune of 17.5 million euros were written off as general project cost. Through legal procedures, the case was settled out of court.

Emmanuel said the fact that Ballast Nedam secured the airport contract at a time when the Dutch government and the Schiphol Group – supported by the local government – places significant focus on good corporate governance, is very noteworthy and in contradiction to the World Bank’s anti-corruption guidelines and sanctions framework.

These guidelines were outlined in the tender documents for the airport project as a letter of acceptance by all bidding companies. In part, the guidelines focus on fraud and corruption which the World Bank breaks down as corrupt, fraudulent, collusive, coercive and obstructive practices. Breach of these guidelines could include a public declaration of ineligibility for being awarded or otherwise benefitting from a bank-financed project.

The MP questioned if Ballast Nedam’s history was held to these standards in the tendering process, how could the company be awarded the reconstruction project and made to act as if its questionable history does not exist?

“Everyone wants to see the airport back up and running. But such actions continue to defeat the purpose that [caretaker – Ed.] State Secretary [Raymond] Knops and the local government try to build their arguments on, to gain a foothold at the airport. False purpose is always exposed when the truth comes out. You cannot preach essential corporate actions and good corporate governance but accept a company that settled million-dollar bribery charges,” MP Emmanuel said. “Allow me to use the same premise Knops builds his defending arguments on: In the name of good corporate governance, please provide an explanation how Ballast Nedam was cleared for the bidding process, considering their criminally suspicious past and bribery settlement.”

“Local companies, local people and St. Maarten as a country have been called all sorts of disparaging names for unproven suspicions of wrongdoing. But in the case of these Dutch companies, you simply have to commit to construct sewage, and it is business as usual,” Emmanuel said, referring to Windward Roads which, like Ballast Nedam, was involved in the “Larimar” case, in which politician Theo Heyliger stood trial for accepting bribes from these two companies and two other Dutch companies.

Emmanuel: “Windward Roads, despite its guilty verdict in the Larimar investigation and defrauding the country, is still somehow managing to secure contracts from the government of St. Maarten, with the only penalty being a fine which the company is using to construct a small sewage system.”

The Daily Herald understands that Windward Roads carries out projects to the tune of US $2 million at its own expense. A new sewerage pumping station at Foga with a pressure line to the A.Th. Illidge Road wastewater treatment plant is currently being built. The Prosecutor’s Office stated in a press release that “the sewerage pumping station is one of three major projects through which the people of St. Maarten are directly benefiting from the US $2 million fine levied against the construction company Windward Roads by the Prosecutor’s Office OM SXM.”