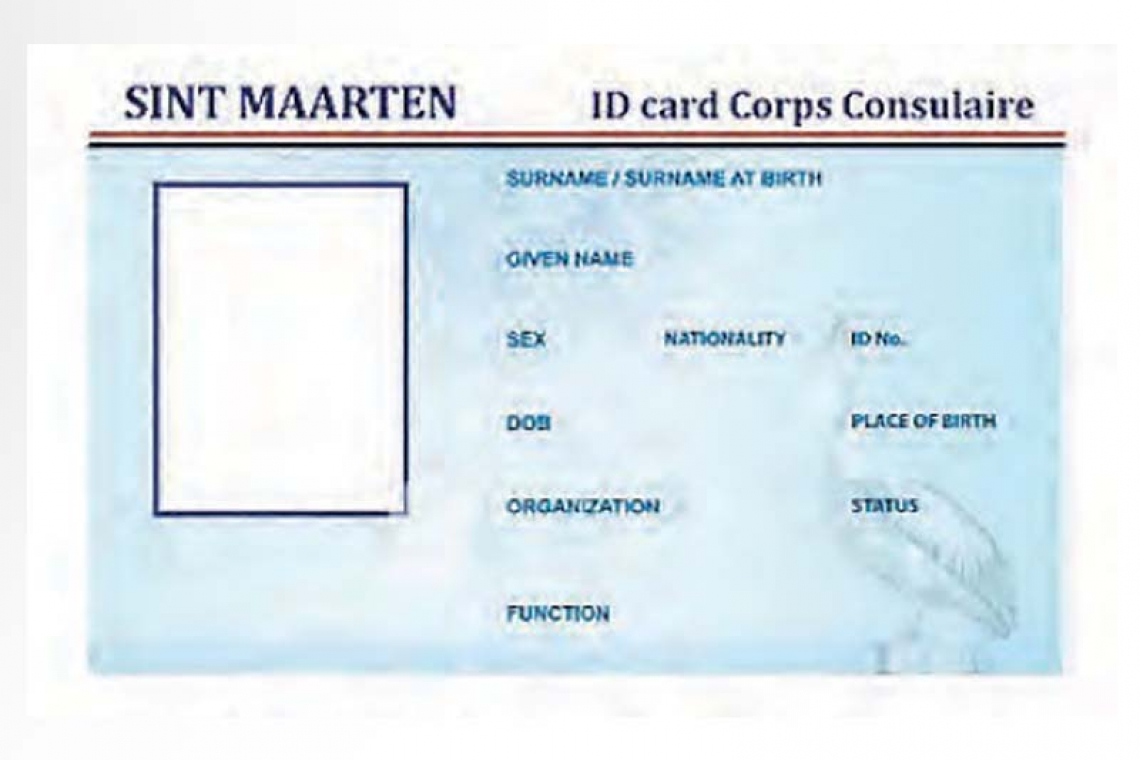 A sample of the ID cards for privileged persons. A green card (not pictured) will be introduced for persons associated with IGOs.

PHILIPSBURG--If an amendment to the national ordinance on identity cards for privileged persons, presented by Prime Minister Silveria Jacobs to Parliament recently, is eventually passed, St. Maarten will be in compliance with international obligations and will be one step closer to being able to agree to host country agreements with organisations such as the World Bank and other United Nations (UN) organisations.

The tabling of the amendment was questioned by some Members of Parliament (MPs) who were concerned about why special ID cards were required.

The amendment tabled during a meeting of the Central Committee of Parliament seeks to amend the national ordinance on identity cards for privileged persons to add ID cards also referred to as “carnets” for “privileged persons” affiliated with inter-governmental organisations (IGOs) such as the World Bank. Jacobs said IGOs were not taken up in the original amendment in 2016 as it was not yet anticipated that St. Maarten would have IGOs wanting to establish themselves in the country.

A diplomat or “privileged” person, based on the amended 2016 ordinance, is a member of a consular post, his/her family and his/her staff. As an official representative of the government of one state in the territory of another, the consul is there to assist and protect the interests of the citizens of the consul’s respective state and to promote cooperation and friendship.

These persons, although not in direct service of a foreign state, work on behalf of a given state to help facilitate mainly citizen-related services. By virtue of their work, consuls and honorary consuls are entitled to a certain level of protection in the execution of their tasks. This right is guaranteed by the Vienna Convention on Consular Relations and is globally applicable.

Three categories of diplomats are recognised in St. Maarten – members of consular posts in St. Maarten, honorary consuls, and consuls in other countries visiting St. Maarten. The ID cards for the system are classed in Status A, B, C, or D and each card has a different colour to further assist in identifying the specific person concerned.

The Red Card is for career consuls in St. Maarten (Status A), vice-consuls (Status B), Dutch nationals or permanent residents employed at the consulate (Status C) or their family members and household help (Status D).

The Blue Card is earmarked for honorary consuls in St. Maarten with either a Dutch nationality or in possession of a valid residence permit (Status C).

Jacobs told MPs while tabling the amendment last week Thursday that the ID cards/carnets will be provided to the accredited staff of the specified IGO via the Department of Foreign Affairs.

“By issuing an identity card that distinguishes itself from a normal identity card, authorities in St. Maarten can immediately identify the bearer of the card, which will now include the accredited staff of IGOs, remembering that the other three cards were already regulated so we are just adding one more.

“These ID cards will correspond with their level of privileges and immunities similar to those provided to members of the diplomatic and or consular corps,” she said.

“St. Maarten therefore has the legal obligation arising from international conventions to grant privileges and immunities to certain persons. These legal obligations already existed prior to 10/10/10, so under the former Netherlands Antilles.

“Immunity is a principle of international law by which members of consular posts or international organisations are not or only limited subject to the jurisdiction of local courts. They cannot or only under certain circumstances be put under arrest or detained. Those persons are, for that reason, called privileged persons,” Jacobs explained.

She further added that under international law and based on the Vienna and UN conventions it is therefore customary for a host country to grant IGOs immunity from the criminal jurisdiction of the receiving state, in this case St. Maarten, to allow them to function independently.

“The majority of staff of IGOs are entitled to functional immunity, which extends to acts performed in the course of their official duties. Conventions do not give diplomats and officials carte blanche for misconduct. Immunities do not place these persons above the law and they are obliged to conduct themselves in accordance with the laws of St. Maarten.

“In the event of misconduct, the sending state, or in this case organisation, has the authority and also the duty to take action; for instance, by recalling the diplomat or official or by waiving his or her immunity. Immunity should not impede the course of justice,” she made clear.

Jacobs outlined to MPs some benefits of IGOs for St. Maarten. She said that in pursuing an active diversification and foreign relations policy, it is advisable to support IGOs by hosting them in St. Maarten.

She also said that hosting IGOs can create opportunities for St. Maarten in the international policy arena. It can also influence policy in the IGOs to St. Maarten’s benefit. Hosting an IGO can also give the country an edge and a level of visibility in the region as a destination with a favourable business climate.

With St. Maarten’s airport acting as a hub for the region and with multiple daily flights, it is also a good location for IGOs to be established. Their presence will further enhance the regional hub function in St. Maarten, as IGOs often operate in various countries and a local office can become a regional office in which the IGO covers other countries. They can also create employment opportunities for St. Maarteners and St. Maarten can benefit from capacity building.

In the same parliamentary meeting, Finance Minister Ardwell Irion also presented an overview of changes to several tax laws in relation to correcting omissions regarding tax exemption for consular buildings, implementing measures to combat double taxation for temporary short-term activities on island, enabling the establishment of pre-clearance in St. Maarten, and enabling the establishment of a World Bank Office here.