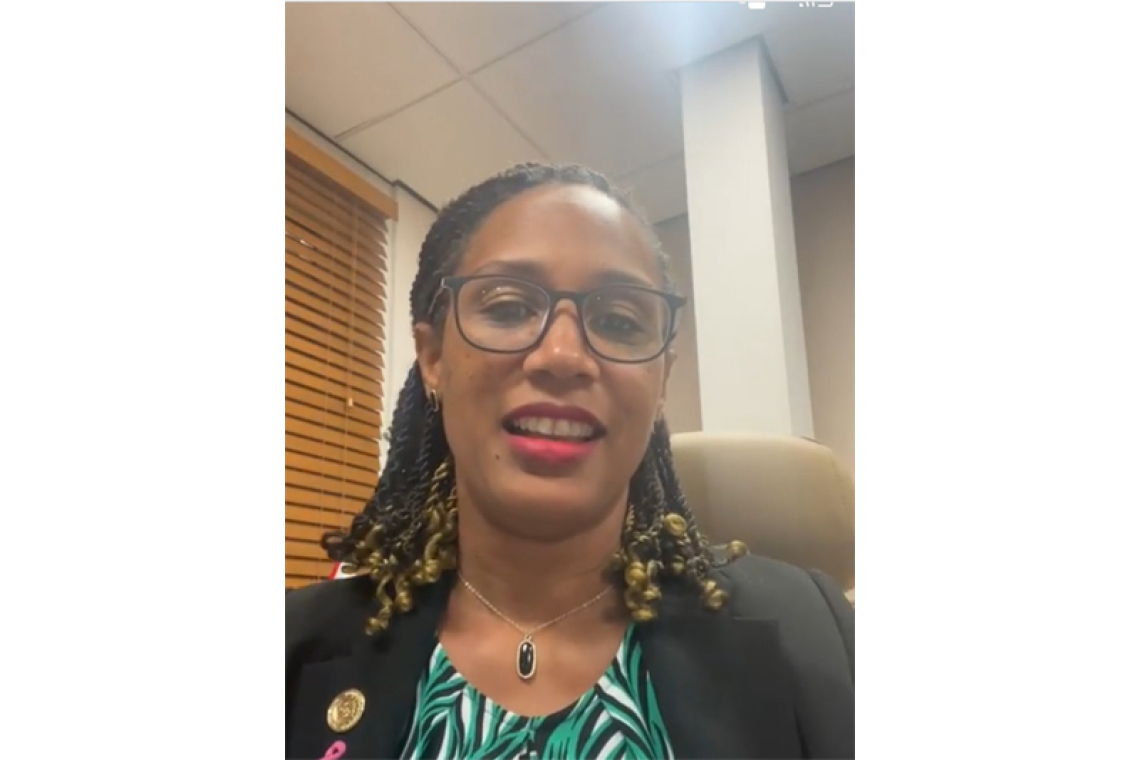 Grisha Heyliger-Marten during her livestream on Thursday.

PHILIPSBURG--The second overall highest vote getter of the United People’s (UP) party and the highest vote getter for the party at the last parliamentary election, Grisha Heyliger-Marten has tendered her resignation from the UP, founded by her husband Theo Heyliger, and will now serve as an independent Member of Parliament (MP).

She announced her resignation in a Facebook livestream, hours after being voted out as President of Parliament by eight MPs from her former National Alliance (NA)-UP coalition and seven votes against.

Indicating that she has been lied to, manipulated, chastised and bullied and suggesting that the party has created a climate where women are to remain submissive, Heyliger-Marten said the UP party is no longer recognisable as the party she had grown to love.

“During the past 30+ months in office I’ve been called emotional; been told, ‘Ah Grisha, that’s politics, deal with it’; been called dumb publicly; experienced being threatened for following the rules of order; been told that when a decision is made ‘without my input’ that I must simply agree; been chastised by those who tried to weaponise my husband’s legal battles against me; been lied to; manipulated and bullied,” she stated.

“All of the above were statements and actions made, for the most part, by men in the inner circle of the UP party. Today, the UP party has perpetuated a climate in which men can speak and act against women in these despicable ways, and women are to remain submissive when spoken to. But not this woman – you got the wrong woman,” she said.

“Today, I stand up not only for myself but for all the women in St. Maarten that have been chastised, demonised by being called ‘an angry black woman’ and simply set aside and muzzled in the political man-made arena. Today, I stand tall and will never bow down or submit to inequality. I stand up against weak men out there that will never understand the true value of a woman and believe that it’s okay to be disrespectful to us,” she added.

Heyliger-Marten said she will not let personal agendas and chauvinistic egos stop her from standing up for the people of St. Maarten, nor will she allow herself to lose sight of who she is just to satisfy the political agenda of a select few.

“This woman you see here today is a woman striving towards doing right by the people of this country, because St. Maarten deserves better. This woman you see here today is a woman who has been raised with the principles of integrity, dignity and most importantly, a woman of faith – a woman who isn’t afraid to stand alone, remain true to herself, and do the best that she can for this country and its people, so that I am able to look in the mirror and be proud of who is looking back at me. I embrace every challenge and every weapon formed against me as a means to learn and grow even stronger and use it as motivation to continue working loyally for the people of St. Maarten,” she said.

She said it was with mixed feelings that she views the party today. “The UP party is no longer recognisable as the party I’ve grown to love, that I supported, helped brand and build. I can’t even begin to explain what the UP party stands for anymore. The green house is in such disarray financially and has been led rudderless to an oblivion, with no vision. It has been broken into splinters and I oftentimes found myself wondering where I could even start with putting it all back to its former glory. With that being said, I would like to hereby tender my resignation from the UP party effective immediately,” she said.

She said during the past 12 years, she has campaigned and helped organise five elections on behalf of the UP party, “from its inception with: ‘Let’s Team UP’ in 2010, to ‘We Ready’ in 2014, ‘All the way UP’ in 2016 and to ‘United we can’ in 2018 and the most recent, the ‘Stand UP 2020’ campaign, which was personally dubbed by my person. The campaign slogan at the time was chosen because we believed it was time for the UP party to stand up and fight for true democracy for the people of St. Maarten,” she said.

“My personal campaign slogan became a spin-off of that slogan: ‘Stand 4 you’. However, after becoming elected as Member of Parliament in February 2020, second Vice Chair in November 2020 and the President of Parliament in November 2021, never in my wildest dreams did I foresee that I would have to be standing UP for myself against ‘for most’ [of – Ed.] those in my own party, a party that I once helped build.”

She ended her livestream by thanking the original and official board members of the UP party installed through the congress of November 2019, associate board members and candidates for giving her an opportunity to serve as a UP candidate elect and her husband, who she said would not be in the political arena any time soon or potentially not ever.

“And as the wife of the founding father of the UP party, it’s been my pleasure to serve in this party as the second overall highest vote getter of the party since its inception … of course on the coat-tails of my husband,” she said, adding that it is not the party that makes the people, it’s the people that make the party. “It’s the people that give it the warmth and the character to function on behalf of the people of St. Maarten. I will continue to be your humble servant and stand for you and always choose Soualiga first, even if it means me having to stand alone.”