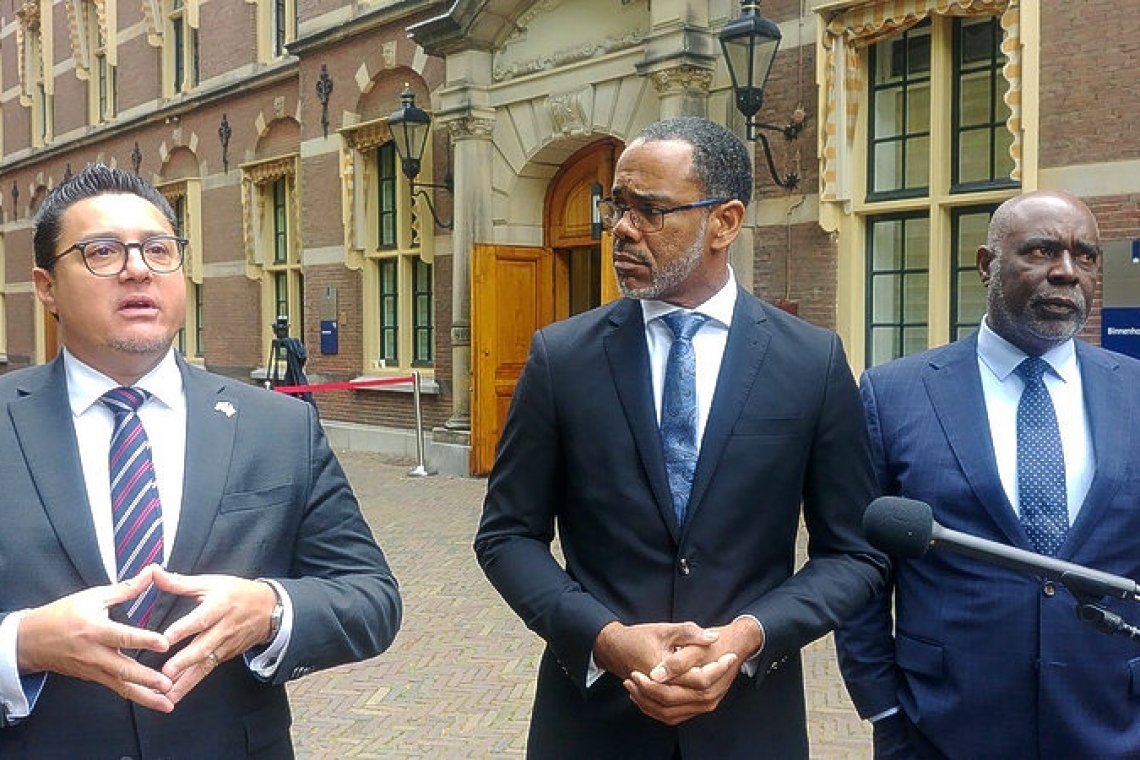 THE HAGUE--The governments of Aruba, Curaçao and St. Maarten on Friday again sought attention for the challenges that they are facing during the coronavirus crisis. The three countries’ ministers of plenipotentiary were critical of the speed that The Hague is demanding in the execution of reform measures.

Ministers Plenipotentiary Anthony Begina of Curaçao, Guillfred Besaril of Aruba and Rene Violenus of St. Maarten expressed frustration after Friday’s Kingdom Council of Ministers meeting. The planned decision-making with regard to the third liquidity-support tranche for the countries has been postponed until Friday, July 10.

The Dutch conditions for the financial loans that the countries are requesting are too strict and not tailored to the specific situation of each country, the plenipotentiary ministers told the media after Friday’s Kingdom Council of Ministers meeting.

“If someone is having trouble holding up one’s pants, you can pull them down or help that person hold them up. I have never heard of a generic condition to cut salaries by 12.5 per cent. That cannot be done in the Netherlands, but it is expected of three small islands,” said Begina of Curaçao.

“Every time, the Netherlands comes with a generic solution and there is no consideration for the differences between the countries,” said Besaril of Aruba, who referred to the fact that Aruba has been a country since 1986 which has never before asked for liquidity support. He said the situation in St. Maarten was entirely different due to Hurricane Irma. “The one-size-fits-all policy is not applicable.”

Violenus of St. Maarten wholeheartedly agreed. He explained that St. Maarten has been in reconstruction mode since Hurricane Irma struck in September 2017. The limited manpower of the local government, which is actually needed for the reconstruction, now has to fully focus on the reform conditions. “We are in a reconstruction phase and a crisis. I find it unfortunate that under these circumstances conditions are tied to assistance.”

The countries were granted too little time to execute the reforms and austerity measures. “Not everything can be done in one month. We are a civilised country. We too have to take into account labour contracts and labour unions,” said Begina, who noted that pension reforms in the Netherlands took many years.

The ministers remarked that the countries were still awaiting documentation with regard to the new “entity” that The Hague wants to establish, through which to channel future tranches of liquidity support. “We have not received the documents. Hopefully, that will happen on Monday, because we need time to prepare for the next meeting,” said Violenus.

On Friday, a decision should be taken on the third tranche during an additional meeting of the Kingdom Council of Ministers. Begina emphasised that the three countries were not asking for free money. “We are asking to get a loan, and we can only get that from the Netherlands.”