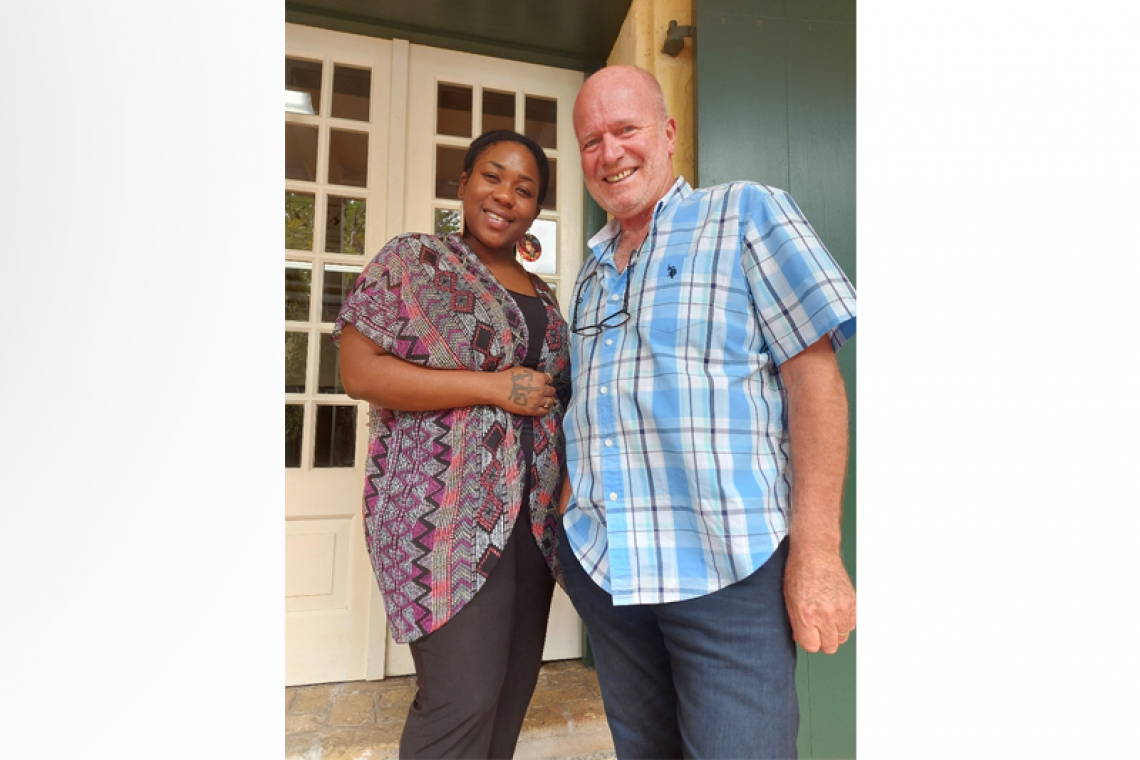 Sjahairah Fleming (left) and Koos Sneek are the faces behind the Statia branch of the Christian-Democrat CDA party. (List Sneek photo)

ST. EUSTATIUS--The national board of the Christian-Democrat CDA party in the Netherlands has recently approved the establishment of a local branch in St. Eustatius. This initiative is a combined effort of independent member of the Island Council Nicolaas “Koos” Sneek and his faction assistant Sjahairah Fleming.

“We both believe that the moment is here for a fresh initiative in the political spectrum on Statia. For this purpose, we have chosen to become a branch of a national party, in our case the CDA, because we believe that to achieve what we want for Statia, direct ties with a national party offers a better way to success.

“It not only gives us a better ear and access to politicians and decision-makers in Parliament and the national government in The Hague, but it also opens the door to cooperation with CDA branches and municipalities on a local level,” Sneek explained.

“Besides this, it allows us access to a vast amount of information and knowledge through the CDA library and the many training options through the CDA Steenkamp Institute. The latter gives us the opportunity to produce better-quality politicians, potential island council members and commissioners.

“CDA Statia has started small with just 10 mainly young members, but it is the party’s intention to expand its membership in the coming months. In December the party will be holding its first general membership meeting when it is the intention to confirm Fleming as party leader. Her first job will be to lead the party into the next Island Council election which will take place in March 2023.

“We do realise that we have a job to do and that the island is facing many challenges. To achieve our goals our party is inviting especially young people to join us and to bring along new and innovative ideas of how to run a party, a government and an island,” said Sneek

He thanked former CDA party leader Sybrand Buma, who introduced him to the party in 2016. “I also want to thank Mr. Marnix van Rij, who as interim chairman of the party has assisted us to start CDA Statia. And of course, I want to thank Sjahairah Fleming for taking up the challenge, because ultimately, she is the one to make the difference. I have all confidence in her.”

Fleming is a 33-year-old single mother of two, a part-time teacher, entrepreneur and faction support for Councilman Sneek. “Having the opportunity to be faction support for the past six months has enabled me to see things from a different perspective and has taught me what it takes to be a true leader. … As a young energetic, talented and hardworking woman of action, I am prepared to become the first party leader of CDA St. Eustatius and make a change for you and the future generation with the support of CDA Nederland.”

She said her focus will be on the high cost of living, improvement of the current medical and educational systems and working towards a self-sustainable Statia.

“It is my goal to create a team of young vibrant professionals with expertise in many sectors. Mainly a trustworthy team that consists of honesty, integrity, loyalty and confidentiality, a team of strategic and critical thinkers, a team with a vision and a mission, a team of pure positive vibes.”

Fleming thanked Sneek for his trust and confidence and for believing in her. “I am very grateful to you for moulding me to become a leader that is strong and transparent, getting me ready to work for the people of Statia.

“I would also like to thank the Democratic Party (DP) for giving me the opportunity to start my political career under their wings, especially my father, president of the DP, for giving me his blessings to continue on my political venture, and also a big ‘thank you’ to the people of Statia for your encouragement and support.”

Fleming also thanked the CDA party “for making this unique step and putting themselves in the position to show support where necessary and needed. The time has come for a ‘breath of fresh air’. CDA Nederland, this is your time to show up or show out. Together, let us do the right thing for the people of Statia.”