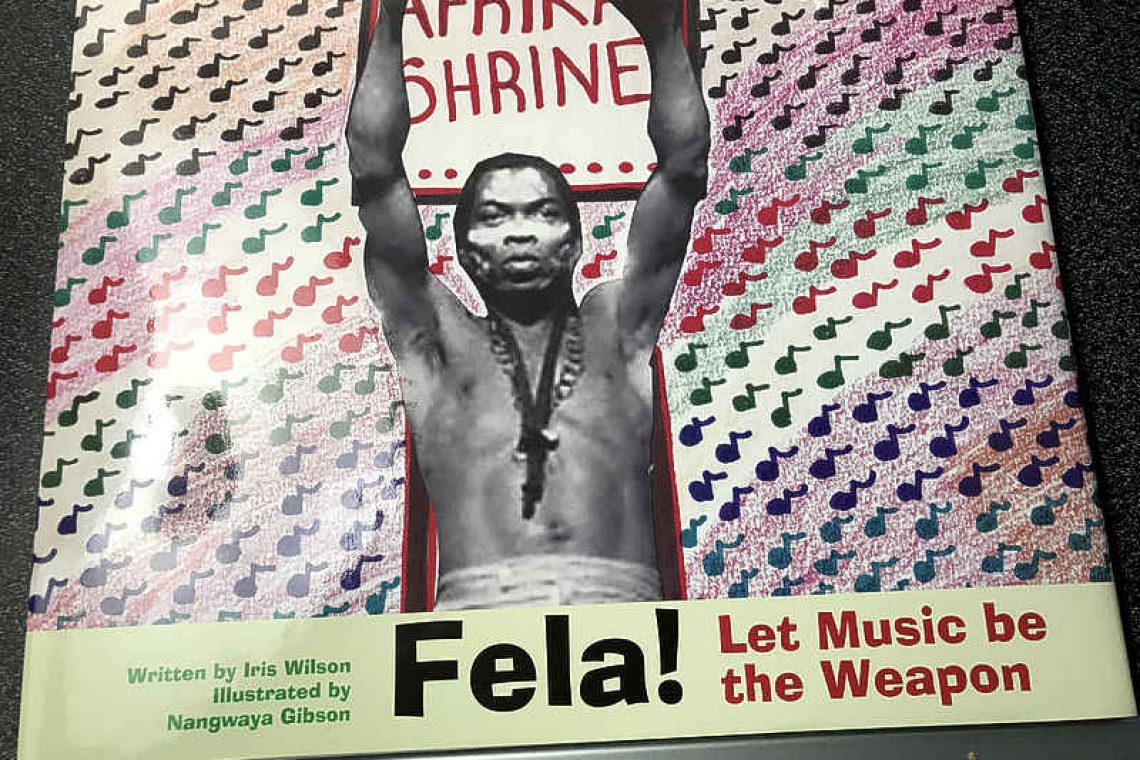 Book cover for ‘Fela! Let Music be the Weapon’.

MARIGOT--A presentation and reading of Fela! Let Music be the Weapon was held for schoolchildren in the Chamber of Commerce on Friday morning as part of Black History Month events on both sides of the island organised by Conscious Lyrics Foundation (CLF) and partners.

Some 250 copies of the adapted cartoon book chronicling the life of the musician Fela have been made freely available to schoolchildren ages 9-12 in St. Martin/St. Maarten, thanks to Nicole de Weever who was a cast member of the original Broadway production of “Fela” and the show’s producer.

The book was written by Iris Wilson, another cast member from the 2009 show, with illustrations done by her son Nangwaya Gibson, both based in New York.

As the book sleeve explains, Fela Kuti was a Nigerian multi-instrumentalist, composer and creator of Afrobeat music. His music was prominent in the 1970s and 1980s and enjoys a revival today.

Fela used his music to criticise and speak out against social injustices inflicted on the people of Nigeria by the Nigerian military dictatorship. As a result, he was jailed, beaten, and ridiculed for using politically charged lyrics against the government. He died on August 2, 1997, in Lagos, Nigeria.

“We performed in the show on Broadway before the producers took the show on the road, so we toured throughout the US, Europe (London and Amsterdam) and Africa (Nigeria),” De Weever explained.

“What was interesting was that Nangwaya was a little boy at the time, about 10 years old, and his mother Iris asked the producers if he could tour with us and they agreed. So, she was home-schooling him while touring at the same time. He got to see all the shows, he knew all the monologues and songs by heart.

“Because Nangwaya was so familiar with the show by then, that led to the idea to produce a children’s book teaching kids about the life and legacy of Fela. Through his eyes and his mother’s words he was able to illustrate the story that she created for children.”

The 10th anniversary of the show and reunion was recently celebrated in New York at the Living Factory.

“When you consider what’s going on socially in the world right now, the content of the book is so relevant,” De Weever added. “Fela’s legacy proves that history repeats itself.”