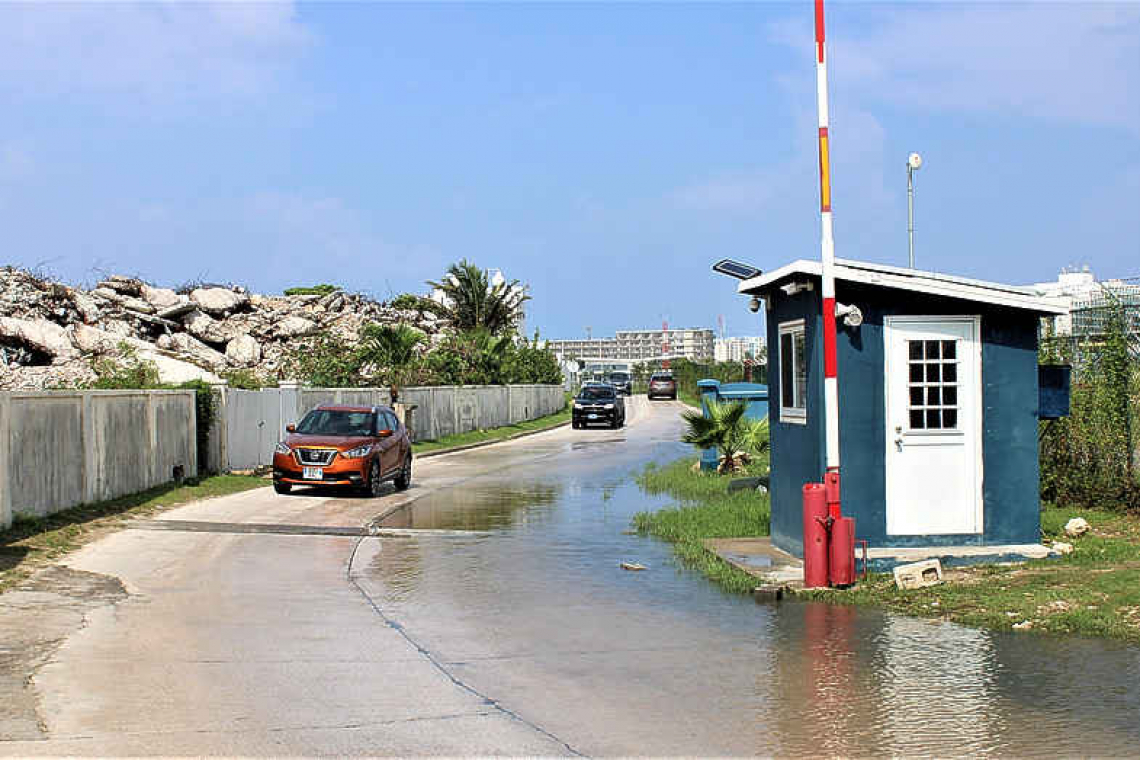 The security hut and boom at the entrance of Beacon Hill Road.

PHILIPSBURG--Beacon Hill has been increasingly targeted by criminals in recent years. Following last week’s multiple car theft, residents say they have been waiting more than a year for Minister of Public Housing, Environment, Spatial Planning, and Infrastructure VROMI Egbert Doran to sign a permit for extra security for the neighbourhood.

The application for the permit has been sitting on the Minister’s desk since August 2020. Minister Doran has not answered multiple requests from the homeowner’s association and the law firm representing the residents, Lexwell Attorneys at Law, to sign the permit that was approved by Doran’s predecessor.

In 2019, homeowners united in the Pride of Beacon Hill Association thought they had found the solution to the increasing violence. They spent the following year developing a plan with then-Secretary of VROMI Chris Wever, Attorney General Cornelius de Weever, Police Chief Carl John of the St. Maarten Police Force KPSM, Community Police Officers, and management of Princess Juliana International Airport PJIAE to construct a security hut and boom at the entrance to the neighbourhood.

Prior to this safety measure there were over twenty-four car related thefts per year. The neighbourhood was faced with armed robberies, murders, and violent attacks against families inside their homes. One of the residents had a gun pressed to his chest on two occasions.

The idea for a security hut resulted from an incident eleven years ago. At the time two men entered a house in Beacon Hill and threatened the homeowner with a machete. That incident led to a small group of neighbours, on a cul-de-sac at Beacon Hill point, placing a hut and boom at the entrance to their road. That section of the Beacon Hill district has had zero crime since, according to the Pride of Beacon Hill Association.

Two years ago, the rest of Beacon Hill united and obtained the proper approvals from the government departments to place a security hut at the main road. “We were fully supported in our effort to reduce crime in the rest of Beacon Hill,” residents said. “Since the Beacon Hill entry hut and boom staffed with guards has been implemented, crime has dropped 90 percent. In fact, last week, two cars were stolen, and a neighbour tracked the thieves down assisted by entrance security who had documented the thieves entering and exiting the neighbourhood. Two men and a woman were arrested the next day.”

Last year residents of Beacon Hill were shocked to learn of the murder of schoolteacher Rhonda Thomas, who lived in an apartment in their neighbourhood. “Shortly after the sad and unfortunate murder, an arrest was made using our entry security tracking,” a member of the Pride of Beacon Hill Association said. The suspect of the murder is currently in pre-trial detention.

The Pride of Beacon Hill Association offered to dedicate the security hut in memory of Rhonda Thomas. “The family appreciated the offer but gracefully declined,” residents said.

Beacon Hill’s cooperation with government started in 2004, leading to numerous improvements in the neighbourhood. “At the time the roads were all sand,” some of the early residents recall. “The Pride of Beacon Hill Association worked with government to pave the roads. We as neighbours raised tens of thousands of dollars to purchase asphalt and concrete materials needed. Government then hired Windward Roads to provide the labour and engineering, and together we saw this project become a success.”

Residents concluded: “Often people look to government for answers and solutions, however, cooperation of the private and public sector, neighbours and government working together is the most effective way forward.”

The neighbourhood recently requested quotations from companies for solving the water drainage problem on the main road. Every time it rains, the entrance to Beacon Hill fills up with water. Residents plan to contribute to a rainwater evacuation well. This drainage solution as well as the security hut need to be approved by current Minister of VROMI Egbert Doran.

“The minister has refused to sign the permit for PBHA’s security hut and boom since August of 2020. This hut was constructed under emergency order of the prior Minister of VROMI, Minister Wever, with the condition that we submit for the permit,” the Pride of Beacon Hill Association wrote on October 15 to the Ombudsman, as part of an official complaint against the minister of VROMI allowing new landowners to demolish a concrete house and clear three plots, taking down cottages and trees, without the necessary permit. Confirmation was received from VROMI that the developer did not apply for a civil works permit. Landowner Herbert ‘Topper’ Daboul was recorded saying that he obtained verbal approval of minister Doran to clear the land.

Meanwhile the request from the homeowner’s association for a permit for the security hut, has been awaiting confirmation of approval for 14 months. Without the permit, the association can’t have electricity installed in the hut, nor operate it legally. “Our continued inquires on receiving the paperwork signed back on the permit for our records, has met with only statements that the permit has been submitted to Minister Doran and he has not signed it yet.” 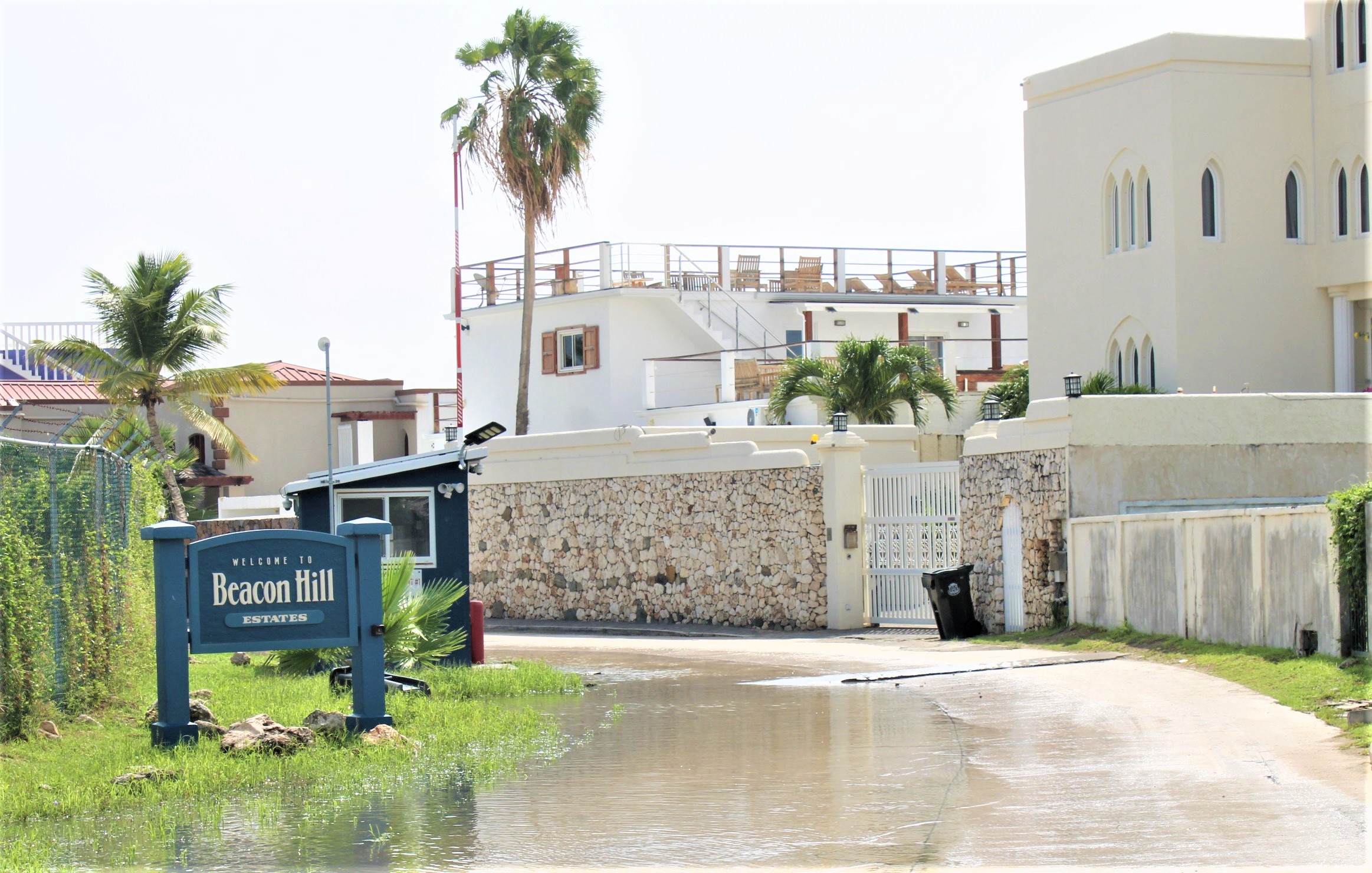