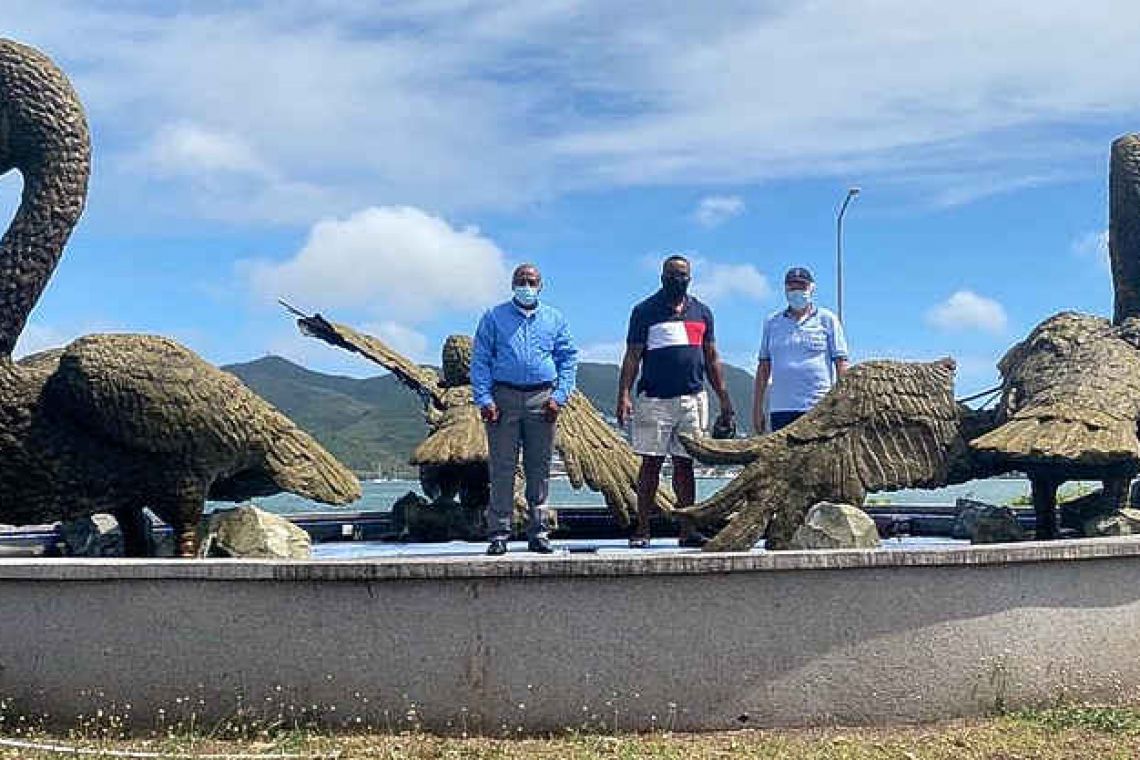 AIRPORT--The three brown pelican statues at the airport roundabout will soon be restored to their former glory, thanks to the sponsorship of American couple Jim and Janet Eddins. This was announced by Princess Juliana International Airport (PJIA) operating company PJIAE on Sunday.

“My wife and I have been coming to St. Maarten for over 20 years and have now purchased a local residence. We have noticed that no one had repaired the cast bronze pelican statues and we were made aware of the cash-flow issues that the airport and country are facing since Hurricane Irma in 2017. It has been our outlook that each of us should give back to our community,” said co-sponsor Jim Eddins when asked how they decided on sponsoring the statues.

The couple – who hail from Blairsville, Georgia – first approached Claudia Arrindell of St. Maarten Tourist Bureau (STB) about the idea. She then set up meetings that helped make the sponsorship a reality.

The restoration will be done by Nigeria-born St. Maarten sculptor Michael Maghiro, who also made the original statues.

“The American couple has come to the rescue of three of St. Maarten’s most beloved pelicans and has committed to fund the expense at no cost to the PJIAE. I disliked seeing the statues in their dilapidated state and I am happy to share the cost with the charitable couple,” said Maghiro.

“Following a joint approval by the [PJIAE – Ed.] management board, it was disclosed that the range of repairs will be diverse, as a wide range of materials will lend to the restoration of the broken, cracked and chipped areas. The sculptor will attach the replacement pieces and update the bronze colour, whilst uplifting the original style of the statues. This is similar to what was recently done to other statues located throughout the island.

“Over the years, the airport has featured various art forms of the brown pelican. Similar art was exhibited in the ceiling of the former airport structure (yellow building) in the arrival hall, and throughout the floors of the current terminal building,” said PJIAE Chief Operations Officer (COO) Michel Hyman.

The three pelican statues were officially unveiled in May 2014, and were extensively damaged during Hurricane Irma only three years later.