AIB Bank: ‘PJIA has secured the best transaction and the best interest rate’ 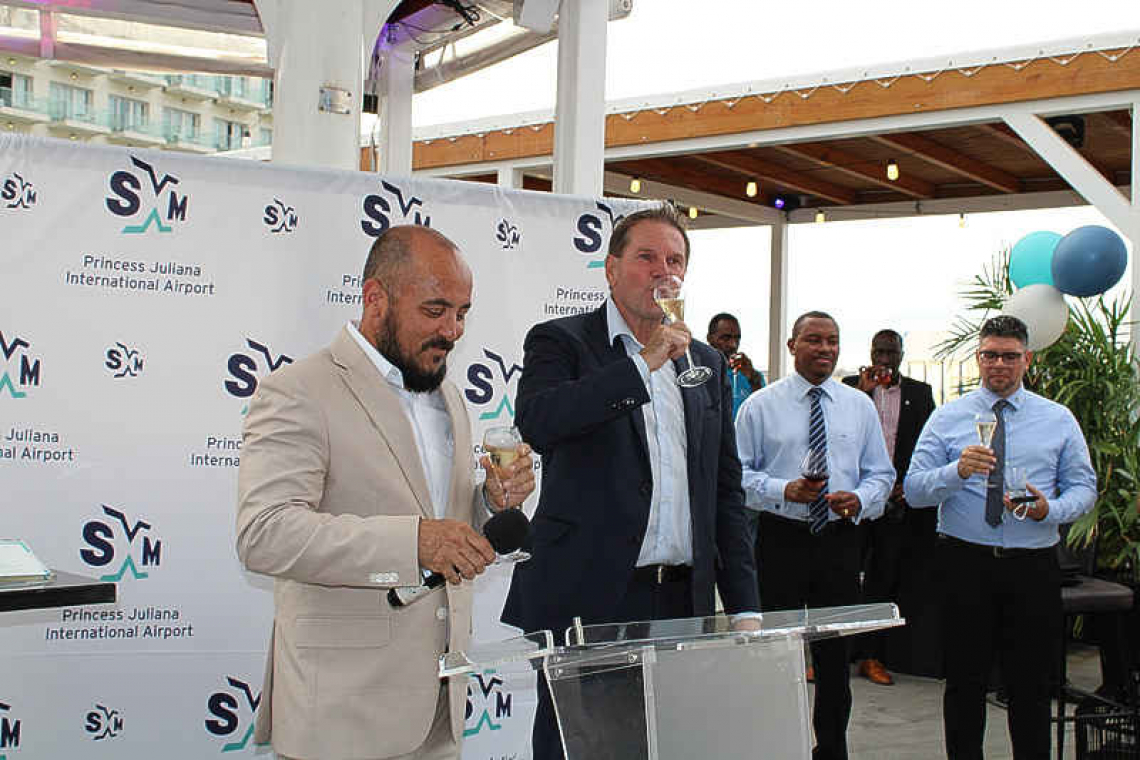 MAHO-- Princess Juliana International Airport (PJIA) celebrated on Wednesday the completion of the successful re-financing of its 2012 loan with a new and more-favourable US $90 million loan.

The celebratory reception took place at Mimosa Sky Lounge in Maho where many airport stakeholders and the Council of Ministers were in attendance. The occasion marked an important milestone for the airport in line with operating company PJIAE’s strategy to rebuild the airport for the future of St. Maarten.
PJIA Chief Executive Officer (CEO) Brian Mingo said in his opening remarks that committed local and regional participation were key to this successful refinancing, before crediting PJIA Chief Financial Officer (CFO) Ben van der Klift for bringing it “across the finish line.”
“The airport has gone through two major crises and we are not out of the woods yet, but we are getting there. The numbers in the first quarter this year are reflecting the numbers of 2019 and that brings confidence to the market,” Mingo noted. “I want to thank all the teams who have accomplished this, because we are coming back even stronger. We are building a new state-of-the art terminal that the region will also benefit from. What’s been put together in this re-financing is an example that many will be very jealous of.”
Van der Klift explained that the impact of Hurricane Irma in September 2017 and then COVID-19 had left the airport in dire straits.
“The loan that we had with US lenders was very complex. We had to pay $14 million annually to these investors with interest and we were heading to a so-called ‘bridge’. Because of Irma and COVID we couldn’t live up to all our obligations. We were in breach of contract, which wasn’t waived. 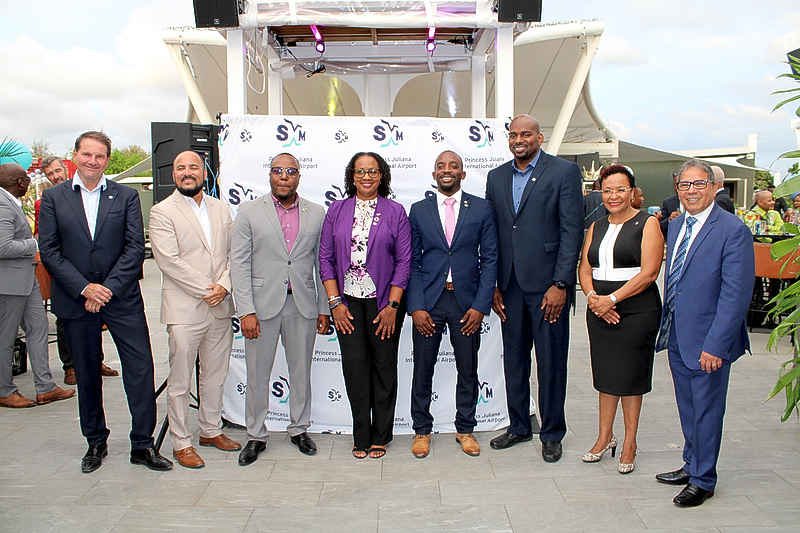 “We are doing better now, but not well enough to not get into that breach again. When you have a breach, you have to pay and you are in the hands of US lenders. We spent a ton of money on legal fees, the last time $1.2 million to legal companies. The 5.5 per cent interest we were paying could easily have risen to 6.5 per cent.”
Fortunately, relief was found in the new loan with much more favourable conditions, thanks to seven local and regional lenders.
“Instead of paying $40 million for 2022-2024 we have a two-year holiday period, which means we only pay interest in the coming two years. Effectively that means we have $20 million on our bank account, but it has to be paid back. But we are going up, and when the terminal gets up to speed, we will go up even more, and will have more funds to repay the loans.”
The $20 million, Van der Klift said, will be spent on a new fuel farm, renovating the fire station, which he described as being in “very poor” condition for the firemen, as well as upgrading the infrastructure for the increase and growth of private aviation.
He thanked the many key people and advisers with whom he worked, and expressed much appreciation to the support from the government of St. Maarten.
AIB Bank Aruba Managing Director Frendsel W. Giel, who was the loan arranger, said he had been determined to get the best interest rate for the transaction.
“I can say that this airport got the best transaction, the best interest rate,” he said to loud applause. “It’s one thing to get a good interest rate and a good term but then find the interest rate goes up every year. No, this time, the interest rate is fixed. You have to be proud of yourself in winning the confidence of both local and regional lenders.” 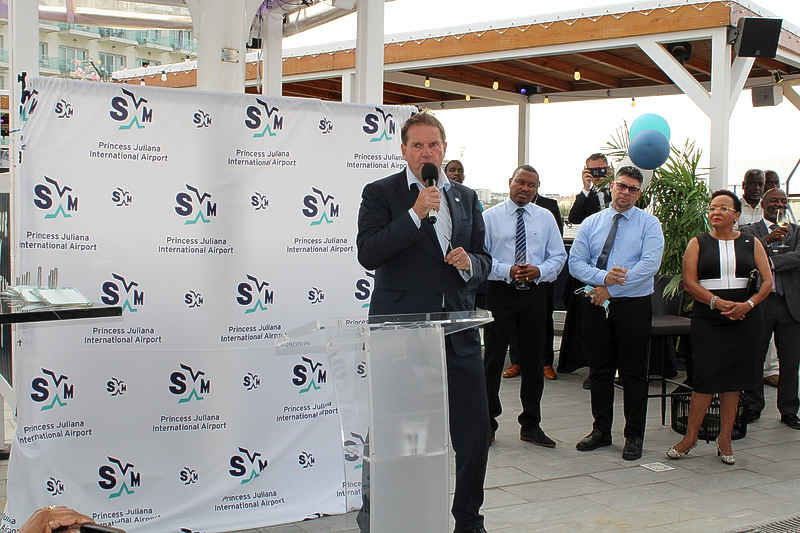 Prime Minister Silveria Jacobs said not enough accolades could go to the airport staff, who she said had been “to hell and back” and had dealt with a lot of negative publicity and in spite of that had continued to work hard.
“We, as government, will do everything to secure the airport’s future, as we are also securing St. Maarten’s future,” she said. “We stayed the course and got to the point, even over holidays, to meet the deadline; we assured shareholders that it was done. Without it we would have put ourselves further back to realise the goals for the airport and St. Maarten.
“I’m happy to see all the developments at the airport. PJIA plays an important role in the development of St. Maarten and our economy,” she added. “By building, extending and improving the facilities on the airport we will be able to welcome more passengers in the years to come.”
Minister of Public Health, Social Development and Labor VSA Omar Ottley, who was standing in for Minister of Tourism, Economic Affairs, Transport and Telecommunication (TEATT) Roger Lawrence, said the airport is “the island’s most prized possession as a gateway to the economy, but most importantly the airport workers are a prized possession too. Without them the airport does not function.”
Minister of Finance Ardwell Irion also spoke on his collaboration with Van de Klift.
Most of the funds (46 per cent) for the loan package came from St. Maarten institutions, 44 per cent from Curaçao-based institutions and 10 per cent from Aruba-based institutions.
An official signing was done on April 4, 2022, whereby AIB Bank N.V. was the arranger of the loan and RBC Trust (Trinidad and Tobago) Limited, served as the facility and security agent.
PJIAE noted refinancing of the loan facility would not have been accomplished without Ministers Jacobs, Irion and Lawrence. The PJIAE management board extended gratitude for their tireless support during the entire refinancing process.