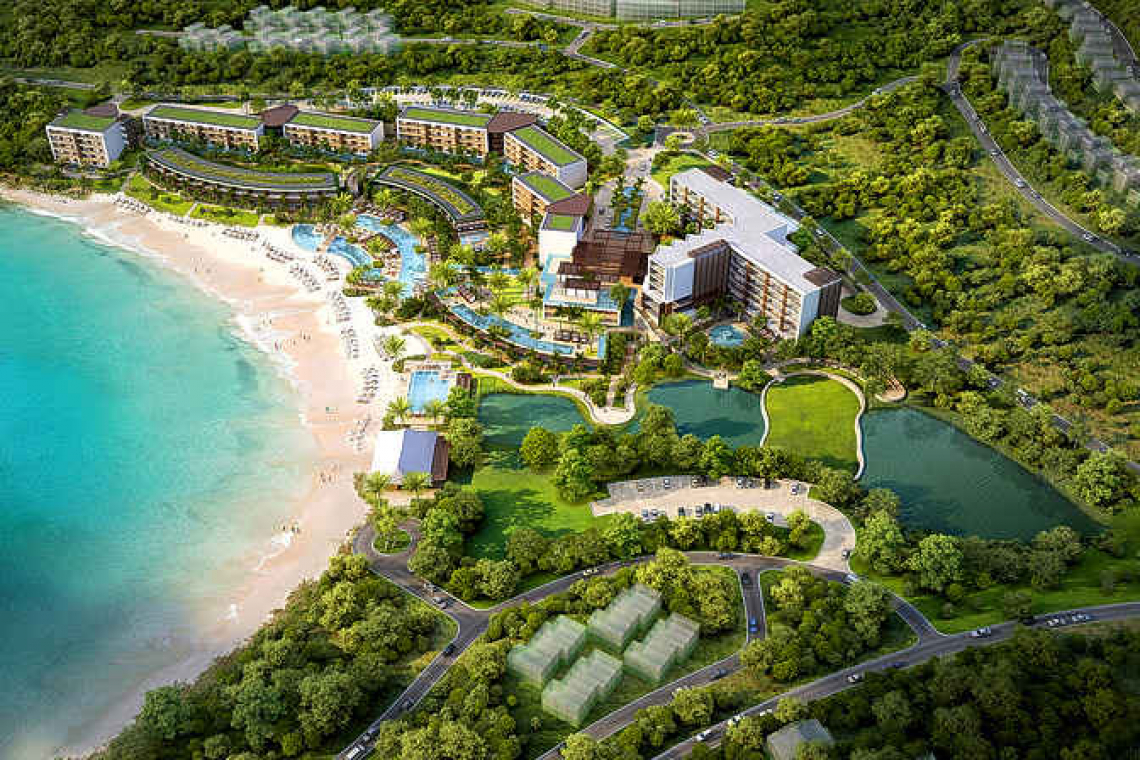 An artist’s rendering of Indigo Bay Hotel and condos.

Additionally, the proposed hotel development is expected to feature large water ponds and greenery areas in keeping with its eco-centric vision, as well as an extensive public parking area for public beach access to Indigo Bay.

“The timing for such a development could not have come at a more opportune time, as country St. Maarten is tasked with creating new and innovative strategies to counter the global economic crisis due to the pandemic,” it was stated in the release.

In an economy whereby hospitality and tourism are at the centre of its recovery, it is expected that the development of a high-end branded hotel in St. Maarten would provide an enormous boost to this endeavour by enhancing several areas in tourism.

According to the release it can enhance St. Maarten’s global attractiveness as a prime tourist destination; increase hotel accommodation by approximately 20 per cent; increase the number of annual visitors to St. Maarten by 32,000 based on hotel occupancy of 65 per cent (double) and an average stay of five nights; and attract high value tourists who may choose St. Maarten as a vacation destination as opposed to accessing surrounding islands through its air and sea ports of entry, it was stated in the release.

Other benefits mentioned were employment and training opportunities. According to the release the development can aid in providing jobs during the planning and construction period for more than several hundred technical personnel and local contractors alike; ensure several hundred employment opportunities for locals to sustain resort operations once construction has been completed; provide internship opportunities for residents studying locally or internationally in the field of hospitality and hotel management; create downstream opportunities in the hospitality, maritime, transportation, etc., sectors (e.g. tour operators, boat charters, local restaurants and bars, etc.).

In the area of the economy it can create new foreign direct investment and foreign exchange earnings; provide additional revenues for St. Maarten through substantial long-term and ongoing contributions to its tax revenue per annum; contribute to a major boost of St. Maarten’s gross domestic product (GDP); and increase real estate sales over the next three years.

The proposed world-class hotel development, once completed, will be managed by an internationally-recognised hotel brand, which will lend itself to greater global recognition, the release said.

“The addition of an international brand affiliated with one of the main hotel companies in the world can be expected to drive substantial additional business to the island down the line. The projected marketed average daily rate (ADR) for hotel rooms at the proposed new hotel development is expected to be substantially higher than the current average daily rates on St. Maarten.

“The announcement in the international (travel) media of the planned development of a high-end branded hotel project at Indigo Bay Development would assist in highlighting St. Maarten to international travel industry professionals and suppliers. Airlines, travel wholesalers and independent travel agencies will take further notice, as will investment firms and hotel development companies interested in possibly adding St. Maarten to their portfolio for future investment opportunities.”

The CBD and the principals of the proposed hotel development seek to assure that the interest of the citizenry and of the environment are paramount to their endeavour and in doing so are cognisant of the misinformation being circulated widely about said development and would like to provide information to address same, the release said.

One such instance has been the reported height of said development whereby many may confuse “height” (above the ground) with “elevation” (above the sea level). That being stated, the proposed hotel is designed not to directly obstruct any views, whereby the maximum roof heights of the multi-storey buildings are between 20.5 and 27.5 metres above sea level, the release noted.

Further to this, CBD has requested approval for certain variances to Planning Permit PP-05088 Cay Bay Development. These requests were based on the commitment by CBD and its principals to invest not just in the infrastructure of the luxury hotel, but also in its surroundings. To that end, the requested approval will finally provide the assistance required to address the needs of the surrounding coastlines, beach facilities and marine life that were severely eroded and affected post-Hurricane Irma.

In terms of special consideration per the variances request submitted, CBD and the principals of the proposed hotel development have indicated that some six acres of the overall hotel site of about 18 acres is projected as a green zone, including the retention ponds that were originally constructed at Indigo Bay Development by CBD.

Towards beach development and amended setbacks in certain areas, the principals of the proposed hotel development have indicated that they are willing to look at compensation by way of the creation of the dedicated green zone with beach access and parking mentioned above, via a beach restoration/protection programme and/or the installation of reef balls in the bay.

The intention of the beach restoration initiative is geared towards having an environment that complements the hotel and its many amenities. The beach (Indigo Bay) will be a public beach as per the “beach policy” and the many upgrades outlined above are intended to ensure it is safe, aesthetic, and enjoyable for all.

The new inhabitable buildings of the hotel development, with the exception of a small wedge of one two-storey building comprising less than 200 square metres, do not infringe on said “beach policy” nor will they.

On October 2, 2020, in accordance with the National Ordinance on Spatial Development Planning (AB 2013, GT no 144) and the Planning Permit PP-05088 ‘Cay Bay Estates’, Article 5.4, the VROMI minister announced placement of the master plan Indigo Bay Hotel and Condo by developer Cay Bay Development NV (CBD) on public review for 30 days.

As such, the principals of the proposed hotel development at Indigo Bay Development remain committed to full transparency in their undertakings and adherence to all relevant policies and laws of St. Maarten, it was stated in the release.