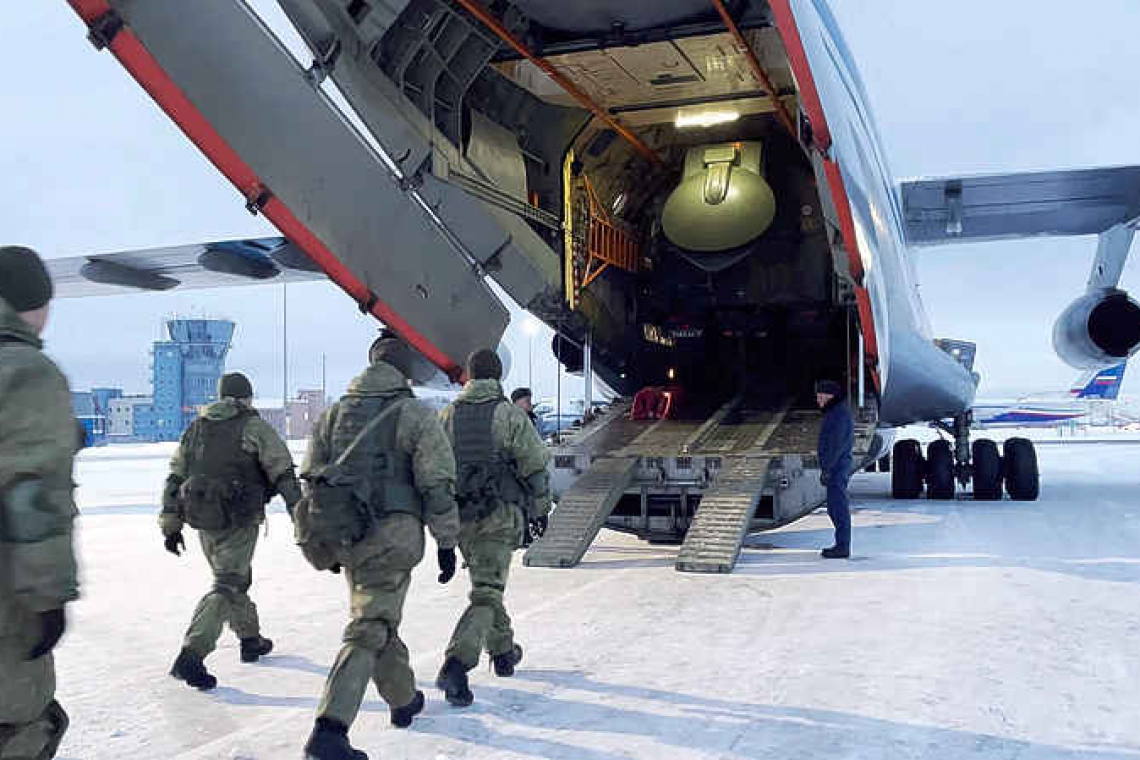 Russian servicemen board a military aircraft heading to Kazakhstan, at an airfield outside Moscow, Russia on Thursday, in this still image taken from video.

ALMATY--Fresh violence erupted in Kazakhstan's main city of Almaty on Thursday as Russia sent in paratroopers to put down a countrywide uprising in one of Moscow's closest former Soviet allies.

Police in Almaty said they had killed dozens of rioters overnight into the early hours of Thursday morning. Authorities said at least 18 members of the security forces had died, including two found decapitated. More than 2,000 people were arrested.
After a night of running street confrontations between protesters and troops, a presidential residence in the city and its mayor's office were both ablaze, and burnt out cars littered the city, Reuters journalists said.
Military personnel regained control of the main airport, seized earlier by protesters. Thursday evening saw renewed battles in Almaty's main square, occupied alternately by troops and hundreds of protesters throughout much of the day.
Reuters reporters heard explosions and gunfire as military vehicles and scores of soldiers advanced, although the shooting stopped again after nightfall. TASS news agency quoted witnesses as saying people had been killed and wounded in the new gunfire.
The Russian deployment was a gamble by the Kremlin that rapid military force could secure its interests in the oil and uranium-producing Central Asian nation, by swiftly putting down the worst violence in Kazakhstan's 30 years of independence. Oil production at Kazakhstan's top field Tengiz was reduced on Thursday, its operator Chevron said, as some contractors disrupted train lines in support of the protests. Oil prices rose more than 1% on Thursday and uranium has also jumped since the clashes erupted.
The internet was shut down across the country, disrupting bitcoin mining in one of the world's biggest crypto miners and making it impossible to gauge the extent of the unrest. But the violence was unprecedented in a state ruled firmly since Soviet times by leader Nursultan Nazarbayev, 81, who had held on to the reins despite stepping down three years ago as president.
Nazarbayev's hand-picked successor, President Kassym-Jomart Tokayev, said he called in the Moscow-led military alliance of ex-Soviet states. He blamed the unrest on foreign-trained terrorists who he said had seized buildings and weapons.
"It is an attack on our citizens who are asking me... to help them urgently," he said.
Moscow said it would consult with Kazakhstan and allies on steps to support the Kazakh "counter-terrorist operation" and repeated Tokayev's assertion that the uprising was foreign-inspired. Neither Kazakhstan nor Russia provided evidence to support that.
Moscow did not disclose how many troops it was sending, and it was not possible to determine if any were involved in Thursday's unrest. The general secretary of the ex-Soviet alliance - the Collective Security Treaty Organisation - told RIA news agency that the overall peacekeeping force would number about 2,500 and could be strengthened if necessary. It was expected to be a short mission of "a few days or weeks", RIA quoted him as saying.
The United States said it was closely monitoring reports of the deployment and added it had questions about whether the forces were legitimately invited to the country. "We have questions about that deployment precisely because Kazakhstan, the government of Kazakhstan... has its own resources, and the government is and has been well fortified," State Department spokesperson Ned Price said.
"We will be watching very closely for any violations of human rights and any efforts or actions on the part of foreign forces to seize Kazakh institutions," he added.