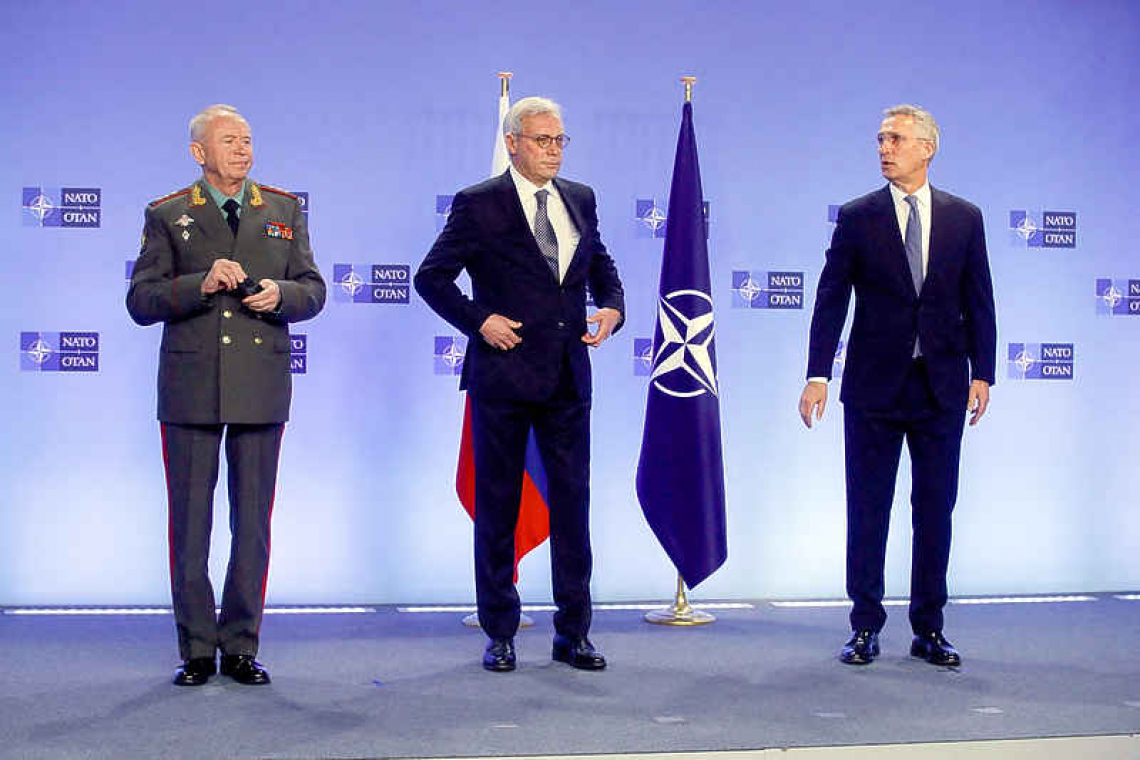 BRUSSELS--NATO said on Wednesday it was willing to talk to Russia about arms control and missile deployments to avert the risk of war in Europe, but Moscow said the situation was "very dangerous" and the way forward was unclear.

The gulf between Russia's position and that of the United States and its allies appeared as stark as ever after four hours of talks in Brussels, the second attempt this week to defuse a crisis provoked by the massing of Russian troops near Ukraine.
NATO Secretary General Jens Stoltenberg said the alliance was willing to hold arms talks but would not allow Moscow to veto Ukraine's ambition to join NATO one day - a core demand on which Russia says it will not yield. "There is a real risk for new armed conflict in Europe," Stoltenberg told a news conference.
"There are significant differences between NATO allies and Russia," he said. "Our differences will not be easy to bridge."
Russian Deputy Foreign Minister Alexander Grushko said Moscow was ready to talk about weapons deployment and verification measures, but would not allow its proposals to be cherry-picked. At a lengthy news conference, Grushko said Russia could not take seriously NATO's claim to be a defensive alliance that posed no threat to it, and said it would respond symmetrically to any attempt to contain or intimidate it.
"If there is a search for vulnerabilities in the Russian defence system, then there will also be a search for vulnerabilities in NATO," he said. "This is not our choice, but there will be no other path if we fail to reverse the current very dangerous course of events."
Grushko later said Moscow would use military means to neutralise security threats if diplomacy proved insufficient. Interfax news agency quoted Russian Deputy Defence Minister Alexander Fomin as saying NATO's "ignoring" of Russian security proposals created the risk of "incidents and conflicts".
This week's talks - beginning with a Russia-U.S. meeting in Geneva on Monday and due to continue on Thursday in Vienna at the Organisation for Security and Cooperation in Europe - come at one of the most fraught moments in East-West relations since the Cold War. Russia denies planning to invade Ukraine but says it needs a series of guarantees for its own security, including a halt to further NATO expansion and a withdrawal of alliance forces from central and eastern European nations that joined it after 1997.
U.S. Deputy Secretary of State Wendy Sherman reiterated that those demands were "non-starters". Sherman told reporters it was hard to understand why a nuclear-armed Russia felt threatened by its much smaller neighbour and why it was conducting live-fire exercises near its border with Ukraine.
"Is this about invasion? Is this about intimidation? Is this about trying to be subversive? I don't know, but it is not conducive to getting to diplomatic solutions," she said.
Russia had not given any commitment to de-escalate, she said, but nor had it said it would not do so.
Despite the gulf in positions, Stoltenberg said it was positive that all 30 NATO allies and Russia had "sat down around the same table and engaged on substantive topics."
Grushko said he could not recall such a sharp and frank discussion with NATO. He said progress was possible, but there were some areas where Russia could not step back.
He said Moscow wanted written answers from NATO on its proposals and to hear from the alliance how it would implement them or - if not - why it could not do that.