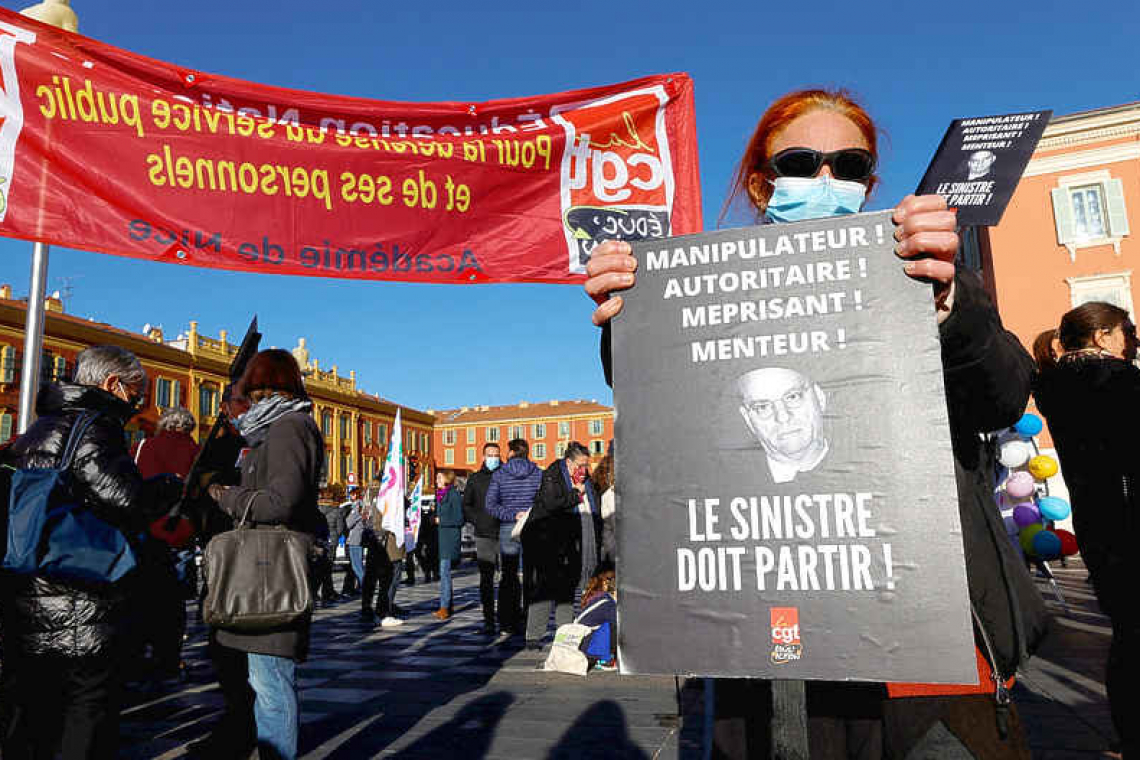 French teachers attend a demonstration as part of a nationwide day of strike and protests against sanitary conditions in schools, in Nice amid the rise of coronavirus disease (COVID-19) cases due to the Omicron variant in France, on Thursday. The slogan reads "manipulative, bossy, contemptuous, liar, Education, Youth and Sports Minister Jean-Michel Blanquer must go".

PARIS--Tens of thousands of French teachers angry with the government's COVID-19 rules walked off the job on Thursday and took to the streets to demand better protection for pupils and staff against infection.

"Stop your contempt," and "We're fed up with tests" teachers proclaimed on banners in rallies across France, calling for the government to provide them with FFP2 face-masks and to stop changing the rules so often.
Teachers, parents and school directors have struggled to cope with the many twists and turns in COVID rules on schools. New testing requirements announced a day before schools restarted after the Christmas holidays and changed twice since increased the anger. "We had reached such a level of exasperation, tiredness, and anger that we didn't have any other option but to organise a strike to send a strong message to the government," said union leader Elisabeth Allain-Moreno.
Many at the rallies called for the resignation of Education Minister Jean-Michel Blanquer. A government source said he was unlikely to lose his job so close to April's presidential election.
Prime Minister Jean Castex will, however, meet teachers' representatives later on Thursday, his office said, in a sign the government was keen to try and quell their anger. The government has so far stood by its policy to keep classes open and requiring all pupils in contact with an infected person to get tested three times. Some degree of complication is the price to pay to keep schools open, it said.
"I know it's tough, but a strike does not solve problems. One does not strike against a virus," Blanquer told BFM TV earlier this week.
Infections have surged in schools as France has set records with close to 370,000 new daily cases, sending families scrambling to get their children tested. "My children and I, we're fed up with getting tested every other day," said Corinne Courvoisier, the mother of seven-year old twins, who had joined the protest rally in Nice.
"We started testing Nelson and Elsa on Friday because there was a suspicion of a positive COVID-19 test in Nelson's class, so Friday, then Sunday, then Tuesday, and then yesterday we were sent a letter from the director that there was another suspected case in Elsa's class ... We're never seeing the end of it."
Unions said 75% of teachers in primary schools and 62% in high schools walked out, while the Education Ministry said less than half those numbers did. Strike turnout was unusually high in either case.
Some schools closed due to the strike, others were open only for children of health workers while some operated as normal. "The pandemic has put the spotlight on a policy of drastic staff reduction in public education," teacher Laurence Fourteuil said at the Paris rally. "It's not against the virus that we're on strike. We are on strike against policies that are already attempting to squeeze staff."