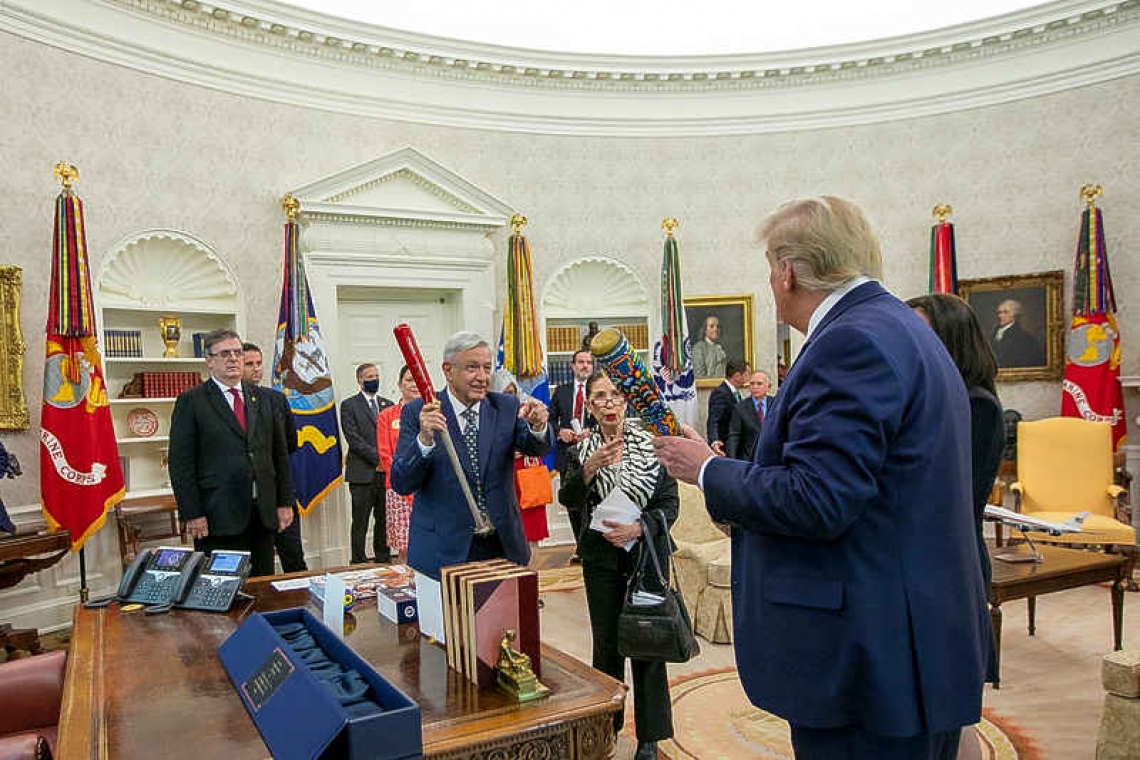 The leftist Mexican leader made his first foreign trip as president to the White House, where he and Trump accentuated the positive in their public remarks while largely glossing over their differences on business, illegal drugs and migration.
"What I most appreciate is that you have never tried to impose anything on us that violates or damages our sovereignty," Lopez Obrador said in Spanish, turning to look at Trump as the two spoke in the Rose Garden before signing a joint declaration.
"You have never attempted to treat us like a colony," he added. "I am here to say to the people of the United States that your president has treated us with kindness and respect."
The White House said the Mexican delegation, including Lopez Obrador, were tested for the coronavirus before they met with Trump. Mindful of the pandemic, which is still surging in Mexico and the United States, the men did not shake hands when Trump greeted Lopez Obrador on his arrival. Neither wore face masks.
There were no tangible signs of progress on such issues as counter-narcotics and Lopez Obrador's attempts to renegotiate billions of dollars worth of energy infrastructure contracts. The two men signed a joint declaration that hailed the July 1 start of United States-Mexico-Canada Agreement, which replaced the North American Free Trade Agreement that Trump, a Republican, reviled.
Trump said the countries were committed to "a shared future of prosperity, security and harmony" and joked that he and leftist Lopez Obrador had forged "a great relationship ... maybe against all odds."
Critics argued Trump aimed to use the visit to gain support among Hispanic voters ahead of the Nov. 3 U.S. presidential election in which he is expected to face Democrat Joe Biden. Lopez Obrador was not scheduled to meet Biden, a former vice president who is favoured by Hispanic U.S. voters, according to opinion polls.
"For a man who said he wasn’t going to the United States to wade into electoral waters, he did just that," said former Mexican ambassador to the United States Arturo Sarukhan.
Lopez Obrador's comments about Trump being respectful toward Mexicans will have left migrant leaders "completely aghast," Sarukhan added.
But Porfirio Munoz Ledo, a congressman from Lopez Obrador's National Regeneration Movement (MORENA) who at times criticizes his own government, said the visit was a tribute to the Mexican leader's diplomatic skills. "It's exemplary," he said, saying Trump treated his Mexican guest with respect and defied the expectations of some critics to show him up.
Lopez Obrador brushed off criticism at home to meet Trump, who is widely disliked in Mexico because of his incendiary remarks. Trump described Mexican immigrants as rapists and drug runners during his 2015-16 presidential election campaign and vowed to make Mexico pay for his planned border wall.
In May 2019, Trump threatened tariffs against Mexico to force it to reduce the number of illegal immigrants entering the United States. He only backed off after Lopez Obrador agreed to deploy security forces and other steps to stem the flow of Central American migrants.
On Twitter, Biden accused Trump of fomenting racism. "Trump launched his 2016 campaign by calling Mexicans rapists," Biden wrote. "He's spread racism against our Latino community ever since."