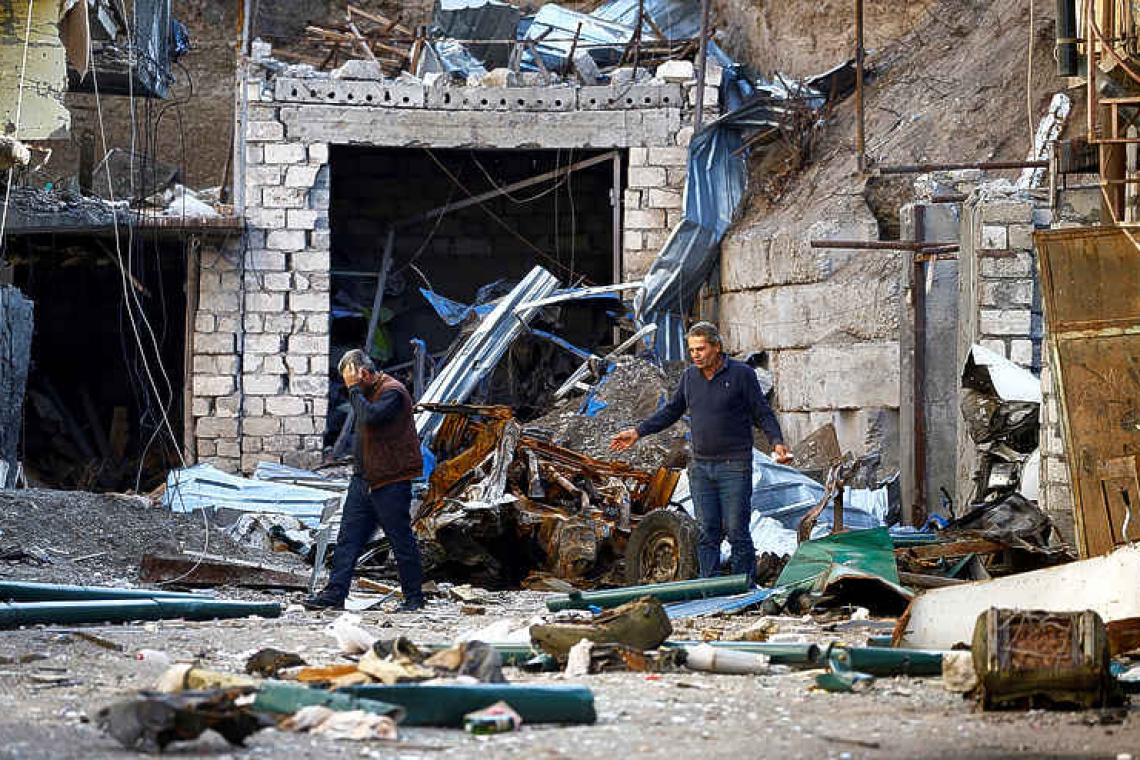 YEREVAN/BAKU--Armenia and Azerbaijan accused each other on Tuesday of violating a ceasefire agreed three days ago to quell fighting over the Nagorno-Karabakh enclave, drawing warnings from international groups of a humanitarian crisis.

The Russia-brokered truce is buckling despite mounting calls from world powers to halt the fighting, with U.S. Secretary of State Mike Pompeo among those urging greater commitment to the ceasefire terms.
Turkey and Armenia exchanged recriminations, each blaming the other for exacerbating the crisis around Nagorno-Karabakh, which is internationally recognised as part of Azerbaijan but governed and populated by ethnic Armenians.
Earlier on Tuesday, a Reuters cameraman witnessed shelling in the Nagorno-Karabakh town of Martuni. A Reuters television crew in Terter in Azerbaijan also said the city centre was being shelled.
Azerbaijan accused Armenia of "grossly violating the humanitarian truce," which was agreed on Saturday to allow the sides to swap prisoners and bodies of those killed. Defence ministry spokesman Vagif Dargiahly said Armenia was shelling the Azeri territories of Goranboy and Aghdam, as well as Terter. Azeri forces were not violating the truce, he added.
Armenian defence ministry spokeswoman Shushan Stepanyan denied the accusation. She said Azerbaijan had resumed military operations "supported by active artillery fire in the southern, northern, northeastern and eastern directions."
The fighting which erupted on Sept. 27, is the worst since a 1991-94 war over Nagorno-Karabakh that killed about 30,000 people. It is being closely watched abroad because of fears Russia and Turkey could get sucked in. Russia has a defence pact with Armenia, while Turkey is allied with Azerbaijan.
Armenian Prime Minister Nikol Pashinyan accused Turkey of muscling its way into the South Caucasus region to further what he called its expansionist ambitions. Turkey denies this. "The problem is that Armenians in the South Caucasus are the last remaining obstacle on its path to implement that expansionist policy," Pashinyan told Reuters.
The "Minsk Group" - a committee set up by the OSCE security watchdog to help mediate in Nagorno-Karabakh - called on the Armenian and Azeri leaders to implement the ceasefire to prevent "catastrophic consequences for the region". The 11-member group is led by the United States, Russia and France. Turkey is also a member but not involved in the Nagorno-Karabakh talks, though it has said it wants to join them.
Turkey's foreign minister Mevlut Cavusoglu told reporters while ceasefire demands were "reasonable", the international community should ask Armenia to withdraw from Azeri territory. "Sadly no such call is being made," he said.
Influential Turkish politician Devlet Bahceli, whose party supports President Erdogan's AKP in parliament, took a more belligerent tone, telling Azerbaijan to secure Nagorno-Karabakh by "hitting Armenia over the head over and over again."