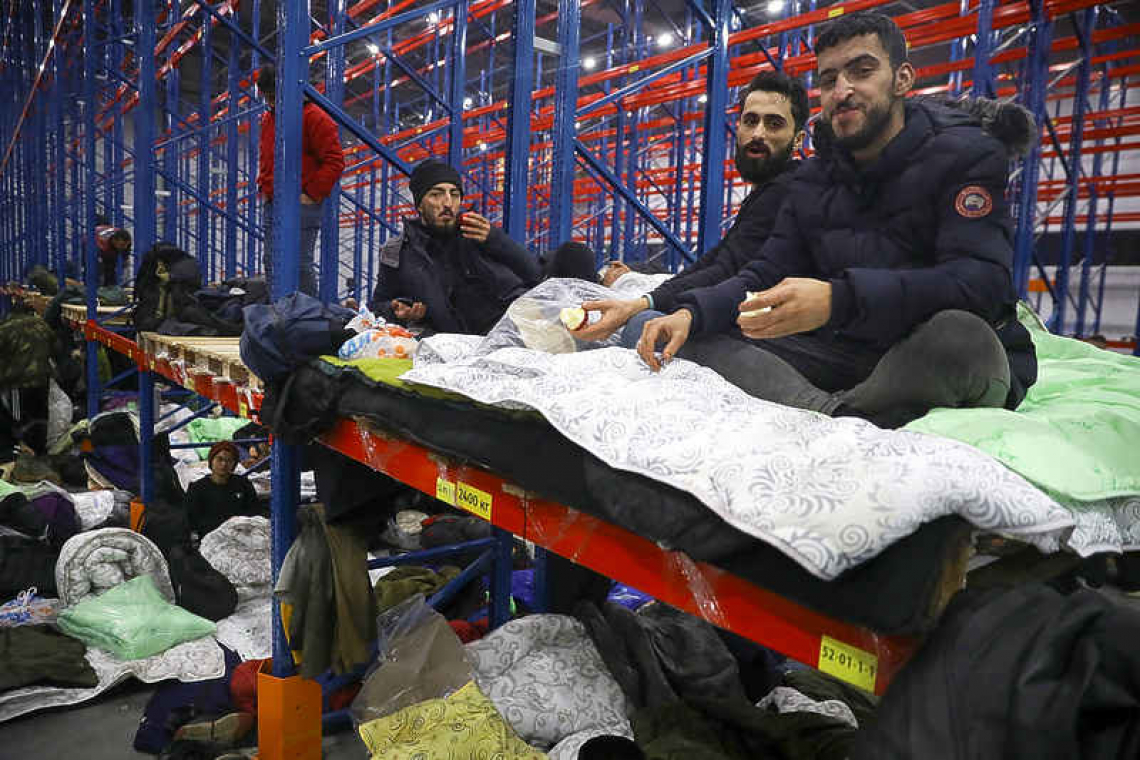 BRUZGI, Belarus--Belarus authorities on Thursday cleared the main camps where migrants had huddled at the border with Poland, in a change of tack that could help calm a crisis that has spiralled in recent weeks into a major East-West confrontation.

In another potential sign of the crisis easing, hundreds of Iraqis checked in at a Minsk airport to fly back to Iraq, the first repatriation flight since August.
However, the European Commission and Germany rejected a Belarus proposal that EU countries take in 2,000 of the migrants currently on its territory, and the United States accused Minsk of making migrants "pawns in its efforts to be disruptive", signalling tensions with the West were far from over.
In any case, Belarus' step to move the migrants to a giant warehouse where hundreds, including young children, could be seen resting on mattresses, meant they were no longer outdoors in freezing temperatures. One Iraqi, Zain Shad, said they were being moved further, to another holding centre.
"We are moving to there because the weather's pretty damn cold. The people are all sick because of the rain yesterday and they are all freezing, and we're now moving on to the camps," he said.
European countries have for months accused Belarus of engineering the crisis by flying in migrants from the Middle East and pushing them to attempt to illegally cross its borders into Poland and Lithuania. Minsk, backed by Moscow, rejects those accusations, but Lithuania's President Gitanas Nauseda said the tough stance taken by the EU was paying off.
"We are seeing the first results - the flights organised by the regime from the Middle East are being stopped, and migrants in Belarus are returning home," he said after speaking with his Polish counterpart.
A spokesperson for the Polish border guard said the camps on the frontier in western Belarus were completely empty on Thursday, which a Belarusian press officer confirmed. The Polish spokesperson added a word of caution, saying "there were groups appearing in other places trying to cross the border. We'll see what happens in the next hours."
In recent weeks, migrants have tried, mostly at night, to cross the frontier, sometimes clashing with Polish troops. In a cruel illustration of the harsh conditions for those camped out, a couple, both injured, told the Polish Centre for International Aid, an NGO, on Thursday morning that their one-year-old child had died in the forest. At least eight more people are believed to have died at the border in recent months.
U.S. Secretary of State Antony Blinken said the United States had the authority to add to sanctions, telling reporters during a visit to Nigeria: "It is profoundly unconscionable that Lukashenko and Belarus have sought to weaponize migration."
The camp clearances came during a week of intensified diplomacy. Germany's Chancellor Angela Merkel spoke by telephone twice to Belarusian President Alexander Lukashenko, normally shunned by European leaders. Belarus said Lukashenko had proposed a plan to Merkel to resolve the crisis, under which the EU would take in 2,000 people while Minsk would send home another 5,000.
But German Interior Minister Horst Seehofer rejected the proposal and talked of misinformation. "If we took in refugees, if we bowed to the pressure and said 'we are taking refugees into European countries', then this would mean implementing the very basis of this perfidious strategy," Seehofer said in Warsaw.
A government source added that Germany had not agreed to any deal, stressing that this was a European problem.
Shortly before the plan was announced, the European Commission had said there could be no negotiation with Belarus over the plight of the migrants. It declined to comment on the proposal, with a spokesperson saying: "This is an artificially created, state-orchestrated crisis and it is a responsibility of Lukashenko's regime to stop it and to solve it."