US defending presidency, not trying to 'save Trump' 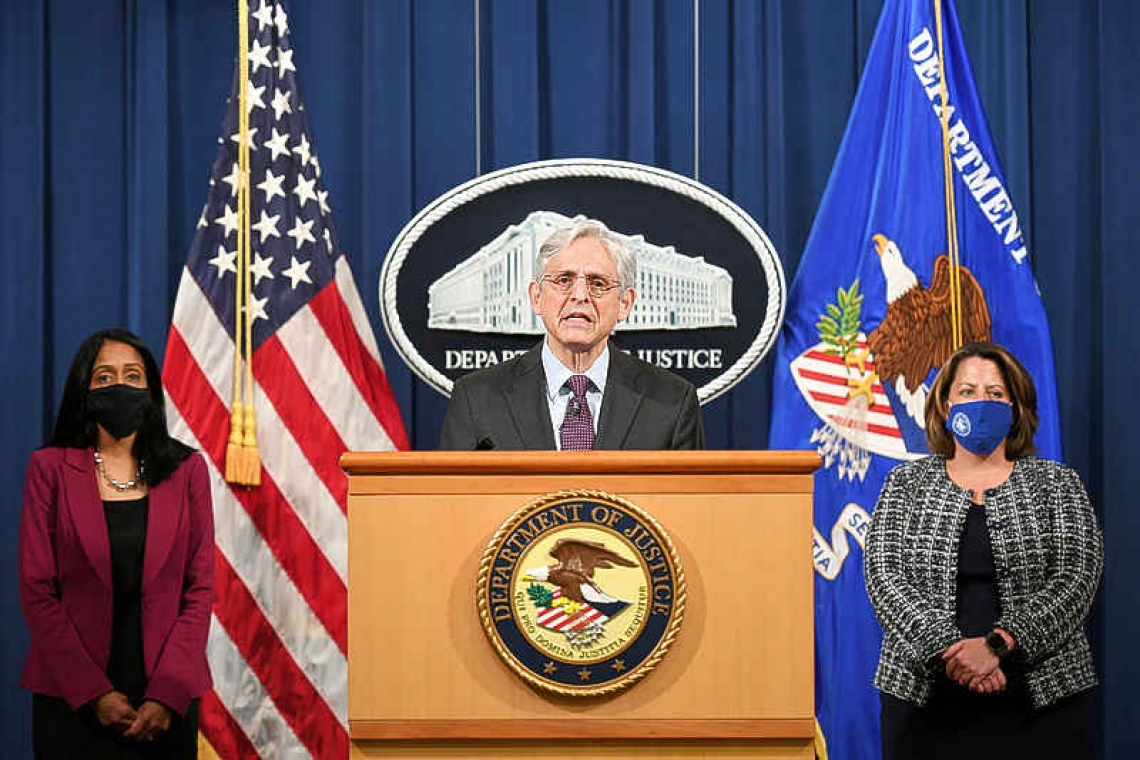 WASHINGTON--President Joe Biden's Justice Department aimed to shield the presidency, not Donald Trump, with its latest action in a defamation case brought by a woman who accuses the former president of raping her, legal experts said.

It was one of two cases in recent weeks in which the administration took a stance shielding the Republican Trump or those who served in his administration, angering liberals in Biden's own Democratic Party.
On Monday the Justice Department under Attorney General Merrick Garland urged a court to substitute the U.S. government as the defendant in the lawsuit brought by E. Jean Carroll, a writer who accuses Trump of raping her a quarter century ago and defaming her by denying it while he was president. That followed the department's decision last month to appeal a court decision faulting former Attorney General William Barr's handling of the 2019 special counsel report on Trump.
Andrew Wright, a lawyer at K&L Gates who worked on Biden's presidential transition, said in both cases "DOJ is not trying to save Trump, but protect a strong presidency and executive branch."
Other legal experts agreed the Justice Department's actions aimed to protect the office rather than the personal interests of the man holding it, an accusation it faced during the Trump administration. "Everyone is upset about the facts of this case, which is understandable, but Garland has to think about the precedent he is setting for everyone," Randall Eliason, a former federal prosecutor who now teaches at the George Washington University Law School, said of the Carroll case.
Carroll's lawsuit alleges Trump defamed her when he called her a liar and said he could not have raped her because she was not his type. If the department succeeds in the case, it will likely doom her lawsuit because the government cannot be sued for defamation.
The Justice Department's brief said Trump's comments were crude and Carroll's accusations were serious, but maintained Trump had immunity from the lawsuit because he was acting within the scope of his job when he made the remarks.
The move drew immediate criticism from some former prosecutors, who said on Twitter they disagreed with the legal analysis and were disappointed to see the department shield Trump. "Really at a loss to see how ugly comments about a woman who alleged Trump raped her decades before he became president were made 'within the scope of his employment,'" tweeted Joyce Alene, a former U.S. Attorney in Alabama. "Also at a loss to figure out why my tax $ should be used for Trump's defense."
Two weeks earlier, the department disappointed some Democrats in Congress by appealing a court decision faulting Barr’s handling of Special Counsel Robert Mueller's 2019 report on whether Trump engaged in obstruction of justice. A group of Senate Democrats had urged Garland not to appeal the decision, saying in a letter that Barr's actions needed to be exposed.
Both legal moves have drawn criticism from lawyers, including former Justice Department attorneys, who saw Barr as too eager to protect Trump. "DOJ took certain positions during the Trump/Barr Administration that seemed antithetical to principles of equal justice under law, and many hoped that those positions would be abandoned," said Harry Sandick, a former federal prosecutor now in private practice in New York. "With this decision, and the decision to appeal the decision on the Mueller report, it appears that DOJ will defend many of those positions."
But Bradley Moss, a national security lawyer in Washington who has litigated against both the Trump and Biden administrations, said the two cases showed the department operating in an apolitical way. Moss said Garland deserves credit for reversing course in other legal fights, noting that in February the Justice Department voluntarily dropped a lawsuit accusing a former aide to Trump's wife, Melania Trump, of violating a White House nondisclosure agreement by publishing a tell-all memoir about the former first lady.
"What we are seeing here is the department making decisions in these cases the way it is supposed to be done: based on the law and merit, and not based on personal grievances," Moss said.