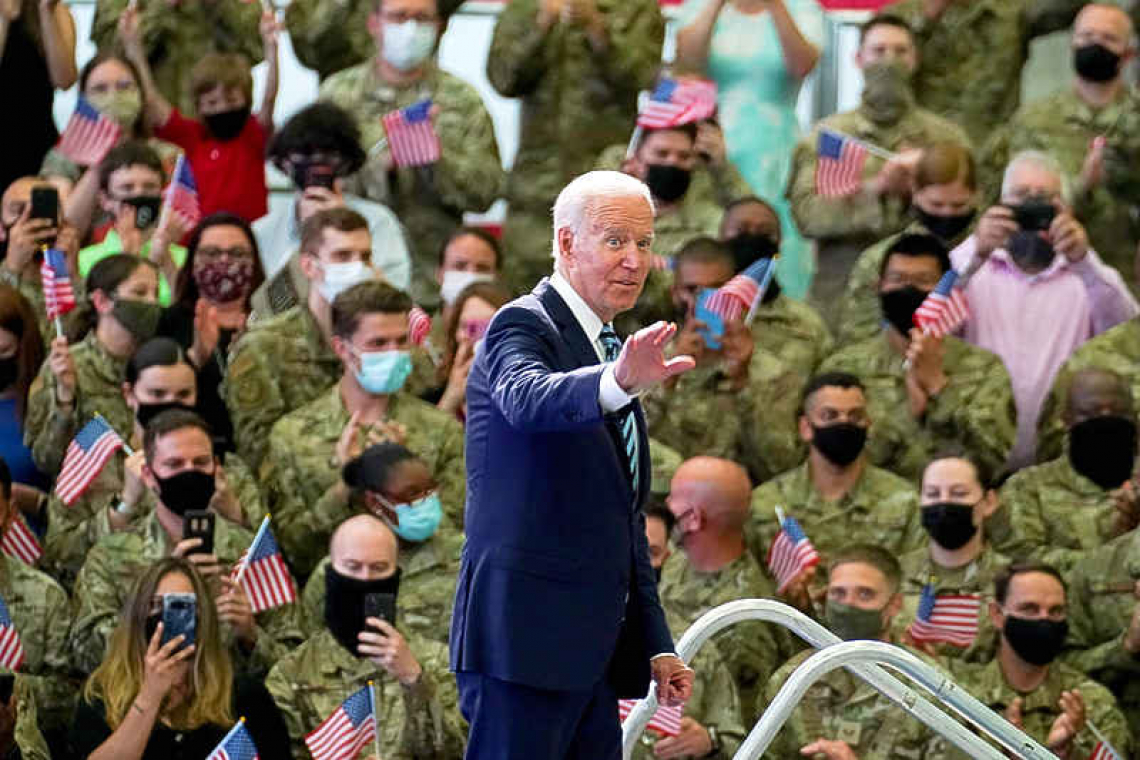 MILDENHALL, England--President Joe Biden on Wednesday began his first trip abroad since taking office by hailing America's unwavering commitment to the NATO alliance and warning Russia it faced "robust and meaningful" consequences if it engaged in harmful activities.

Biden, speaking to about 1,000 troops and their families at a British air base, said he would deliver a clear message to Russian President Vladimir Putin when they meet next week after separate summits with NATO, G7 and European leaders.
"We're not seeking conflict with Russia," the Democratic president said at the start of his eight-day visit to Europe. "We want a stable and predictable relationship ... but I've been clear: The United States will respond in a robust and meaningful way if the Russian government engages in harmful activities."
Biden has said he is determined to rebuild trans-Atlantic ties and reframe relations with Russia after four rocky years under Republican former President Donald Trump, whose tariffs and withdrawal from treaties strained relations with major allies.
"This is my first overseas trip as president of the United States. I'm heading to the G7, then the NATO ministerial and then to meet with Mr. Putin to let him know what I want him to know," Biden said, drawing cheers from the troops. "At every point along the way, we're going to make it clear that the United States is back and democracies of the world are standing together to tackle the toughest challenges, and the issues that matter most to our future."
Biden told reporters as he left for Europe that his goals were "strengthening the alliance, making it clear to Putin and to China that Europe and the United States are tight."
His summit with Putin on June 16 in Geneva is the capstone of the trip, an opportunity to raise U.S. concerns directly with the Russian leader about ransomware attacks emanating from Russia, Moscow's aggression against Ukraine and a host of other issues. In a development further straining U.S.-Russia ties, a Russian court on Wednesday outlawed groups linked to jailed Kremlin critic Alexei Navalny, after declaring them "extremist." Condemning the decision, the U.S. State Department said it "effectively criminalized one of the country’s few remaining independent political movements."
Speaking to U.S. troops based at Royal Air Force Mildenhall base, a huge American flag behind him, Biden underscored the U.S. commitment to the NATO alliance but said it needed to modernize and expand its cyber capabilities.
Biden also comes to Europe with a goodwill gesture, the planned announcement that the United States will buy and donate 500 million Pfizer Inc/BioNTech coronavirus vaccine doses to about 100 countries over the next two years, three sources familiar with the matter told Reuters. Biden is expected to announce the deal on Thursday. The United States has faced criticism over securing access to much of the initial stockpile of the most promising vaccines.
Biden will make his first stop of the trip at the seaside village of St. Ives in Cornwall where he will participate in the G7 summit. The meeting is expected to be dominated by vaccine diplomacy, trade, climate and an initiative for rebuilding infrastructure in the developing world. U.S. officials see that effort as a way to counter China's growing influence.