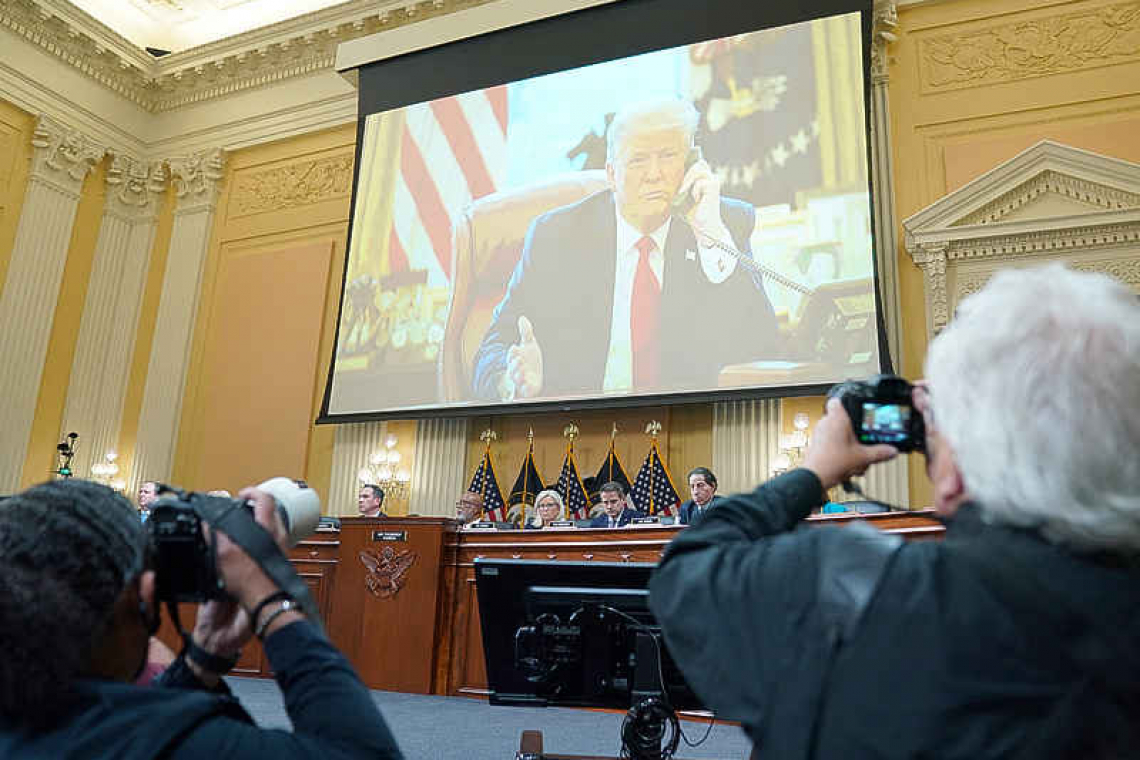 WASHINGTON--Former President Donald Trump pressured his vice president, Mike Pence, to overturn his 2020 election defeat despite being told repeatedly it was illegal to do so, aides to Pence told the congressional committee investigating the Jan. 6, 2021, attack on the U.S. Capitol on Thursday.

Members of the Democratic-led House of Representatives select committee said Trump continued his pressure campaign even though he knew a violent mob of his supporters was threatening the Capitol as Pence and lawmakers met to formally certify President Joe Biden's victory in the November 2020 election.
The nine-member committee has used the first three of at least six public hearings this month to build a case that Trump's efforts to overturn his defeat amounted to illegal conduct, far beyond normal politics. Trump has repeatedly denied wrongdoing, while repeating his false accusations that he lost the election only because of widespread fraud that benefited Democrat Biden. Trump and his supporters - including many Republican members of Congress - dismiss the Jan. 6 panel as a political witchhunt.
The certification vote on Jan. 6 had become a focus for Trump, who saw it as a last-ditch chance to retain the presidency despite his loss at the polls. Marc Short, who was Pence's chief of staff, said in videotaped testimony that Pence told Trump "many times" that he did not have the authority to stop the vote certification in Congress as the Republican president sought.
Gregory Jacob, an attorney for Pence, said the main proponent of that theory, attorney John Eastman, admitted in front of the president two days before the attack that his plan to have Pence halt the procedure would violate the law. Eastman had argued that Pence could reject results from certain states if he thought they were illegitimate, giving Republicans in those states an opportunity to declare Trump the victor despite the actual vote count.
Advisers to Pence told the committee that idea had no basis in law. "It is breathtaking that these arguments even were conceived, let alone entertained by the president of the United States," former U.S. Appeals Court Judge J. Michael Luttig, an informal Pence adviser, said.
Trump is widely expected to run for president again in 2024, and committee members and witnesses warned that he would not accept defeat no matter the actual outcome. "Today almost two years after that fateful day in January 2021, that still, Donald Trump and his allies and supporters are a clear and present danger to American democracy," Luttig said.
The committee showed an email Eastman sent to Trump's attorney, former New York Mayor Rudy Giuliani, asking for a presidential pardon. Eastman never received one.
The hearing featured several chilling clips of some of the thousands of Trump supporters who descended on the Capitol after a rally in which Trump repeatedly criticized Pence, chanting for Pence to be pulled out of the building or hanged. Trump tweeted at 2:24 p.m., while the attack was going on, that Pence did not have the "courage" to stop the count.
"It felt like he was pouring gasoline on the fire by tweeting that," Sarah Matthews, a Trump White House staffer, said in video testimony.
Representative Pete Aguilar said a witness had told the Federal Bureau of Investigation that the Proud Boys, one of the right-wing groups participating in the Capitol attack, said the group would have killed Pence if they been able to get to him.
Committee members said Trump's comments against Pence incited the crowd. The committee displayed photos of Pence sheltering in place during the riot. Jacob, who was with Pence during the attack, said he refused to leave and that he did not want to give the demonstrators the satisfaction of forcing him from the building. "The vice president did not want to take any chance that the world would see the vice president of the United States fleeing the U.S. Capitol," he said.
The attack on the Capitol delayed certification of the election for hours, injured more than 140 police officers and led to several deaths. Even after police had suppressed the attack and reclaimed the Capitol, Eastman continued to press Pence's team to overturn the vote.
"I implore you one last time, can the Vice President, please do what we've been asking him to do these last two days - suspend the Joint Session, send it back to the States," Eastman wrote to Jacob at 11:44 p.m. in an email released by the committee.