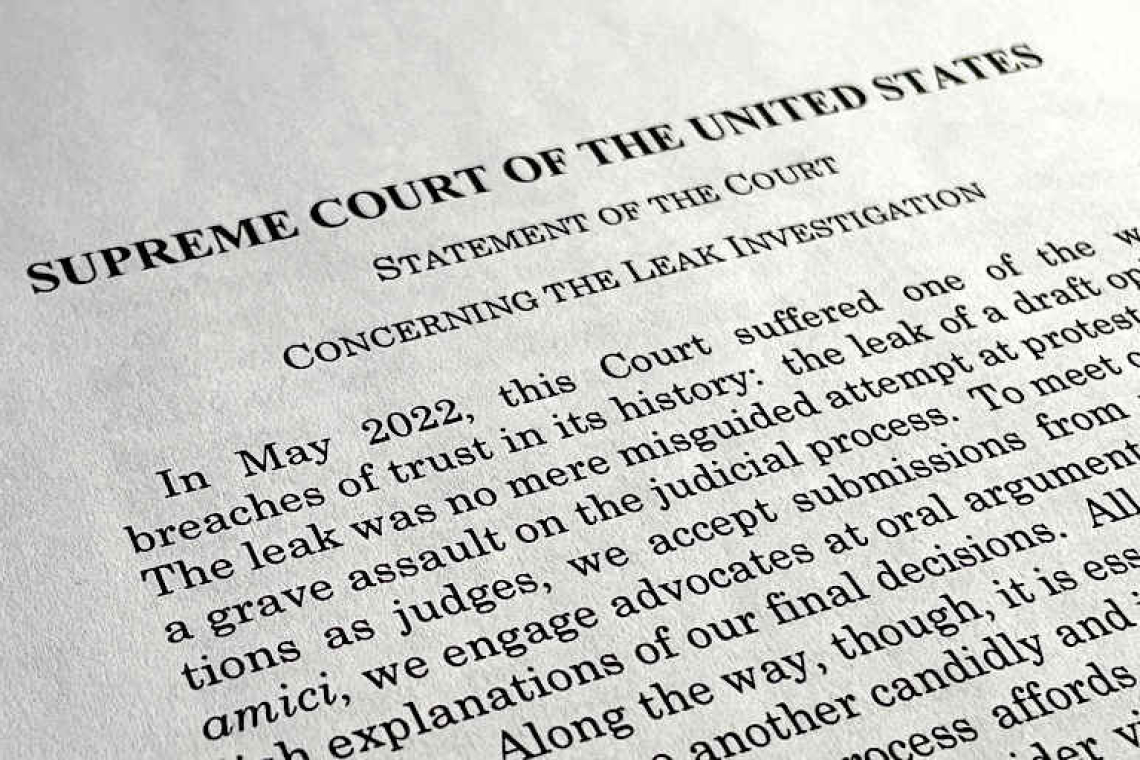 WASHINGTON--The U.S. Supreme Court after an eight-month investigation failed on Thursday to identify who leaked a draft of its blockbuster ruling overturning the 1973 Roe v. Wade decision that had legalized abortion nationwide though the probe revealed multiple holes in security measures at America's top judicial body.

The leak - with the news outlet Politico publishing the draft ruling on May 2 - prompted an internal crisis at the court, ignited a political firestorm and prompted rallies by abortion rights supporters at the courthouse, outside the homes of some of the nine justices and around the country.
The investigation, detailed in a 20-page report, found that 82 court employees, plus the justices, had access to electronic or hard copies of the draft opinion authored by conservative Justice Samuel Alito, which was only marginally different than the final decision issued on June 24. The probe, headed by the court's chief security officer Gail Curley at the direction of Chief Justice John Roberts, did not identify a source of the leak, noting that none of the 97 court employees interviewed confessed to the disclosure. The report did not make clear whether the justices were interviewed in the inquiry.
Some employees admitted they spoke to their spouses or partners about the draft opinion and how the justices voted, a breach of the court's confidentiality rules, the report found. The leak represented an unprecedented violation of the court's tradition of confidentiality in the behind-the-scenes process of making rulings after hearing oral arguments in cases.
The report was critical of some of the court's internal security protocols. After examining court computer devices, networks, printers and available call and text logs, investigators found no forensic evidence identifying the leaker, the report said. The report faulted the court for maintaining systems based on trust with few safeguards to limit access to sensitive information.
"The pandemic and resulting expansion of the ability to work from home, as well as gaps in the court's security policies, created an environment where it was too easy to remove sensitive information from the building and the court's IT (information technology) networks, increasing the risk of both deliberate and accidental disclosures of court sensitive information," the report said.
The inquiry will continue to follow any new leads to identify the culprit, the report said. Investigators found "nothing to substantiate" the flurry of speculation on social media after the leak that a specific individual or law clerk was the leaker, it added.
The report recommended that regardless of whether the leaker is identified, the court should "create and implement better policies to govern the handling of court-sensitive information and determine the best IT systems for security and collaboration."
The investigation was conducted at a time of increased scrutiny of the court and concerns about an erosion of its legitimacy. Only 43% of Americans have a favorable view of the court, according to a Reuters/Ipsos poll conducted Jan. 13-15, down from 50% last May.
A "statement of the court" accompanying the report called the disclosure one of the worst breaches of trust in its history. "The leak was no mere misguided attempt at protest. It was a grave assault on the judicial process," the statement said.
Roberts and the court faced criticism for failing to solve the mystery. "So the Supreme Court is arbitrarily looking through law clerks' Google history, downloading their phone data and fingerprinting a few of them? And even with these intrusions, they essentially have nothing to report? My question is how closely were the justices themselves scrutinized for being the possible culprit of the leak?" asked Gabe Roth, who heads the group Fix the Court that advocates for reform at the court.