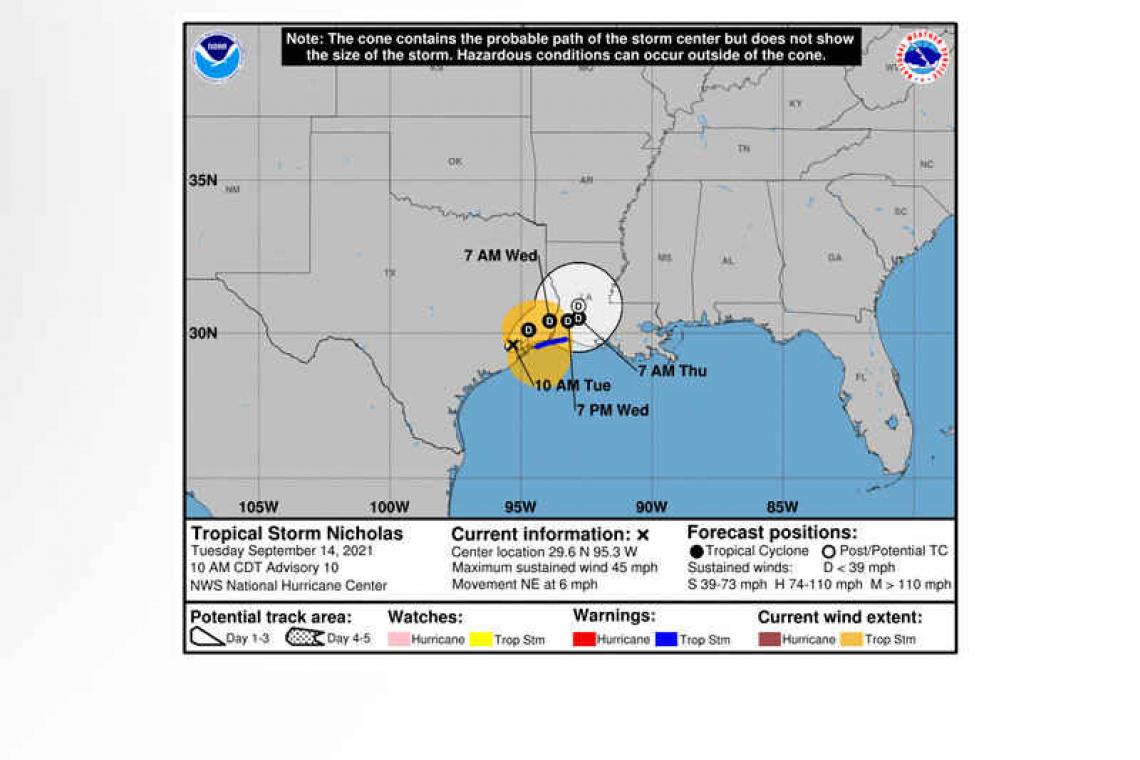 ...LIFE-THREATENING FLASH FLOODS EXPECTED ACROSS PORTIONS OF THE DEEP SOUTH DURING THE NEXT COUPLE OF DAYS... 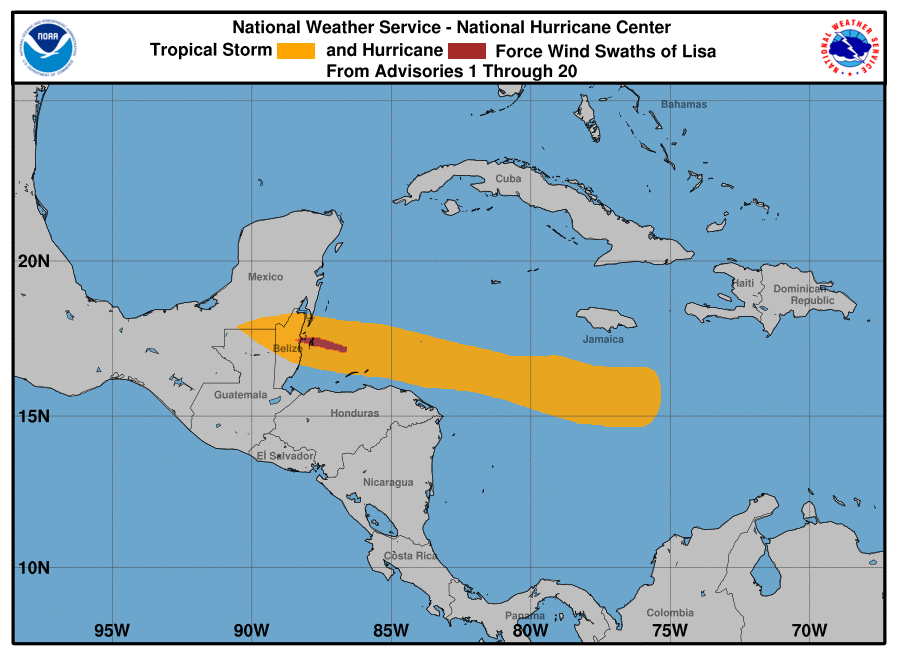 The Tropical Storm Warning has been discontinued west of High Island, Texas.

The Storm Surge Warning has been discontinued south of Port Bolivar, Texas.

The Storm Surge Watch has been discontinued east of Cameron, Louisiana.

A Storm Surge Watch is in effect for...

A Storm Surge Warning means there is a danger of life-threatening inundation, from rising water moving inland from the coastline. This is a life-threatening situation. Persons located within these areas should take all necessary actions to protect life and property from rising water and the potential for other dangerous conditions. Promptly follow evacuation and other instructions from local officials.

A Storm Surge Watch means there is a possibility of life-threatening inundation, from rising water moving inland from the coastline.

At 1000 AM CDT (1500 UTC), the center of Tropical Storm Nicholas was located near latitude 29.6 North, longitude 95.3 West. Nicholas is moving toward the northeast near 6 mph (9 km/h) and this general motion should continue today. The storm should move more slowly toward the east-northeast by tonight, and then turn eastward on Wednesday over Louisiana. Little motion is anticipated on Thursday.

NOAA Doppler weather radar and surface observations indicate that maximum sustained winds have decreased to near 45 mph (75 km/h) with higher gusts. Additional weakening is forecast during the next couple of days as Nicholas moves farther inland, and the storm is forecast to become a tropical depression by tonight.

Tropical-storm-force winds extend outward up to 140 miles (220 km), mainly over water to the southeast of the center. A TCOON observing station at Texas Point, Sabine Pass, Texas, recently measured a 1-minute sustained wind of 40 mph (65 km/h) and a gust to 51 mph (81 km/h).

The estimated minimum central pressure is 1002 mb (29.59 inches) based on nearby surface observations. 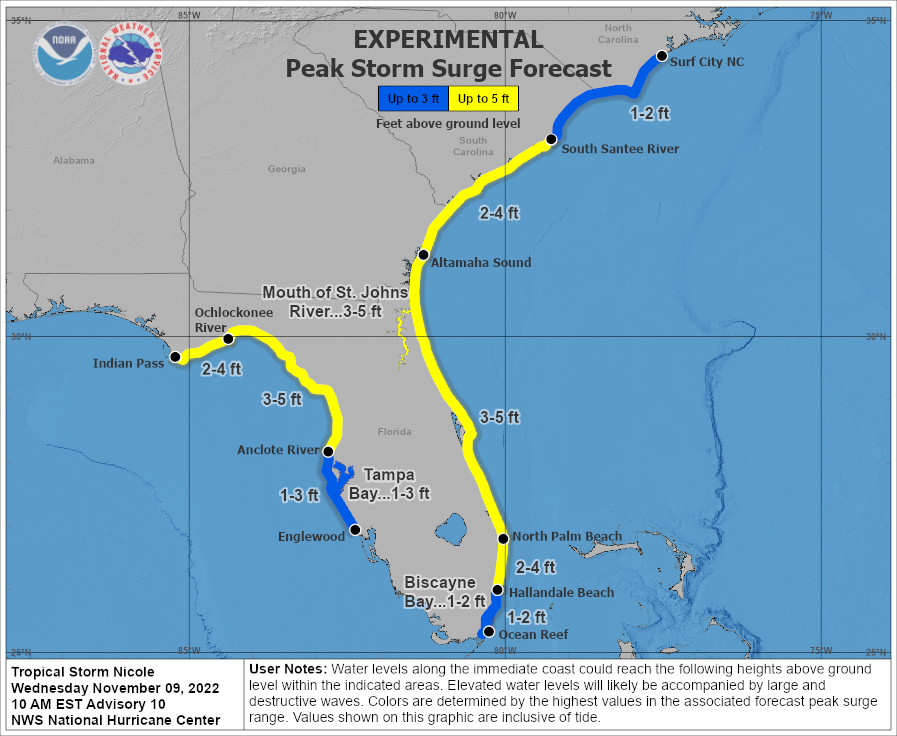 RAINFALL: Nicholas is expected to produce additional rainfall of 5 to 10 inches from the upper Texas coastal area into central to southern Louisiana, far southern Mississippi, far southern Alabama and the western Florida Panhandle through Thursday, with isolated storm totals of 20 inches across southern Louisiana. Life-threatening flash flooding impacts, especially in urbanized metropolitan areas, are possible across these regions.

Widespread minor to isolated major river flooding is expected across portions of the upper Texas Gulf Coast and southern Louisiana and Mississippi.

STORM SURGE: The combination of a dangerous storm surge and the tide will cause normally dry areas near the coast to be flooded by rising waters moving inland from the shoreline. The water could reach the following heights above ground somewhere in the indicated areas if the peak surge occurs at the time of high tide...

The deepest water will occur along the immediate coast in areas of onshore winds, where the surge will be accompanied by large and dangerous waves. Surge-related flooding depends on the relative timing of the surge and the tidal cycle, and can vary greatly over short distances. For information specific to your area, please see products issued by your local National Weather Service forecast office.

TORNADOES: A tornado or two will be possible today into tonight across southern Louisiana.

SURF: Swells generated by Nicholas will continue affecting portions of the northwest Gulf coast today. These swells are likely to cause life-threatening surf and rip current conditions. Please consult products from your local weather office.