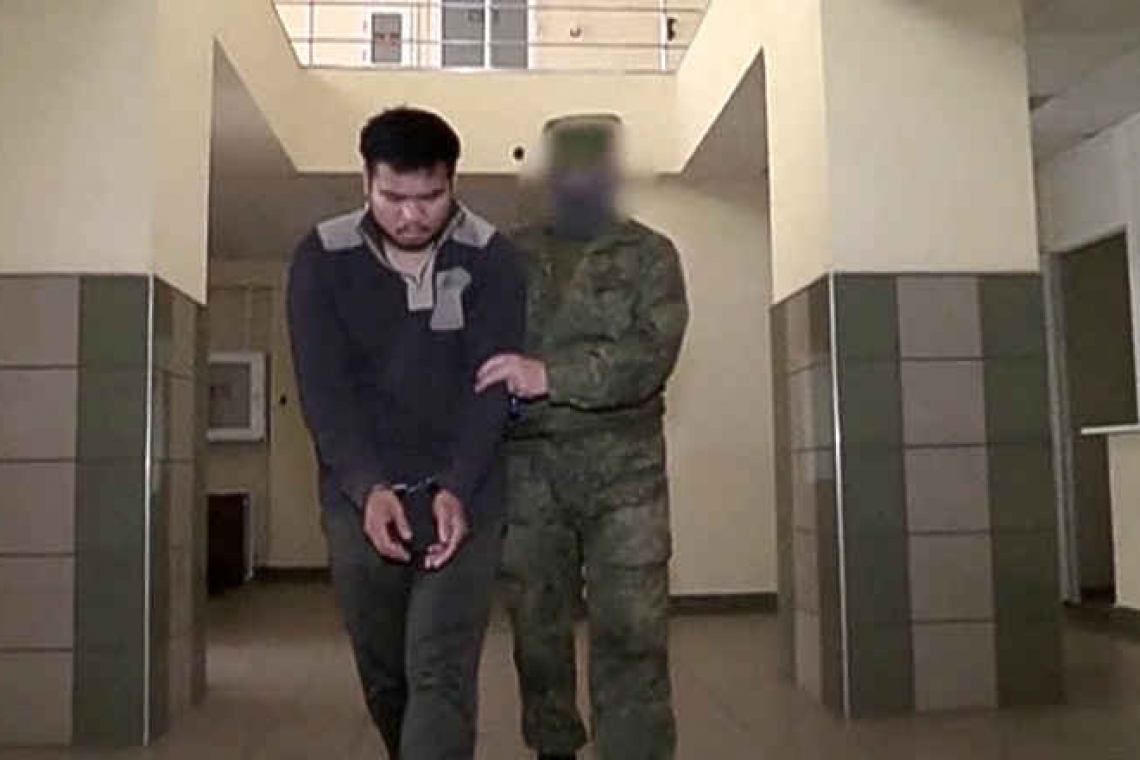 A still image taken from Russian state TV footage that it said shows Andy Huynh, a U.S. citizen captured by Russian forces while fighting for Ukraine, at an unknown location, in a still image from a video released on June 17, 2022. (RU-RTR/Handout via ReutersTV)

MOSCOW--Two Americans detained in Ukraine while fighting on the Ukrainian side of the war were mercenaries who endangered the lives of Russian servicemen and should face responsibility for their actions, the Kremlin said on Monday.

Kremlin spokesman Dmitry Peskov, interviewed by the U.S. television network NBC news, also said U.S. basketball star Brittney Griner, held in Russia for more than two months, was guilty of drug offences and not a hostage.
Peskov's comments were the first formal acknowledgment that the two men, identified in U.S. reports as Andy Huynh, 27, of Hartselle, Alabama, and Alexander Drueke, 39, of Tuscaloosa, Alabama, were being held and under investigation.
"They are soldiers of fortune. They were involved in illegal activities on the territory of Ukraine. They were involved in firing at and shelling of our military personnel. They were endangering their lives," Peskov said. "And they should be held responsible for those crimes they have committed. Those crimes have to be investigated...The only thing that is clear is that they have committed crimes. They are not in the Ukrainian army. They are not subject to the Geneva convention."
Family members said last week the two men went to Ukraine as volunteer fighters and had gone missing. Russian media last week broadcast images of them captured while fighting for Ukraine. Peskov would not reveal where the men were held.
Two Britons and a Moroccan have already been sentenced by a court under the jurisdiction of separatists in Donetsk on grounds that they were mercenaries and not subject to the Geneva Convention governing prisoners of war. Kyiv condemned the court ruling as having no authority and said the fighters were members of the Ukrainian armed forces, and thus subject to Geneva Convention protections.
Moscow calls its actions a "special military operation" to disarm Ukraine and protect it from fascists. Ukraine and its allies in the West say the fascist allegation is baseless and the war is an unprovoked act of aggression.
Peskov said Griner, who had come to promote basketball in Russia, was being prosecuted under laws forbidding the import of drugs. "Russia is not the sole country in the world to have quite strict laws in that sense...it is prosecuted by law. We can do nothing about that," Peskov told NBC.
He "strongly disagreed" with any notion that Griner, who arrived in Russia in February, was being held hostage. "We cannot call her a hostage. Why should we call her a hostage?" he said. "She violated Russian law and now she is being prosecuted. It not about being a hostage."
Russian customs officials say vape cartridges containing hashish oil were found in Griner's luggage.
The U.S. State Department determined in May that Griner was wrongfully detained and assigned diplomats to work for her release. Her wife, Cherelle Griner, has said she is a political pawn.