In tribute to King, Biden invokes 'battle for the soul of this nation' 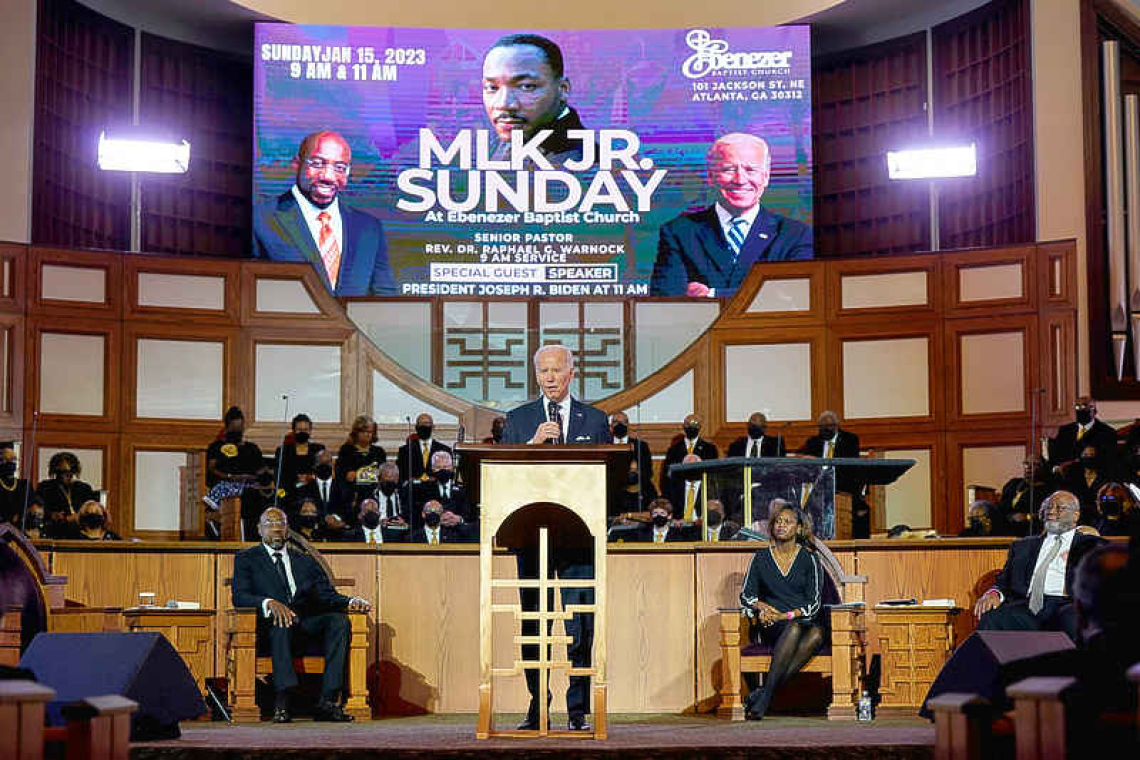 ATLANTA, Georgia--President Joe Biden told Americans to look towards Martin Luther King Jr.'s life for lessons on repairing their divisions, extremism and injustice, as he became the first sitting U.S. president to speak at a Sunday service in the civil rights leader's church in Atlanta.

Marking Monday's national holiday celebrating King, Biden delivered a sermon at Ebenezer Baptist Church at the invitation of its pastor, Democratic U.S. Senator Raphael Warnock, centered on a common theme - the country and the world are battling against autocratic forces.
"The fact is that I stand here at a critical juncture for the United States and the world in my view," Biden said, calling it a "time of choosing."
"Are we a people who will choose democracy over autocracy," Biden asked. "We have to choose a community over chaos. Are we the people going to choose love over hate? These are the questions of our time and the reason I am here."
King worked for voting rights, Biden said, but "we do well to remember that his mission was even deeper. It was spiritual. It was moral."
King often asked 'Where do we go from here?' Biden said. "My message to the nation on this day is we go forward. We go together."
Sunday would have been King's 94th birthday. He was assassinated at age 39 in 1968 in Memphis, Tennessee, by avowed segregationist James Earl Ray. King was pastor of Ebenezer church from 1960 until his death.
"The battle for the soul of this nation is perennial," Biden said in his tribute to King. "It's a constant struggle between hope and fear, kindness and cruelty, justice and injustice."
Many presidents, including Biden, have visited Ebenezer to honour King, usually during events around the time of his birthday. But Biden was the first to speak from the pulpit at a regular Sunday service.
King "reminds us that we are tied in a single garment of destiny, that this is not about Democrat and Republican, red, yellow, brown, black and white," Warnock said earlier on Sunday.
On Monday Biden will meet with civil rights advocate Al Sharpton in Washington, and speak to his group, the National Action Network.
Biden is expected to announce his re-election bid in the weeks ahead. Biden was elected in 2020 with strong support from Black voters after pledging to do more to expand voting rights and address other racial justice issues. But some activist groups boycotted his 2022 speech honoring King, disappointed by what they see as his lack of action.