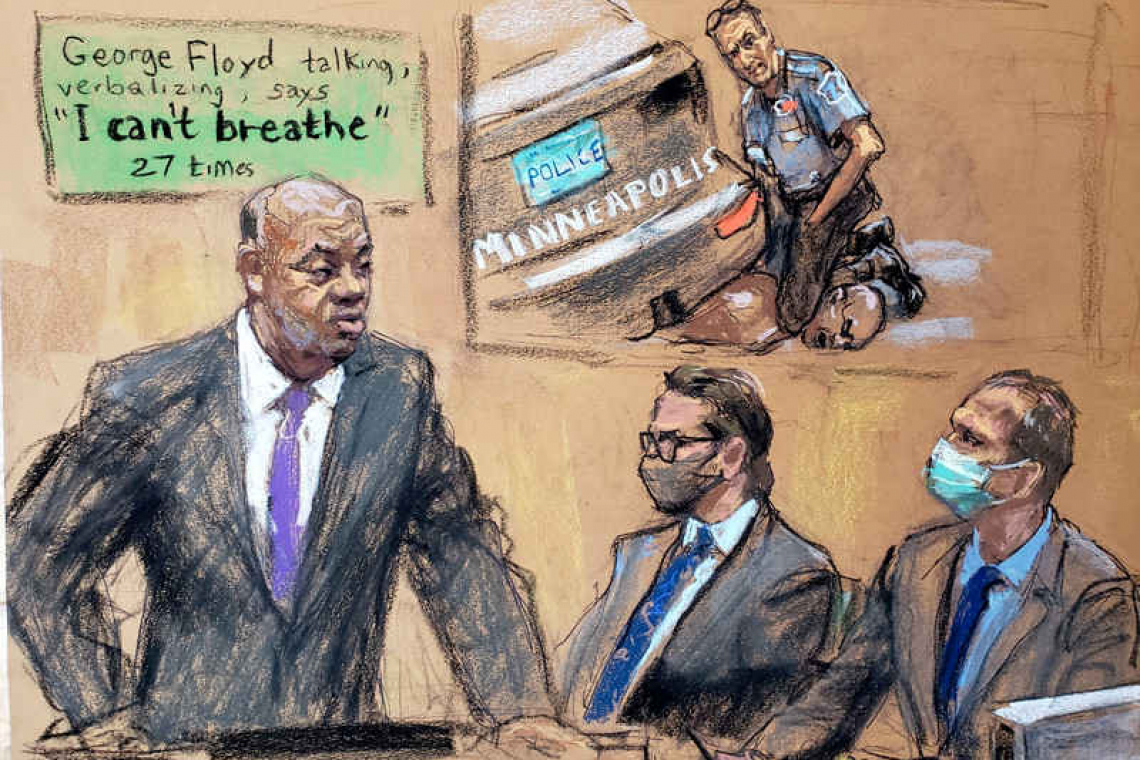 MINNEAPOLIS--Former Minneapolis policeman Derek Chauvin betrayed his badge by "grinding" his knee into George Floyd's neck during a deadly arrest last May, a prosecutor said on Monday at a murder trial that is widely seen as a test of the U.S. justice system.

Chauvin's lawyers responded by saying that the former officer was simply following training from his 19 years on the force, even as they acknowledged that the arrest, caught in videos from multiple angles, was distressing to watch.
"The use of force is not attractive but it is a necessary component of policing," Eric Nelson, Chauvin's lead lawyer, said in his opening statement, referring to the videos that show Floyd, a 46-year-old handcuffed Black man, pleading for his life. The footage sparked worldwide protests against police brutality against Black people.
But in his opening arguments, Jerry Blackwell, a prosecutor with the Minnesota Attorney General's Office, told the racially diverse jury that officers who wear the Minneapolis police badge pledge never to use "unnecessary force or violence."
"You will learn that on May 25, Mr. Derek Chauvin betrayed this badge when he used excessive and unreasonable force upon the body of George Floyd," said Blackwell, aiming for a rare conviction of a U.S. police officer for killing a civilian.
Blackwell displayed a still image from a bystander's cellphone video showing Chauvin, who is white, with his knee on Floyd's neck, saying it showed Chauvin "grinding and crushing him until the very breath — no, ladies and gentlemen — the very life was squeezed out of him."
Chauvin and three other officers were trying to arrest Floyd on suspicion of using a counterfeit $20 bill to buy cigarettes, a misdemeanor that prosecutors said could have been handled with a summons to appear in court instead of an arrest.
Chauvin, 45, has pleaded not guilty to second-degree murder, third-degree murder and second-degree manslaughter. He faces up to 40 years in prison if convicted on the most serious charge.
The Minneapolis Police Department fired all four officers the day after Floyd's death, as daily protests against racial injustice erupted in cities across the country. Although the trial, which is being televised, is widely seen as a litmus test for U.S. racial relations, neither side discussed the race of the defendant or the victim in the statements to the jury.
Even so, the subtext of the trial was inescapable in the preceding two weeks of jury selection, where potential jurors were quizzed by the two sides on their views on the Black Lives Matter protest movement and whether they saw systemic racism in the criminal justice system. The trial is unfolding in a courtroom located near the top floor of a tower in downtown Minneapolis ringed with high barriers, barbed wire and soldiers from the state's National Guard. Small groups of protesters decrying police brutality blocked traffic at times in the surrounding streets.
Toward the end of his opening statement, Blackwell played for the jury the most widely seen video of Floyd's death. Chauvin — dressed in a gray suit, a blue face mask and a blue shirt and tie — took pages of notes on a yellow legal pad as the sound of Floyd's dying moans and the yelling of horrified onlookers filled the courtroom.
Chauvin's lawyers argue that the main cause of Floyd's death, which the county examiner ruled a homicide caused by police restraints, was a drug overdose. Nelson used his 25-minute opening statement to describe Floyd's drug use, his underlying health problems and a chaotic scene during the arrest.
"This was not an easy struggle," he said, adding that the screaming of bystanders ended up "causing the officers to divert their attention from the care of Mr. Floyd."
"Derek Chauvin did exactly what he was trained to do over the course of his 19-year career," Nelson told the jury.
Prosecutors warned the jury to ignore defense arguments that Floyd's death was caused by an opioid overdose. Blackwell drooped his head and shut his eyes, feigning a stupor, telling the jury that someone overdosing on fentanyl would be unconscious, and not "screaming for their mother."
"That's not what an opioid overdose looks like," he said.
The first witness called by the prosecutors was Jena Scurry, a Minneapolis 911 emergency dispatcher who sent police to the Cup Foods store and watched live surveillance video footage showing a police car rock back and forth outside the store as four officers struggled to get Floyd to stay in the back seat. She said she watched the video, which was played to jurors, with growing alarm.
"I first asked if the screen had frozen," she said. Each time she looked up, she testified, the officers were still on top of Floyd.
"My instinct is telling me something is wrong," said Scurry, who called a supervising police sergeant. Jurors heard her say she did not mean to be a "snitch" but she wondered if the officers needed more help.
Prosecutors also called two bystanders who saw the arrest. "I always see the police there," Alisha Oyler, who worked in the gas station across from the arrest, said when asked why she kept taking video on her cellphone. "They're always messing with people and it's wrong. It's not right."