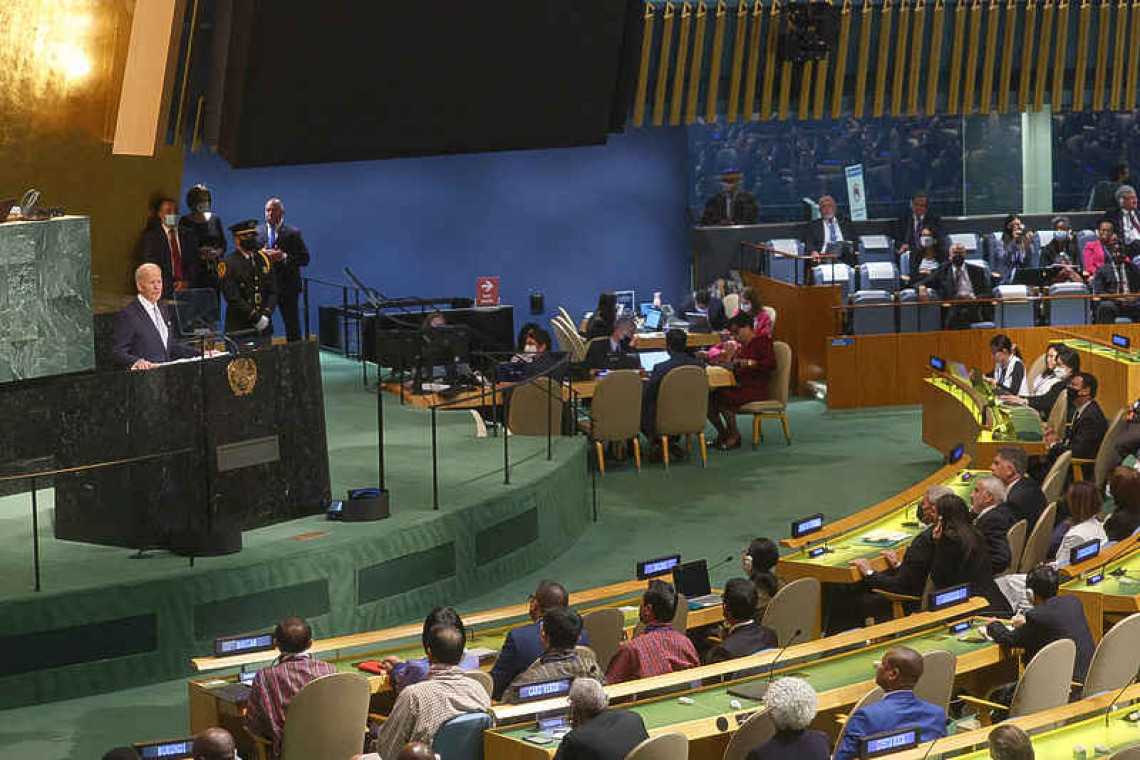 Speaking at the United Nations General Assembly in New York, Biden slammed Russian President Vladimir Putin for starting an unprovoked war that some 40 U.N. members were helping Ukraine to fight by providing funding and weapons.
Earlier on Wednesday, Putin ordered a Russian mobilization to fight in Ukraine and made a thinly veiled threat to use nuclear weapons, in what NATO called a "reckless" act of desperation in the face of a looming Russian defeat. Biden echoed the NATO statement.
"Again, just today, President Putin has made overt nuclear threats against Europe, in a reckless disregard for the responsibilities of the nonproliferation regime," Biden said.
"A nuclear war cannot be won and must never be fought," he said.
Biden said no one had threatened Russia, despite its claims to the contrary, and that only Russia had sought conflict, and he used the U.N. setting to underscore his view that Moscow had violated the body's values.
"A permanent member of the United Nations Security Council invaded its neighbour, attempted to erase a sovereign state from the map. Russia has shamelessly violated the core tenets of the United Nations Charter," Biden said. "This war is about extinguishing Ukraine's right to exist as a state, plain and simple, and Ukraine's right to exist as a people. Wherever you are, wherever you live, whatever you believe, that should ... make your blood run cold."
Russia's mission to the United Nations did not immediately respond to a request for comment on Biden's remarks. While Russian Foreign Minister Sergei Lavrov was in New York for the U.N. gathering, a deputy Russian U.N. ambassador was in the chamber for Biden's speech.
Later on Wednesday, a senior White House official told reporters Putin's announcement "indicates a very pressurized environment in Russia" but said it was too soon to tell how serious anti-mobilization protests in Russia are. Putin has been forced to "resort to something he clearly didn’t want to do," the official said, "a reflection of the fact that his campaign in Ukraine is failing."
The United States and Western allies are competing with Russia for diplomatic influence. The United States has acknowledged that some countries are concerned the Ukraine war had drawn global attention away from other crises.
Washington has also long been vying for sway with Beijing. "Let me be direct about the competition between the United States and China. As we manage shifting geopolitical trends, the United States will conduct itself as a reasonable leader," Biden said.
"We do not seek conflict. We do not seek a Cold War. We do not ask any nation to choose between the United States or any other partner," he said.
Biden also called out China for suspending bilateral cooperation with the United States on climate talks after U.S. House of Representatives Speaker Nancy Pelosi's Aug. 2-3 visit to Taiwan. "The United States will work with every nation, including our competitors, to solve global problems like climate change. Climate diplomacy is not a favour to the United States or any other nation and walking away hurts the entire world," he said.
Biden announced $2.9 billion in additional U.S. funding to combat global food insecurity, building on $6.9 billion in U.S. funding already committed this year. The United States has strengthened its focus on food supplies since Russia's Feb. 24 invasion of Ukraine worsened a global crisis that was already fueled by climate change and the COVID-19 pandemic. Russia and Ukraine are major grain and fertilizer exporters and shipments were disrupted by the war.
Biden pushed back against Russian complaints that Western sanctions are harming its exports, stressing that U.S. sanctions explicitly allow Russia to export food and fertilizer and that it was "Russia's war that is worsening food insecurity."
He also urged countries not to hoard grain while so many people are suffering: "In every country in the world, no matter what else divides us, if parents cannot feed their children, nothing, nothing else matters."
The United States has accused China of stockpiling grain. China's grain stocks at the end of the 2021/22 season were estimated by the International Grains Council to be 323.5 million tonnes, more than half the global total of 602.9 million. They dwarf those of the United States, the world's top grain exporter, which were estimated at 57.5 million tonnes.