Teresa Leslie’s book about racism on Statia: A review by Clarisse Buma 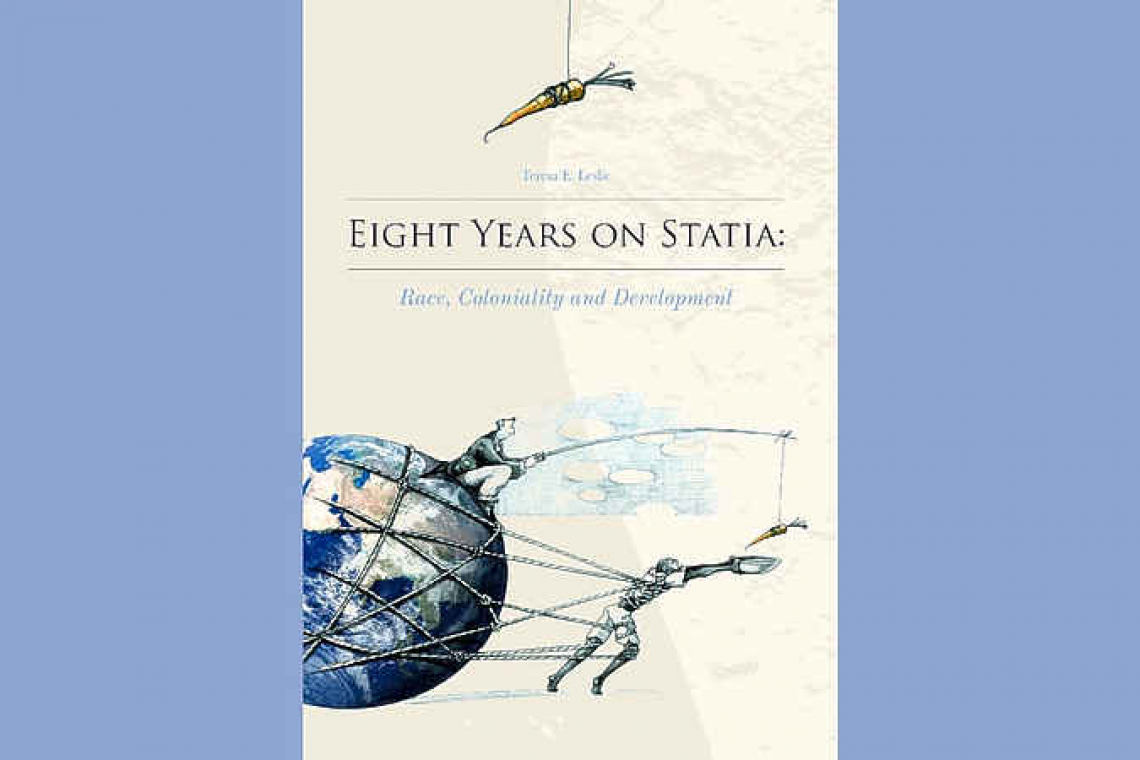 For eight years, the American anthropologist, Dr. Teresa Leslie, worked on St. Eustatius, living in the home of her paternal grandparents, who had emigrated to the US in the early 20th century. This all led Dr. Leslie to write a remarkable book, Eight years on Statia. Race, Coloniality and Development. It is remarkable for the impressive way it tackles the subject of racism.

Sint Eustatius, also known as Statia, is a small, quiet Caribbean island. It is a special municipality of the Netherlands and forms part of the archipelago of the Windward Islands. The population is mainly black. There is a lot of poverty, shortage of drinking water, poor roads and a lack of hope. It is certainly not paradise as you might imagine, based on the holiday brochures about the Caribbean.

Written in an accessible way, Leslie proposes that the island’s society is still permeated with racism and white supremacy. Not as overt as in the United States, but nevertheless implicit and insidious. She concludes it exists, but it is denied and ignored, remaining a throwback from colonial times that is accepted by its people. It is precisely the persistence of this internalized racism that prevents St. Eustatius from developing in an economically sustainable way. As a consequence, the island remains completely dependent on the European Netherlands.

It had to be an author of African descent to expose these problems. Raised in the US and studied at, among others, the well-known black Howard University, Leslie can analyse poverty and hopelessness from the perspective of racism like no other. White people often fail to recognize racist patterns because they have never experienced it themselves. In the Netherlands, we often see ourselves as very tolerant – and no, we believe we don’t discriminate either! This book shines a light on the reality. It immediately grabs your attention and holds you in its grip until the very end.

The book has become a scientifically based personal interpretation, in which Leslie relies on historical sources, social science literature and her own observations, with useful quotations that do not hinder the flow. The author describes how after the abolition of slavery, the social order, based on race, continued to exist. A small group of white Europeans with land and money continued to rule and dominated a large group of former slaves, the out-group.

“White” remained the norm and white treated the black group as inferior. Leslie makes it clear that if a population group is pushed into an inferior role for long enough, people will internalize this behaviour. They themselves start to think they are worth nothing. Conversely, the whites think they are superior. Leslie also introduces a third group, the so-called buffer group. This consists of descendants of freed slaves and people of mixed descent.

The author repeatedly makes the connection with racism in the US. After slavery, segregation became legal in the US, resulting in segregated schools and health care. It did not get that far on the Dutch Antillean islands. Legalized racism in the US caused African Americans to train their own teachers and doctors. This has contributed enormously to the self-awareness, resilience and cohesion of the black population in the US. This institution building has been completely omitted on Statia.

Independent thinking and being critical is not really stimulated. Statians are generally not proud of their African roots, says Leslie. And well, a lot of good things come from the Netherlands, it is often thought. The decision of the Netherlands to put the local democratically elected government aside in 2018 was accepted, barring some minor protests, and even welcomed by the buffer group.

According to Leslie, there is little commonality on the island and that has a negative effect on tackling the problems. That is also because there is still a buffer group that works together with the white elite and wants to be accepted by that elite. Noteworthy are Leslie’s observations in which she heard islanders say that the Dutch can run the island better than themselves. She does not mean to say that the black out-group does not have a colonial mentality. In fact, the previous government dominated by the out-group did not want to come and talk at the invitation of the Dutch government when it came to investigate administrative disorder on the island. This deprived them of the opportunity to give their perspective on the situation, Leslie says.

Since the population has internalized racial oppression, it is no longer in question. The Statians accept the visions and lifestyle of the dominant group and model themselves accordingly. For example, on the island is a lot of attention towards the thriving trading nation that Statia was in the 18th century. Little attention is paid to the consequences of slavery and the long-term exploitation and exclusion of the black inhabitants. And there is certainly no attention to African history. How beautiful it would be if you could be proud of your African heritage and you really don’t have to be anti-Dutch for that, says Leslie.

Leslie organized the 2015 conference “Raising the curtain on race: internalized racial oppression”. To her disappointment, few Statians took part. “Nobody is interested in your conference,” said one islander. Leslie also writes about outdated historical concepts around race, about prejudice and stereotypes, about movements for black consciousness, about the right to self-determination, good governance and about the role of tourism in the Caribbean: large resorts are popping up, where local people are not allowed to go, beaches are closed and the profits go into the pockets of the foreign owners – themes that play a role throughout the Caribbean region.

Eight years on Statia comes out at a time when a discussion about discrimination has started in the European Netherlands, such as the Black Lives Matter movement, the discussion around Zwarte Piet (Black Pete) and the Dialogue Slavery Past. In addition, Leslie experienced the recent administrative intervention by the Dutch from close up. She is extremely critical of both the intervention in principal and the method of its implementation in practice. The democratically elected island government has still not returned.

Publisher: Boekscout in the Netherlands. Order your book via Boekscout.nl, Amazon.nl, Amazon.com and Bol.com. Statians can purchase a book via This email address is being protected from spambots. You need JavaScript enabled to view it..