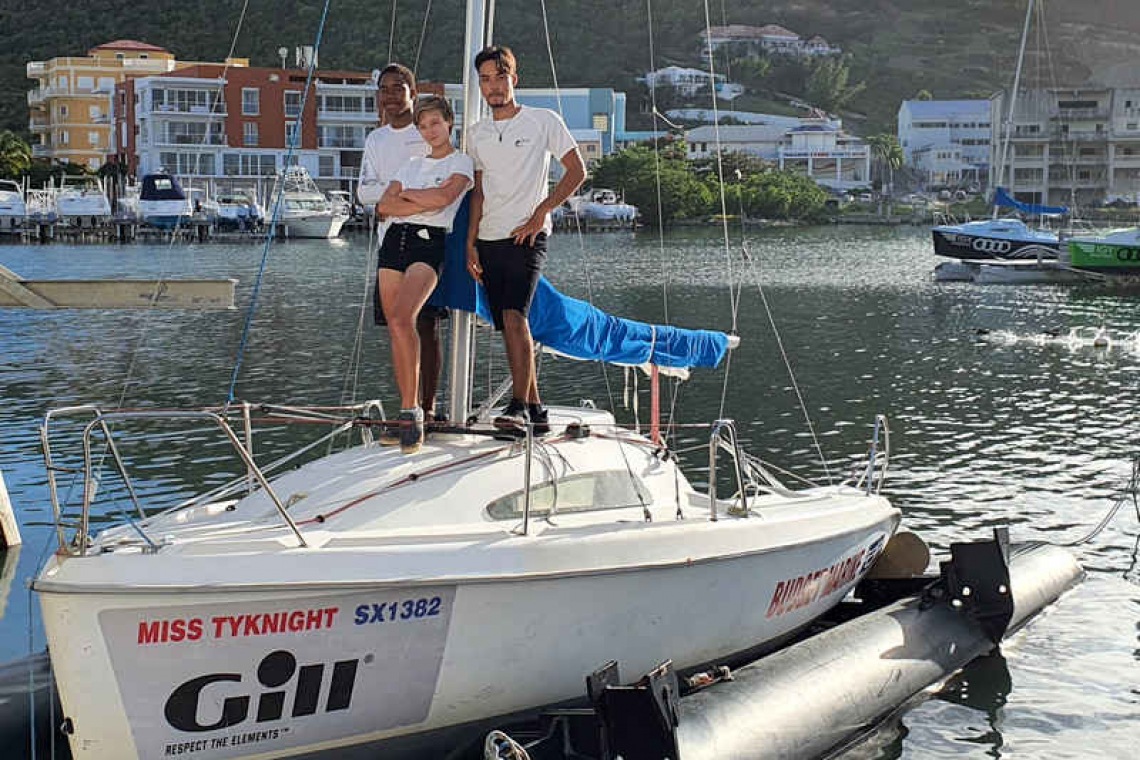 Photo caption: The teenage crew standing on the Miss Tyknight, docked at Budget Marine. From left: Francener, Jordan, and Lucas.

“A smooth sea never made a skilled sailor” is a phrase I’ve always liked, and one that came to mind while interviewing three 16-year-old friends and sailing partners Jordan Pieterse, Francener “France” Faustin, and Lucas Disch. The trio met years ago, already in the world of sailing – training and beginning to race. Together, they were the youngest crew to take part in the 2022 St. Maarten Heineken Regatta.

Right after the Regatta is when I first heard of her, a surprisingly young captain that left quite an impression behind. She asked the crew to come along to speak to me, France the Jib Trimmer, and Lucas the First Mate/ Mainsail Trimmer/ Tactician. The teens talked me through their learning experiences, and what it was like to compete at the regatta and be recognised for it – they came in 4th overall, after racing all four days in the Island Time Class aboard Budget Marine’s Miss Tyknight, and earned a medal, presented on stage, for taking part as a youth team.

The best part, they agreed, was proving to themselves that they could handle all of this, taking on a challenge head-on and succeeding – that, and enjoying a bit of the party scene, of course.

It had been an intense week in the lead up to the races, training every single day alongside their regular lessons at the St. Maarten Yacht Club (SMYC). The word “confidence” kept coming up when it came to describing what it takes to race, as well as what racing helps to build.

Unlike many times when that word is used, “confidence” is impossible to divorce from work and skill in the world of sailing. Each one of them has had to work hard and long to develop – and muster – the confidence that they now have, when it comes to the sport. They need, and develop, both confidence in themselves and confidence in the team. The team’s motto, by the way, is: “Be the flow”.

The hardest part, as I now know, is racing on the downwind. Each crew member recalled this as the most intimidating experience in the races – especially on one of the days where the wind was especially strong, and the seas especially high.

On the worst day, they recall learning right after the race that another boat ahead of them with its spinnaker up had lost control, resulting in two people falling overboard. While they fully knew how hard it was, they stood there and thought “wait…that’s what we were sailing in?” Looking back, they are grateful they hadn’t known about the incident, since it would have caused anxiety – exactly the opposite of what they needed.

Tough conditions really test how much you can control, meaning you have to be extra confident in your abilities, they explained. Whether it’s a sudden gust of wind, or a wave that catches you; “things can go a little bit haywire” – especially on the downwind.

Lucas recalled his first real race at age 14, when he got caught in a “death roll” on a downwind, a scary situation when you can’t stop the boat from tipping side to side.

Both Jordan and France remember their very first sailing lessons, when their boats flipped over in the water. She was 10, he 13. Scared at first; then feeling defeated and helpless; neither had any idea what to do. France remembers thinking the boat might sink, but then seeing others flip it right back over. He remembers the moment clearly – the switch from a feeling of defeat, to realising that that was possible. It’s been three years since, and he absolutely loves racing now.

Jordan has been exposed to the sailing world her whole life, with her father being a sailing instructor. But she also remembers being terrified as a little girl, when leaving her native South Africa for the family to make its way across the Atlantic to St. Maarten. The winds were high when it was time to depart, and she remembers feeling like things could go wrong. The next year, she started classes at the St. Maarten Yacht Club, and six years later now, cannot imagine life without sailing.

For the future, this teen captain hopes to move up to bigger boats, and plans to make sailing a big part of her gap year after high school. “I’m not sure I’m going to be able to do it once I leave for university, but I don’t think I’ll ever really leave sailing,” she told me.

In stark contrast to her fears on the water when she was younger, Jordan now has an infectious confidence, one that helped her to captain at the races this year.

When asked about the best part of the race, France said that he was most excited when facing the downwind, since it’s a feat that normally made him nervous. “When my captain was really excited to go downwind, I was confident that she had it,” he recalled. “There were massive waves, [but] her confidence made me confident.”

From earning a feeling of accomplishment and confidence through hard work, to learning teamwork and pushing through obstacles, it’s hard not to see the value that sailing can bring to anyone that dares to try. “What are the benefits for kids in sailing?” – I asked Jordan.

“It teaches responsibility for self, for boat; and teaches confidence that kids don’t get in any other way,” she said. “I’ve never been so confident in myself and my abilities as much as I am when sailing. It’s a really great thing. It’s fun and I have so many amazing memories from when I was younger, that I think other kids should have too.”