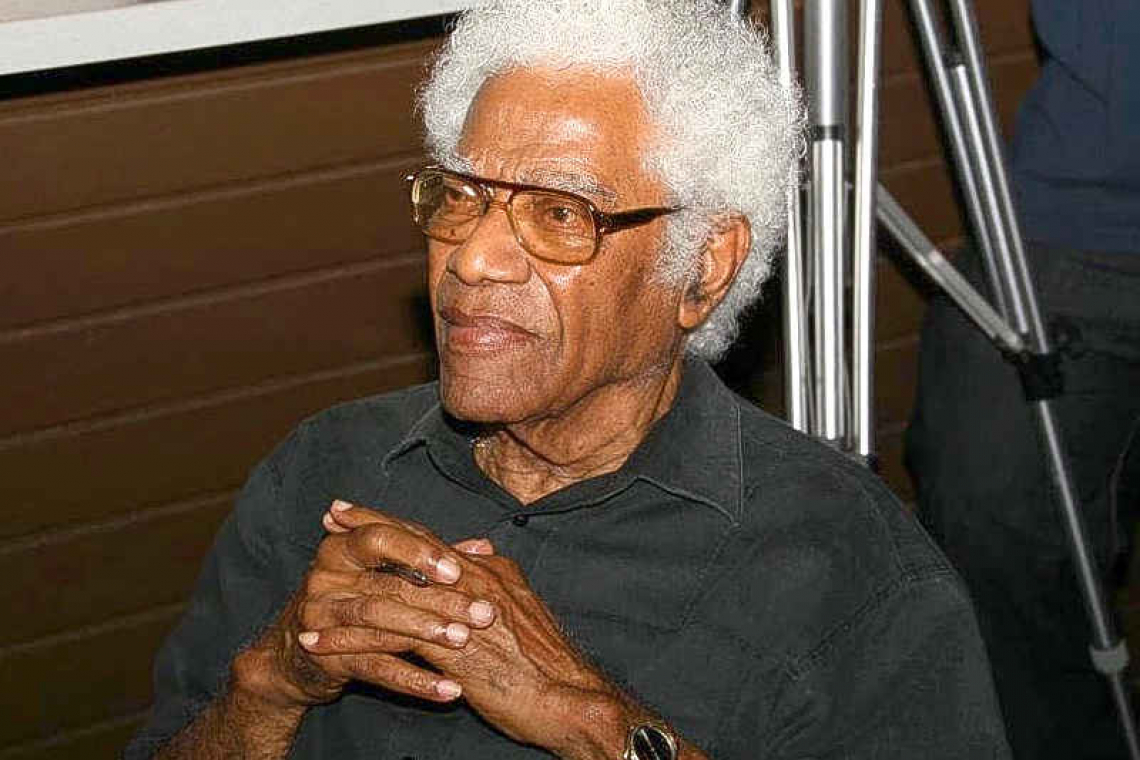 In photo: Lamming, in St. Maarten last year, in discussion with Shujah Reiph for the 30th annual Black History Celebration.

Internationally renowned novelist, poet, and essayist George Lamming passed away in his native Barbados on Saturday, June 4, four days short of his 95th birthday. Regarded as a titan in the world of literature, he is considered one of the most famous writers the region has ever produced. He was no stranger to St. Maarten’s literary community, visiting many times over the years, especially for the annual St. Martin Book Fair where he had earned a President’s Award.

House of Nehesi Publishers (HNP) published two of his last books, including ‘Sovereignty of the Imagination’ (March, 2009). It was the feature book of the 2009 St. Martin Book Fair, held that June. He attended its book party– the high point for the fair’s closing ceremony.

In the lead-up to the Book Fair, HNP President Jacqueline Sample introduced Lamming as an illustrious Caribbean novelist/thinker, and pointed out that for him to “publish a book of this quality in St. Martin, in the Caribbean, is also an investment in his belief and work, in the people and region where his life's commitment abides.”

Local writer Fabian Badejo called it “rich, elegant and intellectually seductive as ever; the thrust always towards a new Caribbean ‘with the sovereign right to define its own reality and order its own priorities’.”

Anthony Bogues, political scientist at Brown University in Rhode Island, called him one of the most important political novelists in Caribbean Literature, based on “the tight relationship between politics, knowledge, language, and the spaces of freedom in Lamming's writings.”

Last Saturday, the main book launch and closing ceremony of the 20th annual St. Martin Book Fair was dedicated to his remembrance. Many on the island have been sharing memories and paying tributes over the past week. Badejo wrote a poem in commemoration.

By Fabian A. Badejo

Silver on his head

wrapped in a big Afro

Thunder on his tongue

they power us on

over hills and storms

Barbadian Prime Minister Mia Amor Mottley announced that an official funeral will be held for him. Singing praises of his contributions, she said that his book ‘In The Castle of My Skin’ ought to be required reading for every Caribbean boy and girl.

Sadly, it seems now that almost weekly, we are forced to say goodbye to one of our national icons.

Today, it is our internationally recognised and respected novelist, essayist and poet, George Lamming, who without doubt stood for decades at the apex of our island’s pantheon of writers. Indeed, George Lamming, must be considered one of the most famous writers this region has produced.

Notwithstanding the fact that he passed away today, four days shy of his 95th birthday, I still declare that he has left us all too soon. In fact, only this morning I discussed with Minister in the Prime Minister’s Office, Senator Dr. Shantal Munro-Knight, my desire to have arrangements made to visit him on Wednesday to celebrate his birthday with him.

Unfortunately, we will now have to switch to a national celebration via an official funeral for a man who has given so much to his country, his people, his region and the world.

George Lamming was the quintessential Bajan, born in as traditional a district as you can get — Carrington Village, on the outskirts of Bridgetown. And his education was as authentically Bajan as one could possibly acquire — Roebuck Boys’ School and Combermere.

Perhaps even more critical to the literary giant he grew into, was the fortune he had of being schooled at the feet of yet another Barbadian great, Frank Collymore.

But as Bajan as he was, he still distinguished himself as a world scholar: teaching first at a boarding school in Trinidad, before emigrating to England, where he became a broadcaster with the BBC’s Colonial Service. This was followed by positions that included, writer-in-residence and lecturer in the Creative Arts at the Mona Campus of the University of the West Indies, Visiting Professor at the University of Texas, the University of Pennsylvania and Brown University, and a lecturer in Denmark, Tanzania and Australia.

Wherever George Lamming went, he epitomised that voice and spirit that screamed Barbados and the Caribbean. And while he has written several novels and received many accolades, none of his works touches the Barbadian psyche like his first — In The Castle of My Skin, written back in 1953, but which today ought still to be required reading for every Caribbean boy and girl.

Barbados will miss George Lamming — his voice, his pen, and of course, his signature hairstyle — but I pray that the consciousness of who we are that he preached in all that he wrote will never fade from our thoughts.

On behalf of the Government and people of Barbados I extend deepest sympathy to the Lamming family. May his soul rest in peace!